A tube heart inside a digital body

The peculiar feature of this Lyric CDT8 lies in its tube-equipped output stage. This should give a warmer and a more analogue-like kind of sound to the digital player. Not surprisingly, there are at least two other Companies (which manufacture in China as well...) that sell two tube-equipped CD players that are very, very similar to this Lyric CDT8.
Another interesting feature is the presence of the HDCD decoding chipset. Though not so widely available, HDCD encoded discs will sound better on a HDCD player like this one.

Considering aesthetics, perceived quality and finish, one can classify this player as "upper-midclass". There are, nonetheless, a couple of things that remind me the usual Chinese manufacture standard.
The front fascia is solid, made of thick metal but the switches do show some free "play" that give the user an unpleasant feeling. Furthermore, the centrally-placed CD tray is - at least on the unit under test - slightly misaligned with the front panel. The green display is easy to read though the light green digits are not exactly my favourite. In the rear you find the usual (good quality) RCA outputs (no XLR). Overall, this unit appears to be living-room friendly and its WA Factor has to be considered pretty high.
The HDCD decoding engine engages automatically when a HDCD disc is inserted. A blue led glows when HDCD operation activates. This clearly isn't a good match with the light green display. The remote control is "out of place", being just an "el cheapo" plastic unit. 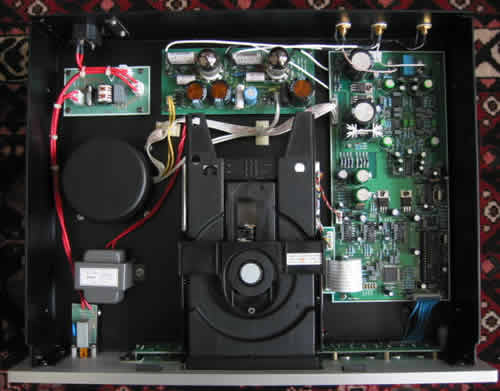 The tubed output stage imposes a warm-up of at least 30-40 minutes. I listened to this player after a break-in period of nearly 300 hours.
Its tonal balance is CLEARLY influenced by the presence of the tubes in the analogue stage: the music flows effortlessly and the balance is undoubtedly on the warm side. On the other hand, this characteristic might produce some alteration and colouration of the reproduced sound, in terms of lack of detail and overall precision. This lack of precision might even affect the sharpness of the 3D soundstage. In my opinion the sound of the Cayin CDT8 is not heavily affected by these side-effects. Indeed, it is warm but still quite precise and detailed while the stage is geometrically well defined (more on this later).
Frequency response appears to be well extended though, once again, vacuum tubes influence the overall balance. The "presence" of tubes is much more evident in the mid range, for example, especially on voices. Here one can experience, more than at the extremes at the audio spectrum, what I dare to call a fully "analogue" sound. 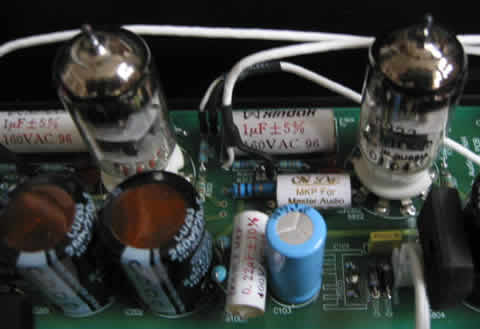 Rhythm is reproduced with good precision, by all means. Only with certain musical programs the presence of vacuum tubes becomes more evident. For example, with highly demanding tracks (hard rock or highly dynamic "jumps") the general smoothness tends to "soften" things a bit more than desirable. Anyway, I can't see this as a completely negative aspect, considering it is NEVER excessive. Call it a natural "inclination" towards smoothness and softness.

The 3D soundstage, as said, is proportionally correct. With nicely recorded discs one can easily detect instruments and players, all well focused inside the three-dimensional space. The width of the soundstage doesn't seem to be excessive. When compared to similarly priced competitors (with all solid-state weaponry) I've noticed a lack of precision in the holographic representation of the musical event.
I can't define the Cayin as imprecise (indeed, it is not!) but there are competitors which may image better, with added precision. In other words, if one desires precision at any cost, he might find this player a bit lacking in this department. In my opinion it is precise without becoming a sonic "microscope".

Its "plus" is simultaneously its biggest "minus". Its sound is really unfatiguing, easy on the ears, dare I say "analogue". Clearly, this player has been designed NOT to sound excessive in any parameter. Classy, without edges.
HDCD decoding is another "plus" though - considering this is not so widely available - I suspect not many audiophiles can benefit from it.

As said, the analog tube output stage makes this player sound warm and pretty on the "soft" side. Many listeners may perceive this attitude as negative. Especially with certain musical programs this player might be not your regular cup of tea.
I'd rather consider this behaviour as a peculiar sonic characteristic, not exactly a negative aspect overall. Instead, I quite disliked the misalignment of the CD tray and the use of a plastic part on it, certainly not "at home" with the high-endish looks of this unit. Balanced XLR outputs are also missing.
Furthermore the cheap plastic remote control is certainly not adequate to the class of this digital player.

The tonal balance of this CD player is certainly warm, thanks to the tubed output stage. Its sound is smooth and relaxed. Perhaps not welcomed by hard-rock fans, this Cayin CDT8 can be listened for hours without experiencing listening fatigue. It can be recommended to those audiophiles who are searching for a mature, mid-class CD player with a classy sound.

Finally, two words about the (VARIABLE...) price/performance ratio of this unit. For HiFi components between 1000 and 2000 € VFM is almost a mine-field, considering what the market has to offer in this price tag. Things become even harder if one adds the fact the Cayin CDT8 can be bought at much lower prices than the one suggested by Cayin. If you are familiar with shopping online you can purchase this player for half of the list price (not from authorized dealers, though)!!!
If one considers the list price the price/performance ratio has to be considered quite good. If, instead, one considers it can be had for less than 1000 € its VFM increases tremendously, making it a little champ within that price range.