I bought one of Scott Nixon's DacKit kits way back in 2003 and have been using it on a regular basis since. With a decent power supply, and Black Gate NXQ output caps, it made a really nice sound. I reckon when it comes to DACs, we will tend to like the sound of a certain DAC chip, and I like the TDA1543. I know of others who say they prefer the sound of the TDA1545, and others who swear by the good old TDA1541. However, having extensively modified the Monica2 (TDA1545), and reviewed the slightly modified Monica3 (also TDA1545), I could hear that they were doing some things better than the DacKit so I decided to modify the DacKit. I gathered as much help as I could from various friendly 'gurus', got the parts together, and went to work with the soldering iron.

I should say to begin with that the quality of the DacKit PCB was fantastic. Looking at the DacKit site I see that the current PCB's look somewhat different to mine so I can't comment on their quality. But I found the one in my DacKit to take a lot of 'punishment' as regards de-soldering and soldering in new items. I've modified some items where the flimsy tracks lifted almost as soon as they got sight of the soldering iron but the DacKit PCB was a dream to work on!

I'm not providing a circuit diagram of the DacKit here at the request of Scott Nixon. DacKit owners will have access to the circuit diagram, and should have no trouble in identifying the components, and parts of the circuit, that I describe in this article. Most, if not all of the mods will apply to other DACs using the 1543 chip and CS8412 receiver chip. 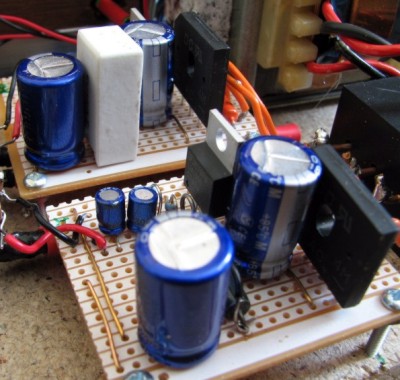 The main emphasis of these mods was on the power supply. Paul Hynes supplied drop in replacements for the LM7805 (A), and LM7808 (c)regulators. But these brought with them my first slight problem. The DacKit has run beautifully on a modified power supply, originally designed to run an Audiocom Superclock. As such, it couldn't supply enough current for the new shunt regulators and had to be replaced. A rummage in my parts box produced a suitable 12 volt transformer that provided the basis for a fairly text-book regulated power supply using the LM1084 regulators. Yes, that is regulators plural as I built two identical 12 volt supplies, one for each of the shunt regulators. Using a regulated supply prior to the shunt regulators may be considered overkill but Paul Hynes told me that it could help, and wouldn't do any harm. The other requirement was to cut the track supplying the original (shared) 12v power supply to the 5 volt regulator. It was then possible to remove the standard LM regulators and solder in the Paul Hynes replacements. I added a 470UF cap on the pins of the 5 volt regulator, leaving the original 1000uF cap in place next to the 8v regulator. I found the type and make of caps used here to have quite an affect on the sound of the DacKit. So much so that I would recommend replacing the original cap with some socket pins, allowing you to quickly plug in different caps. Ironically I landed up with the original cap (B) for the 1000 uF, and a Panasonic FM on the 5 volt regulator. I also found using small bypass caps with the larger caps gave some extra micro-detail.

The PLL filter (PLL) was the next area for attention. I had been advised to change the original filter component values from 1K and 47n to 330R and 470n, and to parallel another 3n3 cap from pin 20 of the receiver chip to ground. Again, the components used in the PLL filter have quite an affect on sound and you should use the best you can find. I finished up using a Black Gate NXQ 470n and a WIMA film cap for the 3n3. The quality of the resistor is also crucial. 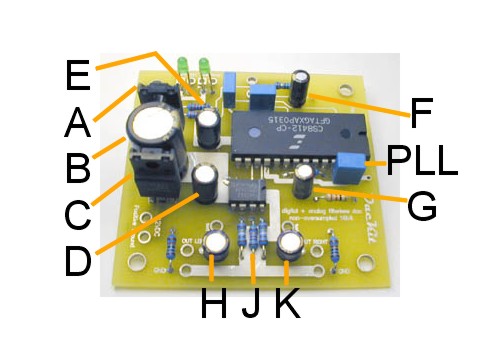 Going back to the power supply, I replaced the 220uF electrolytic (D) that decouples the power supply pins of the 1543 DAC chip, with a 470uF/16v OSCON SG. Fortunately this was a very well used item as Oscons, like Black Gates, can take what seems like an eternity to break in. I actually had to position the Oscon about 10 millimeters off the board as it would not fit in flush due to a lack of space caused by fitting the new regulators. The DacKit PCB is quite compact, and modifying it substantially, requires some careful thought as to how each components is placed. I then added a 1n film bypass cap under the board. The addition of this Oscon made quite a dramatic improvement to the weight of the lower frequencies, and encouraged me to see what other Oscons I had in the box.

For the CS8412 receiver chip, I found a pair of 47uF/16v SG's that I used to replace the decoupling caps (F&G) (pins 1 and 21 to ground). Once again these ware bypassed with 1n film caps (under the PCB) and the improvement they made was quite significant.

Returning to the 1543 chip, I added an 8n2 polystyrene cap between pins 4 and 5. I have since removed this capacitor as I couldn't tell if it was making any difference!

I had been intending to add another pair of Black Gate NXQ's to the two already on the output (H&K) of the DacKit, the idea being to create a Super-E configuration. However, I decided to go a step further (at least I presume it was a step further) and used film caps instead of the NXQ's. I used a pair of polypropylene caps but mounted in them in such a way that I could easily change them when I got the urge. In fact after about a week of listening I felt that something was right and re-installed the NXQ's. They cured the problem that I assume was down to the polypropylene capacitors having too much inductance. It goes to show how careful you have to be in doing this sort of job. You can't just put any old component in any position and expect it to make an improvement! And that's why the advice is always to do one mod at a time, listen to it for a while, and decide if you like it or not before going on to the next mod.

The final tweak was to the Vref resistor (J). Scott Nixon advised me to remove the resistor and temporarily replace it with a 5K trimmer. The resistance of the trimmer is set to the original resistor value of 3K7 and then reduced until the output is distorted. This is clearly seen on an oscilloscope while playing a 1K sine wave through the DacKit. In my case (and it will vary according to the exact voltage supplied to the 1543) I found the optimum value to be 3K2. Playing the sine wave, and watching the 'scope' you adjust the resistance until you have nice round curves. If they start to go flat (ie clipping) then you have gone too far.

The Dackit now competes on level terms with the modified Monica2 and Monica3. I still can't honestly decide which is the best, the DacKit or the Monica3, and there are still a few mods to do to the Monica3. But I am very happy with the DacKit. I was warned that extensive modification may change the sound signature that I liked with the standard Dackit. But it hasn't, and the improvement with almost every aspect is well worth the time and effort spent on this project. I had left options to swap out some of the caps but at present, it sounds so good, I am leaving well alone!