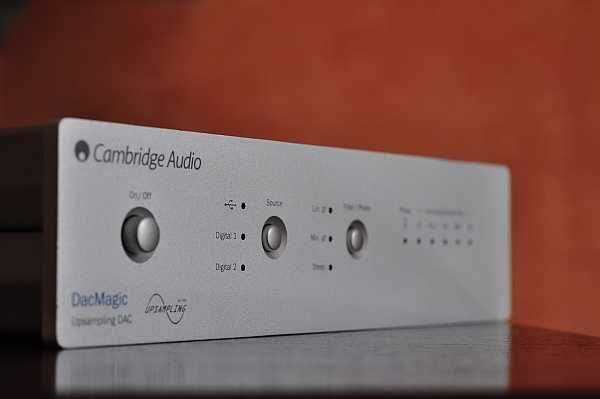 Listening to the DAC of the Common People

In the UK, Richer Sounds is one of the few hi-fi shops still in the high street. Fortunately, even though they have mostly lost their demonstration rooms and turned the space over to selling TVs - reflecting what most consumers are thought to want these days - they do still stock the type of equipment that can get people onto the hi-fi journey. Cambridge Audio is basically their own brand, so the DacMagic is one of the most popular DACs on the market. Reviews elsewhere suggest this is due to more than just good distribution so it's time for TNT-audio to have a look and a listen.

Cambridge Audio has a history of producing interesting but still economical DACs, including the quirky S700 which was in a flat case that doubled as an isolation platform for a transport or a turntable. The first generation DacMagic had a dedicated transport with a clock output to ensure synchronisation between transport and DAC which claimed major reductions in jitter. The current DacMagic also has unusual design features, especially for a budget unit. The most interesting of these is switchable filtration, which I'll come back to below. It's also notable for having 192kHz upsampling performed by a Texas Instruments chip and although this is not switchable it seems to be a very capable implementation.
The DAC will handle 96kHz data streams but unfortunately only through the coaxial or Spdf inputs (of which there are two) and not the single USB input, which limited to 48kHz. This limitation won't affect most people but it's worth noting if you have higher rate files and only USB capability. For those with suitable amplifiers the unit offers fully balanced outputs which are said to offer a slightly better connection.

It's also worth noting that the DAC will echo the incoming data stream to its optical and S/PDIF outputs, so it can also function as a converter from USB to those formats more commonly found on older DACs. 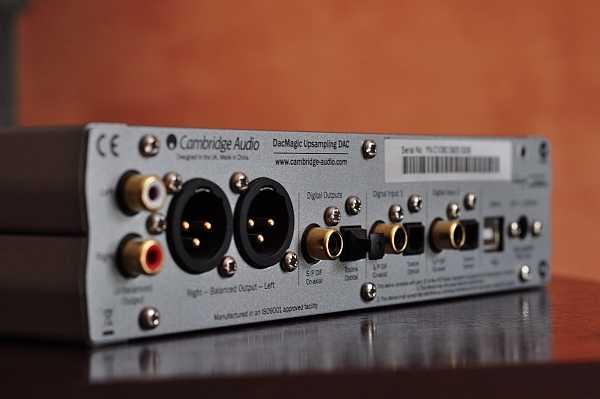 First impressions are fine. It's a small unit, about the size of a car radio, that can be used in the conventional horizontal position in a hi fi rack or vertically alongside a computer by use of a rubber stand which is included in the package. The review unit has a brushed aluminium finish although this colour is being discontinued to leave "any colour you like, as long as it's black". Set up with USB was straightforward - my netbook, running XP recognised the DAC as an audio device straight away and it was pretty simple to configure Asio4all to use it.

The unique selling point of the DAC is that it has switchable digital filters. Filtration is necessary in virtually all DAC devices to remove odd harmonics that are an artifact of the D/A conversion. Different filtration methods offer a different trade off between limiting spurious signals and accurate alignment in time of the processing of different frequencies. Cambridge Audio gives users the choice of three filters and automatically saves the choice for each input. The three options are: Linear Phase, Minimal Phase and Steep. The Linear filter maximises the time coherence with which different freqencies are converted. The benefit is more accurate placement of instruments in the sound stage but the cost is decribed by Cambridge as a small degree of "ringing" around each sample - which seems to equate to harmonic resonance affecting the timbral accuracy of the signal.
The Minimum Phase filter removes some of the ringing at the cost of less time coherence, giving a fuller sound. The Steep filter is a simple low pass filter designed, at the cost of more ringing and less coherence, to stop any noise outside the core audio band. Good stuff for geeks. Probably not something to try and interest your significant other with. Each of the filters sounds very slightly different but they don't have a radical effect on the basic character of the DAC which is lively, detailed and tending towards brightness. The Linear filter produces a detailed soundstage with instruments finely etched but relatively a bit thin sounding.
Minimum phase sounds a bit more natural. The image still has a slight glare but it's pretty listenable. The glare, a sort of very slight electronic resonance, is worse on the steep filter which is the least listenable of the three.

A small criticism is that, unlike most DACs, this one would benefit from a remote control to take advantage of the ability to select filters and to choose between the inputs.
In an A/B comparison using a Cambridge Audio Azur 640C Mk2 CD player as source and set on Minimum Phase the DAC was almost indistinguishable in my system from the CD player itself where my listening confirmed the conclusions in Maarten's TNT-Audio review. The overall impression is lively and spacious. It is capable of establishing a decent soundstage although the bass is a little recessed.
This suggests that the main character of the sound does come from the Wolfson DACs which are common to both converters. It's a very good sound for the money and would improve many cheap sources. It is preferable, to my ears, to a cheap (£80) but good HotAudio USB DAC (using the Burr Brown PCM2705 DAC chip) which is USB only and gives less insight into the music, even though the tonal quality can be more pleasing on brighter material. I was also fortunate enough to compare the DacMagic in my system with a coupleof more expensive DACs (theWyred4Sound 2 and the Antelope Zodiac+).
In this type of company the DacMagic was clearly left wanting although it was not embarassed. Whilst it could not approach the naturalness of the sound of the Antelope or the immense dynamics of the Wyred4Sound it gave a clear impression of the music on its own terms, working especially well on simpler material.

The DAC offers one method of getting good sound from a desktop PC but if that's all you want it for it may be that an audiophile soundcard could offer a more economical route to high quality sound. But changing soundcards is only for those that don't mind messing around under the hood and, unless you have a low noise PC (or listen in a different room), then the whirr of the cooling fans will be likely to have the biggest impact on your listening pleasure.

Many people will be looking at the Dacmagic and comparing it to the Musical Fidelity VDac and Arcam's rDAC, as these are the devices generally available on the high street. I haven't heard the MF device although it has had good reviews. I have briefly auditioned the rDAC and found it a bit harsh and forward. The alternative for USB conversion, at this mid-price range, isone of the many units available from smaller manufacturers, some of which you will find reviewed on this site.
I also compared the DacMagic to the earlier Isomagic S700 model. The newer model showed a slightly higher level of resolution and a more forward sound although I found the relaxed tonality of the earlier DAC still offered a pleasing alternative.

The bottom line is that this is a very well specified bit of equipment, in a fairly sturdy and compact case. It's a very good converter for the money which will get high fidelity sound out of a computer with a minimum of fuss and with a lot of flexibility. It will upgrade cheaper CD or other disc players if the partnering equipment is revealing enough to expose the differences. It presents a reasonable soundstage with good width and some depth. It has an exciting rather than seductive sound that tends towards harshness when the going gets bright. The DAC would do superbly well in, say, a student system with a Tripath amp and a pair of decent small speakers although it would not be out of place in a more expensive system as an economical introduction to using a computer in a high fidelity environment.