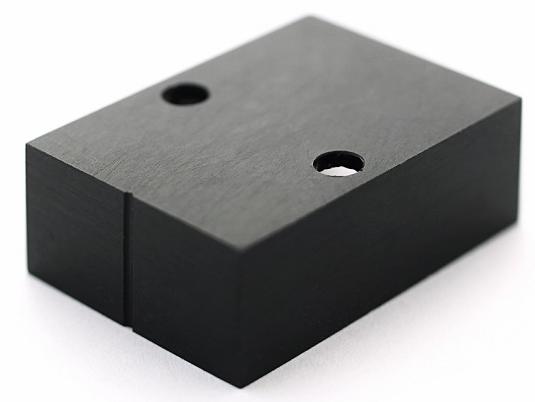 A tweak for an Old Classic

The great majority of readers likely are already familiar with the Denon DL-103 cartridge (see our review here at TNT-Audio) and its long history. For the record, it has been in production off and on since the 1960's and has gained a reputation as being unbeatable at it's price point. With such a history it's quite natural that a lot of ink has been put to paper (and fingers to keyboards) about this cartridge and it has been the subject of some experiments and tinkering. The latest tinker being the subject of this review, an aluminum body cap.  Prior to receiving the sample DL-103 for this review I had zero experience with this cartridge, I don't remember having ever heard it before. So, when this piece came up for review by TNT I volunteered right away as I was quite interested in discovering how a $300. cartridge had become so famous. Also, given that the 103 has a compliance of 5, I figured it to be a good candidate for one of my Lenco  L-75  tables with the original high mass tonearm. The cap and cart would also eventually take a turn on my Dynavector DV 507 Mk2 arm.

I have several Lenco headshells however, due to their age, some of them are not in as good condition as I would like for review purposes and the ones that are good already have carts in them. The same goes for the Dynavector, my 2 headshells already had carts on them. To top it off this test sequence required testing with and without the aluminum cap.  That's a lot of cart to headshell installation.  I think I am up to 8 cart installations at this time! Of course, the 103 doesn't have the same height as my other units and adding the cap changes the height again so I ended up with a pile of different length and different type screws. Every cartridge change requires a preliminary VTA and VTF adjustment, alignment and a final VTA and VTF adjustment. Starting to get the picture? Who said reviewing is fun and easy!

The aluminum body cap was designed by Steve Bedard of Vancouver, Canada and is sold through the web site Denonaluminumbody.com. This is a very slick, professional style web site with all the photos and data anyone could ask for regarding the product. On this web site Steve explains that the mounting arrangement of the DL-103 has long been considered its weakest attribute and the cap was specifically designed to correct this weakness.  The 103 has open bolt channels from top to bottom and the mounting screw head sits on a half circle so almost half of the screw head is of course sitting on nothing. The critics say, and reasonably so, that it's difficult to get a solid mating of the cartridge to the headshell when the screw head is half floating. Also, consider that there is nothing stopping the screw from shifting sideways after installation and thus reducing the mounting pressure. The first thing that came to mind when I learned about this product was “Why did it take 50 years for someone to come up with this idea?” Maybe this isn't the first product of this type for a 103, I don't know. My second thought was “Yah but there are a lot of cartridges made this way, if its important for the DL-103 then what about the others?” In fact, my Denon DL-160 and my $6000. Zyx Universe are made the same way. Maybe a little bit more mounting surface though, but the same principle.

The Cap comes with a paper that clearly illustrates how to install the cartridge in it and how to mount it on a headshell. It also provides the required adjustments for the VTF sand the VTA to compensate for the weight and the thickness of the Cap. The fit and finish of the cap are excellent, it slides over the Denon cartridge with a slight bit of pressure and forms a tight fit with not even the tiniest looseness detected in any axis. The holes in the cap line up perfectly with the cart and make it easier to guide the screws during installation (something that I did a lot). With the cap in place the mounting screws are supported on their full surface area and the 103 is very solidly mounted to the headshell.   So, mission accomplished, the aluminum cap meets the design objective of providing a practical, simple and effective solid mount for the DL-103 cartridge. It remains to determine if this product has any effect, positive or negative on the performance of the cartridge. 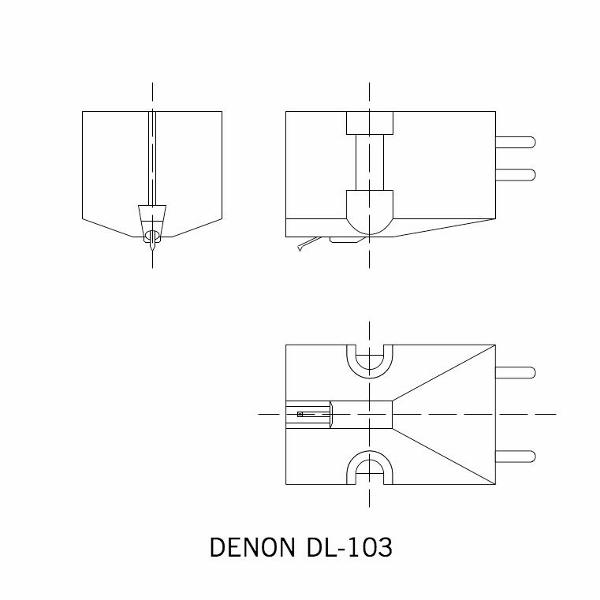 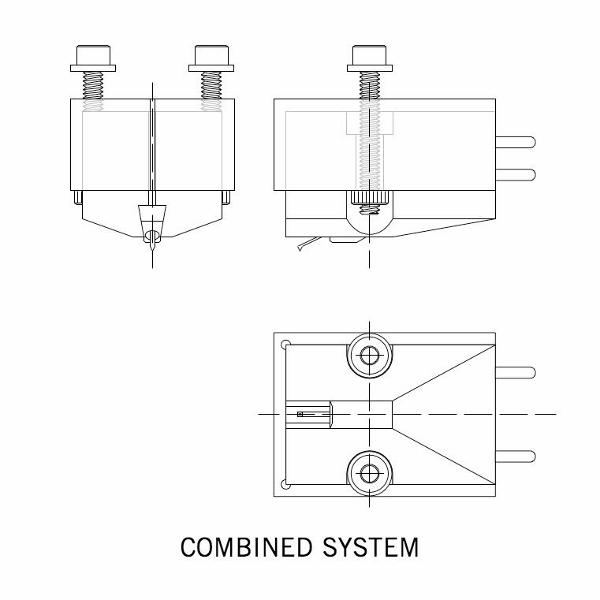 During the tests two phono stages were used, a Pro-Ject Phono Box SEII and a Coincident Statement step-up transformer into the MM stage of my Doge 8 Clarity. Those who are familiar with the Doge 8 Clarity may be wondering how I accomplished this, my Doge 8 was modified at the factory so that a set of RCA jacks originally wired as inputs was connected to the output of the phono stage. All of my sources are now playing through a “The Truth” line stage. More about that magical box in a future review. Both setups were adjusted to the required 100 ohms as specified in the DL-103 manual. The first listening period was done with the DL-103 mounted on a Lenco arm without the cap. I reached the limit of the VTA adjustment with this setup so I had to revert to the original very thick rubber Lenco mat in order to get the arm back to horizontal. The 103 demonstrated somewhat of a split personality as the bottom half of the audio frequency spectrum sounded quite good. The bass and mid-bass was clean and crisp. However, the top half definitely had some problems. Clean and crisp was replaced by some scratchiness and blurring of detail. Overall, the sound was energetic and a bit forward in the soundstage and if it wasn't for the high-end issues I would certainly declare the DL-103 to be a great deal at $300. US. Switching to the Dynavector tonearm, again without the cap, brought some improvements to both ends of the frequency range but the high-end troubles were still present.

I recently read some comments written by a DL-103 user who said that when mated with older style (heavy) tonearms that use a detachable headshell the 103 tends to have improved high frequency characteristics if it is attached to the headshell with a light tension on the mounting screws. The reasoning is that a tight connection to the headshell allows the vibrations of the cart to be transmitted to the headshell-to-tonearm connector where some blurring can be injected into the arm and thus affect the sound. Armed with this theory, albeit totally in the opposite direction that the Cap design is based on, I redid my listening tests on both tonearms with a lighter mounting pressure on the cart screws. In the case of the Lenco arm very little change was detected however the soft mounting on the DV 507 arm did somewhat improve the high-end performance of the 103. Given the design and geometry of the Dynavector arm I am puzzled as to why this occurred as it doesn't really fit the reasoning behind this theory. I would have much more expected the improvement to occur with the Lenco arm! In any case, there was not sufficiently improvement to change my original opinion of this cartridge.

Very little change was noted when the 103 was mounted in the Cap and the Lenco arm. Possibly a slight increase in the bass response. The same test with the Dynavector arm did however generate interesting results. The tonal balance shifted down a bit like adding a bit of bass on the tone control (for those of you that remember the old days when all amps had tone controls). The overall result was fine, it didn't improve the high frequency issues but it did give the music a bit more body. 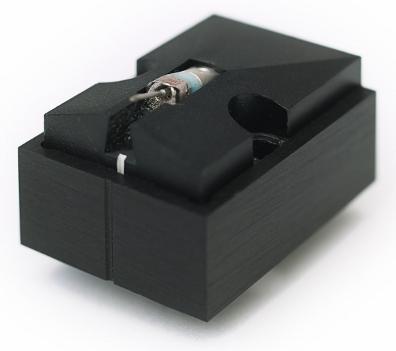 I feel a bit like I have failed at the primary objective of this review which was the aluminum cartridge cap. I just don't have a lot to say about it as I found that my issues with the Denon DL-103 far outweigh any benefits that the cap bring to the setup. Physically, the cap works perfectly, it fits like a charm with zero play and makes the cartridge mounting task quite simple. It of course also provides the ability to snug down the cartridge very tightly as advertised.

The DL-103 cartridge could clearly perform way above it's price point if it wasn't for the issues noted in the high-end, however, what I heard forced me to conclude that a DL-103 would never be part of my cartridge collection. I just don't like this cartridge. I asked myself if I was being too hard on this product, my every day listening is with a Dynavector cartridge that costs 7 times the price of the 103 and a Zyx that goes for 20 times the Denon price tag. But then my Denon DL-160 which sold for, I think, less than $100. more than the 103, when mounted in the Lenco, clearly sounds better. Too bad the DL-160 is out of production, and no, mine is not for sale.

Based on my listening time, I certainly cannot recommend to anyone to go out and order a DL-103 plus aluminum cap. I think there are simply better options at that total cost point. For someone who owns a 103, the aluminum cap may be an interesting and reasonably priced experiment. I can't help but think that there is a possibility that other people have had a better result with this Denon cartridge than I did, that possibly there is something in my testing setup that didn't let it shine. Anyway, I heard what I heard and that's what I wrote. YMMV.

I have been mulling over my results with the DL-103 and can't let it go so I went back to see what Werner Ogiers wrote about it for TNT-Audio back in 2002. I read there; "...the DL-103 sounds powerful and enthusiast." I quite agree with this point and I above described it as "energetic". He goes on to mention "..the 103's limited treble resolution." Bingo!

Here is a partial list of the music played for this review.