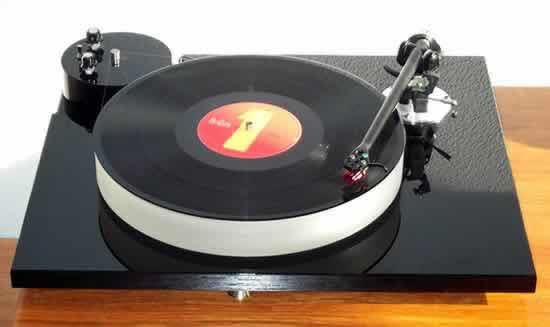 My introduction to the EuroLab RB was an interesting, disconcerting, and enlightening experience. Having been a happy Rega Planar 2 owner for a couple of years, I was interested in an advertisement that I saw in the back of an audio magazine. This ad, from Audio Advancements LLC, touted an upgrade path for the Rega turntable line. These types of upgrades usually interest me for a couple of reasons. First, they allow upgrades to be done in stages, and usually involve less environmental waste than just going out and buying a new component. A good analogy would be to buy a high quality set of tires for your car, to improve handling for instance, as opposed to buying a new car. Usually, for me, these upgrade paths make sense financially as well.

I placed a call to Hart Huschens, Proprietor of Audio Advancements, inquiring about the upgrades, and was told that his shipment was overdue from England. An interesting conversation ensued, where he inquired as to why I was even bothering with the upgrade path (the disconcerting part here) as the Rega, while a classic design, is a turntable that works far better than it has any right to.
The Rega design works so well due to a special synergy experienced by the mating of its not so special parts. For example, many may not know that the gasket between the motor and the wood plinth is really an additional drive belt pressed into service for another purpose. Not in dispute, however is the quality of the RB-250 arm, fitted to the Planar 2: it is a great arm, and an excellent value.

Then the offer was made to review Mr. Huschens' new budget design, the RB. Basically, the RB is an extension of the original Rega design, with all of the shortcomings of the Rega removed. When the turntable arrived at my home, I moved my RB-250 arm/ Dynavector DV-10X4 MKII cartridge combo from the Planar 2 to the RB.

The first thing I would like to do for the uninitiated is shatter some myths about turntables in general, as this is my first turntable review for TNT-Audio. For years, consumers have been told that the job of a turntable is to rotate the disc at a constant (and correct) speed, and the job of the arm is to guide the cartridge across the disc (where all of the "sound" comes from. The assertion here is that the turntable/arm combination actually does very little in the playback chain, and that the cartridge makes the biggest difference in the quality of the reproduced sound.

This ideology is flat out wrong, and in my opinion has been pushed on consumers for two reasons. First, dealers, for the most part, make far more profit from the sale of phono cartridges than the sale of turntables. Also, at face value, the idea is easy for the consumer to understand, which ultimately leads to a sale which is not only easy to make, it is quite profitable for the dealer as well. Unfortunately, this method of assembling an analog playback rig really does the consumer many harms, as there is much more to a high performance analog rig than what most consumers have been told.

In any 'table system, there are what I term "good vibrations" (the signal from the disc), and "bad vibrations" (everything else). Bad vibrations can come from a number of sources, for instance footfalls within the listening room on a suspended floor, and also acoustic feedback. Then there are bad vibrations that originate within the turntable itself: motor vibration, belt vibration, as well as resonance from the plinth and the platter. Add to this the resonance from warped discs, bearing noise, and unwanted airborne vibrations and you will soon see how difficult it really is to design and build a high quality analog playback system. This leads to the turntable under review: the EuroLab RB.

Designed in the U.S. by Hart Huschens, and built in Germany by Thomas Scheu, the RB is a very clean design. There are a number of major features that I have come to believe belong on a high quality analog rig, and the RB is equipped with all of them. First, an item that is really given very little thought by many people: the bearing. A high quality bearing is the basis of a high quality turntable. You can't have a quality turntable without a quality bearing. Poor quality bearings make themselves known by rumble, which will either make bass response muddy, or, at its worst, will make a rumbling sound constantly, hence the name. Second, the RB has an outboard motor with string drive. An outboard motor virtually eliminates all vibrations originating at the motor, and the string drive helps in this regard as well. Additionally, the RB has an easy to use Vertical Tracking Angle scheme, absolutely necessary with such as a tall platter as the optional 40mm version on the review sample. It is my opinion that all turntables should have VTA to adjust for various cartridge heights. The platter, a very tall 40mm acrylic affair, is also designed to greatly reduce unwanted vibration and resonance. The build quality of the RB is excellent, far better than the price would imply.

Setup of the RB was very straightforward. First, the bearing must be cleaned (with compressed air, available from Radio Shack), and mounted in the plinth. Hart did this for me, but I read the instructions, and have no doubt that I could have easily done this if necessary. Then the bearing must be filled with the supplied high quality, low viscosity oil. Then, mount the platter. After that, mount and adjust the arm and cartridge. Then, the unit is placed on the supplied Audio Points (similar to Mod Squad TipToes.) Finally, the motor unit is placed at the rear left of the unit, the drive string mounted around the circumference of the platter. Finally, adjust for correct speed, and the job is finished. I had the review sample up and running in less than an hour.

A really nice feature of the RB is the ability to play both 33 RPM as well as 45RPM discs by just flipping a switch on the motor unit. Speed changes on Regas are accomplished by removing the patter and changing the belt position on the pulley. Additionally, by either adjusting the potentiometers on the motor unit, or by moving the motor unit itself, which adjusts string tension, the speed is fully adjustable. This feature is not possible on the Rega units, and my personal unit runs ever so slightly fast.

The plinth can be custom drilled for a number of different arms. Please contact Hart Huschens for details.

The life of an audio reviewer is fraught with uncertainty. What if I don't like the new component? What if it is possibly a good component, but it just doesn't gel with the rest of the system? What if I can't even hear a difference, much less an improvement? Come to think of it my "audio insecurities" are exactly the same as that of regular consumers.

I have big news for you here. Not only did I hear not only a difference, but also an improvement. It was immediate and unmistakable. From the very first LP I played on the RB (The Beach Boys' "Pet Sounds") I heard two improvements in sound quality. First was a big extension in the bass, it sounds like bass goes at least 1/2 octave lower when played on the RB. Additionally, Pace Rhythm and Timing were greatly improved, it became much easier to "lock on" to the musical ideas of the artist. I attribute this to far fewer unwanted vibrations making its way to the cartridge, allowing the cartridge to reach new heights of performance.

The presentation of the RB was much more "solid" in comparison to the Rega. Both are good turntables, but the RB is in a totally different class from the Rega, as the Rega seems to impart a "lets boogie" tint to its presentation, while the EuroLab seems far more "stoic": that is, it seems to resist adding anything to the music at all. I attribute this to both the aforementioned reduction in unwanted vibration, as well as far better speed stability in comparison to the Rega.

I spent many late evenings exploring recordings that I thought I knew well, sitting dumbfounded at how much I had really been missing. To be sure that I wasn't being seduced by the utilitarian, yet sexy appearance of the EuroLab, I moved the arm/cartridge combo back to the Rega. I wasn't imagining things. The Rega is an inferior unit.

The Rega seemed to get the notes right, but music seemed "more a piece" when played via the RB. Soundstaging was far superior on the RB, especially noticeable on better recordings, such as the Classic Records 45-RPM reissue of Harry Belafonte Sings the Blues. On the track "Cotton Fields", the sax solo in the middle eight hovered behind the left speaker, but about 3 feet above it. On the Rega, the soundstage collapsed, and on the same track, the sax floated vaguely around the left speaker. It was similar to using a 35mm camera: with the Rega, music was slightly out of focus, everything snapped into focus with the EuroLab.

This is not to say that the EuroLab was razor sharp, sound wise. Using the RB-250/Dyanvector combo, music was extremely easy on the ears, and totally free of harshness.

I would have liked to see some sort of inexpensive scheme included with the turntable for verification of proper speed. As the design currently exists, a strobe device, such as the excellent KAB Speed Strobe, must be used.

Finally, the RB's tall platter does not allow my usual method of manual cueing, which is to plant the heel of my right hand firmly upon the base of the turntable and use my thumb on the arm's finger lift. I found I quickly adjusted to using the cueing lever on the arm. This is probably better anyway, as this method is surely to reduce accidents, although, through the years, I have had very few.

I have been advised by Hart Huschens that the RB is available factory direct only. At its price, there is no room left for traditional dealer mark up. If the RB were to be made available through traditional channels, the RB (without arm or cartridge) would cost well over $2000.

Is the price of the EuroLab within my usual "budget" parameters? I think so. While a Rega Planar 2 (currently $499 here in the U.S.) may seem like the better value, it is not. In the end you will probably end up spending $1500-$1700 or so, depending on the arm and cartridge chosen, it is my opinion that it will be less expensive in the long run to go ahead and get the EuroLab. I feel a buyer will be happier with this unit far longer, maybe forever. Of course, those who already have a high quality arm may be able to move their existing arm/cartridge combo from their current turntable, which, of course, will save money and increase value.

The EuroLab RB is a high quality unit, and an excellent performer. The RB is a very good value, the Rega is just inexpensive. The comparisons really end there. I could easily and happily live with the EuroLab RB for years.