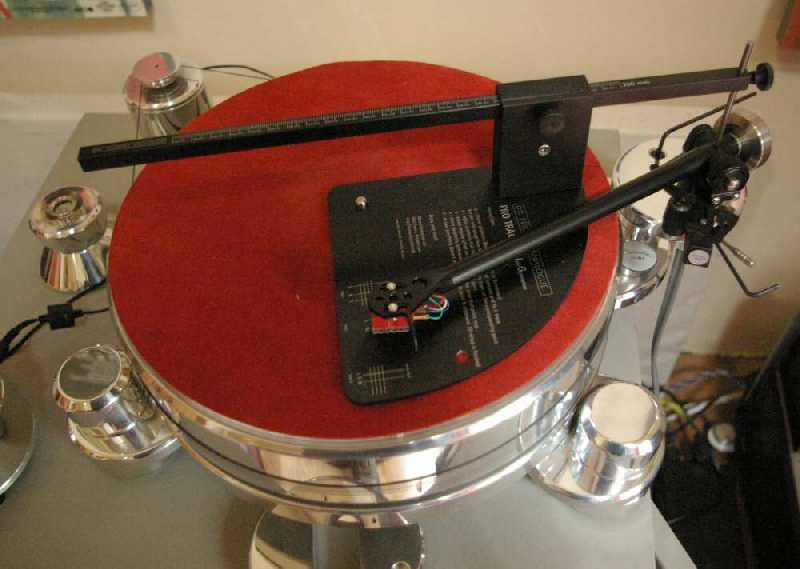 It sometimes seems to me that vinyl addicts, and in particular those swimming in the deep end of the obsession, revel in promoting the 'black art' aspects of setting up a turntable, arm and cartridge. I have to admit to many a wasted hour lying on my back under a Black-and-Decker Workmate whilst fiddling with the entrails of my old LP12 in order to try to get the 'bounce' right. Of course all this voodoo stuff is great for keeping dealers employed (and in some cases rightly so!), but some of the most critical adjustments you will ever make to a vinyl system are generally left to the poor punter, and those are primarily to do with correctly installing a cartridge.

Of course I've done to death the subject of VTA and to be honest it's one of the easiest adjustments to get right, at least on most arms. The other adjustments are VTF (vertical tracking force or tracking weight) which has also been well covered, azimuth (the angle of the cartridge relative to the surface of the disc), offset (the twist of the cartridge in the headshell ) and overhang (the distance the arc of the stylus is beyond the centre spindle). These are shown below courtesy of Dr Feickert so hopefully you get the idea. 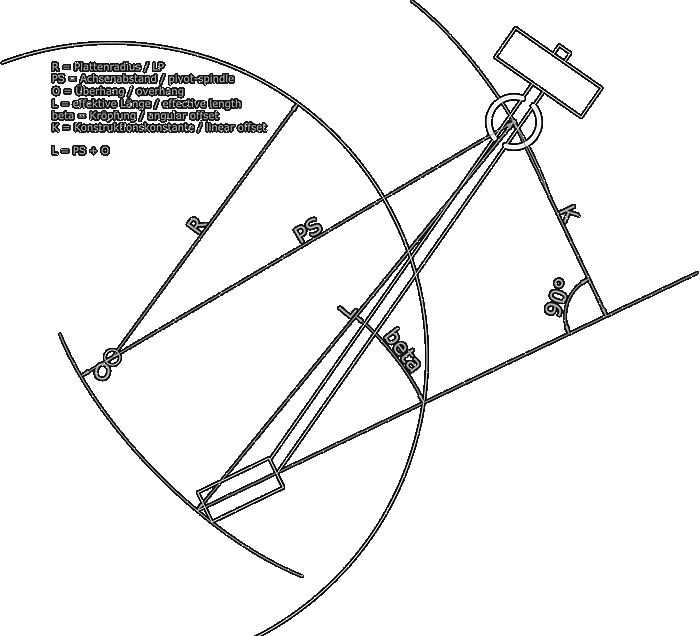 Azimuth is usually judged simply be looking at the cartridge playing a record (or sometimes resting on a mirror) to check the cantilever is perpendicular to the record surface when viewed from the front - easy (but oh so misleading!)*.

The overhang and offset are generally adjusted with a cardboard or plastic alignment template, either provided by the arm manufacturer or some third party. These templates vary greatly in quality, the last one I looked at from a major high-end tonearm manufacturer had a 3mm error in overhang. So before trusting your 5000 Euro vinyl front end to a bit of photocopied paper with a hole punched in it, it's essential to understand just how important these two adjustments are.

What if we get it wrong?

A record is cut by a lathe tracking in a straight line across the record. A pivoted tonearm tracks the record in an arc so will never be able to follow exactly the path of that cutter. However, if correctly aligned the cartridge will in fact be perfectly aligned at two points on the disc - these 'nulls' are generally near the beginning and end of the disc. So aligned, the cartridge will inevitably be in error everywhere else on the disc, but this 'angular offset' error will be as small as possible. The crunch is that small errors in the initial set-up, even a couple of degrees of alignment, or a couple of millimetres error in overhang, can move the position of one, or even both of the nulls completely off the record and so greatly increase distortion. So we need to get-it-right...

An example - the SME V has an effective length of 233.15mm, an overhang of 17.8mm and an offset angle of 23.635 degrees. This gives null points (all according to SME) at 66.04mm and 120.9 using Lofgren alighment. This is shown in Fig 1. The blue trace shows the degree error between the stylus and a theoretical tangent from the spindle - that is how twisted the stylus is relatively to the cut of the groove. The red trace shows percentage tracking distortion, which is derived by taking tracking error and dividing it by groove radius to give a better idea of actual distortion levels.

Now let's see what happens if the overhang is set 2.0mm too long. As you can see from Fig 2 the cartridge now completely misses the nulls!

No doubt any user will then try to align the cartridge on a two point alignment Protractor by making it parallel to the marked lines on the inner reference point. That will indeed give one null, but the other will be even further off the record, and so the cartridge will have an even greater average alignment error.

What about changing the offset angle of 23.635 and giving it a +two degree error = 25.653. Well surprise surprise, Fig 3 the result is that once again the nulls are completely off the record playing surface. In both cases the cartridge will never be correctly aligned...

There is an argument as to where exactly the two nulls should be placed on the disc. Should it be where the average error across the disc is the lowest overall, or do you compromise this in order to have a lower average error over the inner grooves, where because of the slower speed of the vinyl, the stylus is having to negotiate more extreme twists and turns? The three names above identify the most widely recognised 'compromises' - which you choose is up to you, but the Protractor allows all three to be tried out which is unusual in itself.

Enter left Dr Chris Feickert's Protractor. In some ways it simply takes the paper alignment gauge to the max, but in a way that's no bad thing.

The whole thing is made of aluminium, the base a segment of a circle cut in thick alloy sheet (3mm, like a 180 grm record) with the adjustable rule mounted well above pivot height. It is very accurate (no off-centre spindle hole here!) and a doddle to use.

It can be used in one of two ways. First, if you haven't yet mounted an arm you simply slide the rule out so that the markings correspond with the published spindle -> arm pivot distance (in the arm manual). Place the gauge over the spindle, and then the adjustable pointer can be slid down to mark exactly where the arm centre should be mounted - great for drilling a new armboard. You then carry on to the next stage knowing everything should line up!

Alternatively, if the arm is already mounted, it's a question of getting the pointer to be exactly over the pivot of the tonearm. Now here is a snag - it's not always possible to judge exactly this point. It helps to set the rule to the correct spindle/pivot distance, but if the arm is inaccurately mounted in the first place this won't help much. On some arms the pivot position is obvious, on others less so, and as we have seen, an error of even 1 mm is significant. The simplest are unipivots, where by removing the arm-top the position of the pivot can be ascertained to great accuracy. On more common arms it's generally possible to make a reasonably good estimate of position, but a few will always be ambiguous. 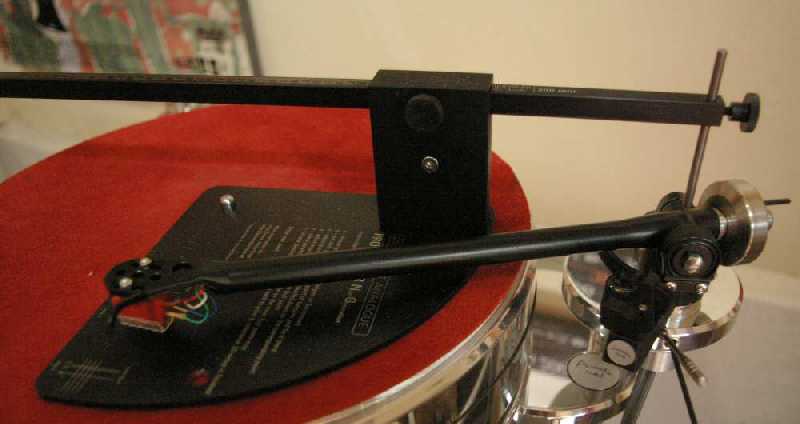 Anyway, assuming you can find the pivot then the next step is to simply adjust the cartridge so that the stylus drops exactly on the 'Overhang' point on the metal gauge. It should be noted that this point is the exact, correct point for each of the three alignments available, and may not be where the manufacturers gauge places it - partly because these are often inaccurately printed, but sometimes because they are wrongly calculated...

Next step is to place the stylus on the outer alignment grid, and by eye set the cartridge exactly in-line with the markings. Ideally you should get right down and make sure the cantilever rather than the body is in line, though that's not always possible with some cartridge designs. And that should be that! To check you then swing the arm to see that the cartridge also aligns with the inner 'null' grid - it should. If it doesn't you go back to the start again as you've made an error somewhere:-) Once done all alignment should be spot on.

If you haven't been able to accurately locate the pivot point then things are a little more tricky. Best to take a decent guess at the position (you'll be surprised how close you'll get, especially if the arm is correctly mounted and the arm/pivot distance accurate). In this case you may well find that the two null points don't quite line up. In this worst case scenario it's a case of moving the cartridge back and forth in the headshell until they do. Obviously this is a little more involved, and of course this does rather negate some of the advantages of the Protractor, but though as long-winded as a normal Protractor this will produce the correct alignment.

I'm not going to pretend that anyone with a 500 Euro turntable/arm can possibly justify spending this sort of money on an alignment gauge. But what the Protractor offers is a quick, very accurate and robust way of accurately mounting and adjusting a tonearm and cartridge. This is something designed to last a lifetime so that does rather spread the cost. But rather like the Cartridge Man's electronic level and stylus pressure gauge, the Protractor is a 'pro/semi-pro' tool. It's ideal for an enthusiast with an expensive turntable and especially if they own several cartridges. For a dealer setting up an expensive turntable for a customer it will reassure the punter he/she is actually going to get something for their money, and their job will be made all the easier. Said dealer should also be happy to lend out the gauge to customers who've just shelled out a few thousand Euro on a cartridge or arm safe in the knowledge that it's tough enough to survive amateurs... Likewise there are thousands of Hi-Fi clubs out there and each could own a suite of such set-up tools (and a record cleaning machine) for members to borrow.

And of course there is another group of people for whom such tools are very useful. I mean of course the small army of reviewers out there. In my case I spent more time than was healthy during my turntable tests making sure that each turntable was set up perfectly and precisely the same - otherwise I'd be comparing a well set up turntable with a poorly set up one. That time would have been considerably reduced if I'd had a Protractor to hand.

*This method of setting Azimuth assumes the stylus is accurately mounted in the cantilever. Sadly this is rarely the case and setting correct Azimuth either requires extensive fiddling by ear, or the us of Dr Feickhert's 'Adjustplus' software – review to follow soon:-)