Unleashing the true power of your audio PC

Sadly, I'm old enough to remember the introduction of cassette tape as a hi-fi medium, never mind the arrival of Compact Disc (CD) in 1982. What was supposedly game-changing about CD was that because it used ones and zeros to store and playback the music signal, it would always produce a perfect signal. Of course that wasn't the case, and soon we were introduced to separate audiophile DACs and better transports, and the hunt for the best digital playback system was up and running. The next significant step forward in digital playback was the use of computers. At first, using a bog-standard PC running something like Windows XP fell some way behind the better quality CD players and DAC's but it was desirable as it made selecting music much easier than finding a CD.. Microsoft were aware of the interest in computer playback, and worked to improve the sound quality that their operating systems allowed. Windows 7 was better than XP, W8 better again, and if numerous posts on various audio forums are to be believed, Windows2012 server, is the best to date. Then there are the various Linux operating systems, but for the sake of this review, I am going to ignore those for now.

If you are still in the 'ones are ones and zeros are zeros' camp, you may as well turn away now. Not only do the various operating systems sound different when playing back hi-fi quality audio, but they can be improved. Of course it is very difficult to subjectively test all this for oneself unless you have computers with identical hardware running two different operating systems. Fortunately, some of the improvements are easy to hear.

Computer audio is gaining popularity for several reasons. First off, it is so practical to have all the music stored on a hard drive, with any album or track available quickly at the click of a mouse button. Secondly, we have come a long way from the first 'audiophile' sound cards. External DACs and converters now offer superb sound quality, often beating the best CDPs. Last but not least, we have available software such as JPlay that is designed to squeeze even better sound quality out of a computer.

But even something such as JPlay has to work on a computer carrying out the rest of its (routine) tasks. If you are not a computer geek, you may wonder what these tasks are. One example is that it has to constantly check to see if the user has issued it with any commands via the keyboard or mouse. It also has to keep on constant guard for improper use of the system by a potential hacker or virus. It has to keep an eye on its file system. It accomplishes all those tasks, and many more, by using 'interrupts'. In other words it interrupts one task to attend to another. And it can do that without us hardly noticing anything because it does everything so quickly.

So, that's how everything is being accomplished in the computer, by being constantly interrupted and, when we play the music back, the computer is not giving its full attention to that job. Like a human being trying to do several jobs at once, it is not doing any one job to the best of its abilities. It's not only the interrupts of the background tasks that can adversely affect sound quality, wi-fi access does too, so shutting that down will make a definite improvement too, as will not using networking. If you control your audio computer using wi-fi, or your music is stored no a network drive, you may not like that idea, and you will then have to decide between ease of use, and ultimate sound quality. Fortunately, the software that I have encountered provides the option of turning off wi-fi, and networking, or not.

For quite a while now there have been hints and tips on the Internet for closing down parts of an operating system to optimize it for music playback. Some years ago, I spent far too many hours messing around with Windows XP on a computer that I assigned exclusively to computer audio. Nearly all the hints and tips that I found on the Internet involved going further into the operating system than most users would like to, particularly so if the computer was also depended on for day-to-day use. What was needed was some way of achieving the same results by running a single application that did all the work for us. There have been several free offerings along those lines, and one that I tried from Computer Audio Design worked well using scripts. However, some of the scripts needed to be executed each time that you used the computer. Better still is a piece of software called Fidelizer, and that is the subject of this review.

Fidelizer is produced by Keetakawee Punpeng who trades as WindowsX, and comes in three versions. The basic version is free to try, and will almost certainly convince you to buy one of the other two versions. The Plus version is free of the nag screens that come with the free version, and improves sound quality still further. Both these versions require the user to run them each time that the computer is booted. The Pro version makes the changes to the computer permanent and does not therefore require running at each session. Pro also offers users further tweaks to improve the sound quality.

I initially downloaded the free version, and tried it on my W8 computer instead of running the CAD scripts. If I was forced to pick which I liked best it would be Fidelizer. The improvement in sound quality is not subtle; detail is improved to an extent where you can much better discern the lyrics of of all but the worst recorded material. Everything else is better defined too. The music comes from a darker background, and the tone is purer, particularly with sounds such as guitar strings. It really is like rediscovering your whole music collection. 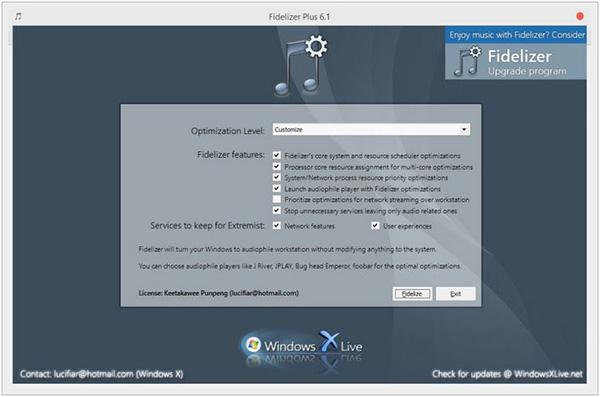 When you run the Fidelizer program you have several options depending on how your computer is used. For instance you may still want to use that computer for tasks other than playing back music, or you may want to optimize it only for audio playback, and get the best sound quality. Here are a list of those options, taken from the Fidelizer web site.

Fidelizer has 4 optimization levels to choose. Default will be Workstation for normal use.

Workstation (For general purpose) – It’ll apply only ‘Fidelizer’s core system and resource scheduler optimizations’ This is key feature of Fidelizer and every Windows should have it.

When you run the Pro version, you are prompted to restart your computer, and then have to wait a little time (probably dependent on the hardware specification) to boot back into Windows while the (many) adjustments are made. The short wait is well worthwhile! I went for the 'extremist' level as I was not using that computer for anything but playing music. Pro takes the quality to yet another level. There is clearly more transparency, enough that you don't have to listen for it. The music comes from an even 'blacker' sound stage, and sounds relaxed but not soft. It's as though you have been listening to your hi-fi just outside of the room, and then gone in and sat in front of it. This is not one of those tweaks where you need to listen for a few days to realise that something has changed for the better. And there's the bonus of just being able to turn on the computer, open your music player, and be ready to play back some music.

Fidelizer resulted in the biggest single improvement to my hi-fi that I have yet encountered!

There's nothing much more to add although I should say that both the trial, and Pro, version of Fidelizer worked faultlessly while setting up, where there is nothing much to do except copy the downloaded file to the Desktop, and double click it to run it. It takes just minutes to have Fidelizer up and running. Neither version produced any problem, and everything worked as it should have. Of course nothing can be 100% guaranteed to work with every system and computer so WindowsX, who produces Fidelizer, offers email support to help sort out any problem if the user encounters one. If for some unlikely reason that you can't get Fidelizer to work on your computer, you will be refunded.

I know that some people are reluctant to pay for software tweaks but you can try Fidelizer for yourself at no cost. The trial version will give you a hint of what this software can achieve, but trust me, the Pro version goes much further, and in my opinion is well worth the asking price. Fidelizer resulted in the biggest single improvement to my hi-fi that I have yet encountered - it really is that good.

Just to make it quite clear, Fidelizer is not a music playback program, you still require something like Foobar or JRiver media centre. And if you already have JPlay, Fidelizer enhances what that does, and is not a replacement for it.