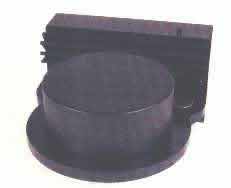 For most of us the first time we heard of a turntable power supply and its importance was with the introduction of the Linn Valhalla board for the ubiquitous LP12. Suddenly we were told good ol' mains was not good enough and we needed this new quartz locked board to make our records sing. Sadly it was a very poor example of the breed, unreliable, but more importantly offering at best a sideways upgrade on the old *basic* capacitor/resistor power supply. But it got us all thinking about the problem and now every serious record deck will have at least one power supply option and the aftermarket is flooded with various *universal* turntable supplies.

Basically turntables have an electric motor which drives the platter. With few exceptions this is an AC sychronised device where the speed and therefore the pitch of a turntable is controlled by the 50hz sinewave (in our dreams...) of the national grid. However we all know that the mains is a mass of nasties and only holds to 50 Hz on a good day. In it's favour it is an almost limitless supply for the demands of a turntable.

Enter quartz locked power supplies. These are nothing more or less than a power amplifier producing a 50 hz sine wave referenced to a quartz oscillator and as such should be perfect for driving a turntable motor without wow or the *cogging* effects of nasties on the mains. However to work properly they need to not only supply a good sine wave, but also to have reserves of power for when the motor demands it such as on music transients.

The alternative, made famous by Naim's Armageddon supply for the LP12 is simply to run the motor via a large transformer which steps down the voltage and acts as a filter to nasties whilst retaining the *grunt* of the mains supply.

The Gyrodec in it's most basic form comes with a power supply based on a very small frame transformer (10 - 20 VA?) and a cap. It's one step up from the simplest supplies, but leaves a lot of room for improvement. However any improved supply has work cut out to make an improvement for two reasons.
Firstly one big advantage with quartz referenced power supplies is that by adding a second quartz clock running at 67 Hz you can have 45 rpm at the touch of a button. However the Gyro must be the simplest deck out to swap the drive belt from pulley to pulley, so this is much less useful than the same feature for an LP12 supply. Secondly the reduction in motor vibration will have less of an effect than most decks in that the Gyrodec is so well isolated from motor vibration. When I first bought my Gyro it had a faulty capacitor in the supply, meaning that the motor's windings received power out of sync.
The vibration could not only be felt at the motor (which has its lock ring exposed so a touch with a finger will show vibration) but the whole Perspex plinth vibrated to the touch. I disconnected the belt and placed the stylus on a record with the motor running and could hear no motor breakthrough no matter how high I turned the volume - a very impressive demonstration...

But even with the cap replaced there is some vibration detectable with a finger on the motor. So I plugged in the Gyropower QC, very easily done with no rewiring - just unplug one supply and plug in the other, and listened. Well first off the motor was very much quieter.
The Gyro uses a high torque 24v motor which spins much faster than the usual Phillips 110v jobs found in most decks. As a result it makes more wind noise, but the hum certainly reduced to inaudible levels from more that a metre or so away. I could feel no vibration at all so the supply was obviously doing its job beautifully.

Oh! I forgot - beautiful. The power supply I mean. John Michell can't seem to make anything without adding the kind of style that got him the job doing sets for 2001 and his turntables in the design museum... It's a beautiful concoction of black acrylic and alloy fins, very like the Alecto Monoblocks.
The on/off switch is placed awkwardly underneath and the 45/33 selector on top. The *top hat* covers a big (100 VA) Toroid with the electronic gubbins behind. Now back to what it actually does :-)

So record on, sit back and enjoy... For a tight fisted sceptic like me the effect was a little disappointing in that it made me want to get my chequebook out... The improvement over the stock supply was quite noticeable. The soundstage became wider and deeper and the images within more sharply focussed. It didn't take apart the music, just let you get more of it.
Bass gained a bit of speed and everything just seemed to have more space. This power supply effect can be demonstrated with any number of turntables, and though it seems to defy logic the improvement it brings is greater than if the money had been spent on a 400 pound upgrade in arm or cartridge (and it won't wear out...).

One of my Favourite test recordings is Verdi's Requiem. My copy is from La Scala and *Dies Irae* is enough to scare the horses... Massive percussion followed by a huge choir going bananas (that's a technical term for loud) presses you back in your seat. With the QC the choir didn't become an awesome lump of sound between the speakers but retained position in the hall.
The actual dynamics were no less impressive it's just that with the QC you were still able to fool yourself you were there. That said you really need the kind of kit capable of showing this kind of improvement. The Gyro is one of the audio bargains out there, especially with the basic supply, so often it can be partnered with pretty basic components. If you are running one with a 200 pound integrated and a 200 pound pair of speakers you may well be better off spending the 400 pound somewhere else.
Again, in the Michell tradition the supply is keenly priced, certainly less than the offboard supplies from most other manufacturers. So it gets my thumbs up, and I would certainly buy one, But.... I'm skint.

So - Taking a leaf out of the Naim book I thought I'd have a go at making a pseudo *Armageddon* for the Gyro. A quick trip to the local electronics shop and voila a tin box, a 24 volt 350 va trannie and a bit of wire. I simply swiped the cap out of the basic supply to give the phase shift and wired it exactly as with the basic supply. Total cost 50 pounds.
I have to admit to a bit of trepidation as I switched it on, but no problems, the platter started to spin and lo and behold the motor vibration and noise was much less than with the basic supply. Sadly in this respect It was not as good as the QC. But there was a pay off. Though the result didn't have quite the etched and detailed quality of the QC there was IMHO greater slam and impact.
That *Dies Irae* didn't spread the choir so beautifully, but boy did it rock! Now I'm not saying that this little 30 minute DIY project is a QC on the cheap, but it does have qualities of it's own - certainly for the *strapped for cash*. Without it I would have found it hard to send the QC back, but with it I could just about manage it :-) (Looks dreadful though...)

Thanks to Michell Engineering - http://www.michell-engineering.co.uk/