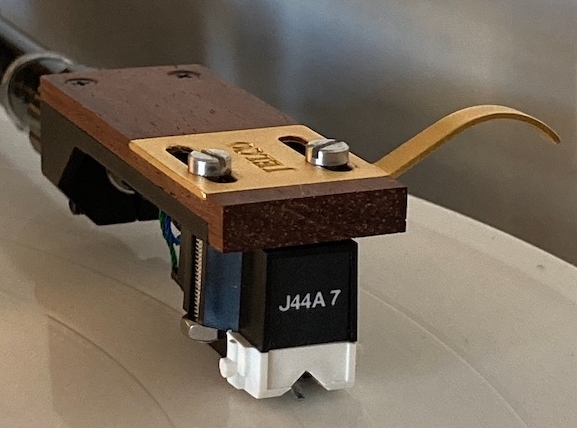 When my wife and I were vacationing in Japan and visiting Kissaten, or listening bars, we found them mostly using Shure cartridges, ones overlooked by audiophiles in the U.S. (in other words, not the V15 type V). If you're not familiar, Japan and Korea are the repositories of a great deal of vintage gear, much of it imported from the U.S., particularly the single-ended triode amps and horn speakers scavenged from the movie theaters that played the first "talkies." This equipment was replaced in the 50s and especially the 60s with the advent of solid state amplificaiton, and much of it ended up in the Far East, whose audiophiles prized the pure sound of low wattage amps and efficient speakers long before the rest of the audiophile world caught on. So, my reasoning goes, if the curators of Kissaten, having rescued those vintage speakers and amps, are also devotees of unloved Shure carts, they are probably worth investigating.

More recently, I saw a piece by vintage/Kissaten buff Rafe Arnott reviewing 6 vintage Shure cartridges. Among them, the M44-7, first produced in 1964 and engineered, according to Arnott, for the viccisitudes of jukebox play. Saving his favorite of the 6 for last, Arnott notes that while not detailed or refined in traditional audio terms, "what the M44-7 does excel at is excitement and attitude because its comportment is adolescent. It sounds big, ridiculously so at times. It sounds bouncy, has a raucous midrange with gobs of between-the-speakers presence and emotional texture. Its top end is a bit soft, but forgivable, and its bottom-end frequencies percolate up from between the lowest octaves with stygian weight and impressive speed."

Arnott, though, was forced to search for used or NOS versions of these carts. Shure, while still making microphones, headphones, etc. stopped producing phono cartridges in 2018. So what's a body to do who has a cartridge body but needs a new stylus or who wants a cart that is backed by a going concern? That's where Jico comes in. They have been producing styli for a wide variety of cartridges, beginning with steel needles for gramaphones in 1940. Notably they produce the SAS or Super Analog Stylus series of complex-shaped replacement styli that reportedly better those of the originals. I've been using Shelter, Technics and Arcam MMs with SAS's for years and admire their lively and precise presentation. More recently Jico have been producing entire cartridges as well as a set of styli sporting cantilevers made of exotic woods, as reported on by Richard Varey on TNT, who also reviewed their JICO SAS Stylus 1 and SETO-HORI Cartridge. And they clearly understand the demand especially from DJs for the M44-7 and so have produced their own version, the J44A-7 IMP.

But first, why would one want to own an MM cartridge other than the generally lower prices than those of MCs? Well, that's a question that has been debated--with, let's say, a lot of passion--on a thread on the AudiogoN analog forum that now exceeds 13,500 posts. There, posters identify dozens of vintage MM and MI (moving iron, a related technology) cartridges that they claim compete in sound quality with many MCs. They present music, they say, with more power and drive than their more refined MC counterparts. And I'll admit that of the 20-some MM/MI cartridges I own, most were bought on the advice of that thread. Granted, most of my listening to these carts is in the background throughout the day when I'm doing other things (reading Internet forums and shopping for vintage cartridges, for example). I save my precious MCs (retipping ≥ $500) for late night listening when that's all I'm doing.

The J44A-7 weighs 5.6 grams, has a hefty output voltage at 8 mV, its recommended tracking weight is 1.5-3.0g (presumably to cater to DJs who use it for scratching), and its hollow, S-shaped cantilever mimics that of the Shure (I think this is the source of the "IMP" for "improved" in the product name). While the cantilever does appear bulkier than many currently available, it does resemble the cantilevers of the Miyajima cartridges, mono and stereo MCs highly thought of in the high-end world. Likewise, one might wonder whether the featured conical stylus competes with similar offerings. The Ortofon 2M Red with elliptical stylus, for instance, costs only $100. And the Audio Technica VM95ML, priced at only a bit more than the Jico, sports a micro-line. Still, we know that designers build cartridges as complete packages, weighing all factors of their design to work effectively together. The Jico comes with a nude conical stylus--all one diamond piece--as opposed to the bonded stylus of the Shure--a diamond chip glued to a metal shaft that's then affixed to the cantilever. This more costly feature should reduce the tip mass and, other factors being equal, offer better tracking. And like its Shure forbear, it comes with a fold-down stylus guard (though I generally remove these to cut down on unwanted resonance). 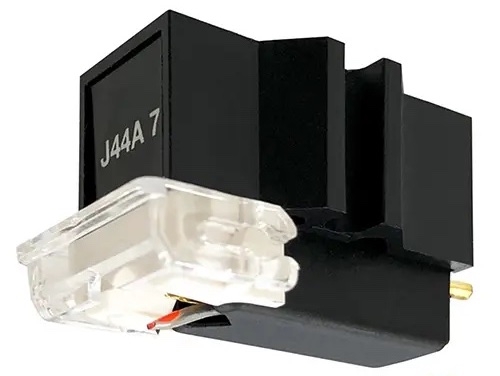 On that 8 mV output figure: The Shure M44-7 has an even higher output at 9.85 mV, both higher than any MM I'm familiar with. This may bring an advantage to systems with low gain. Still, in his review of the 6 Shures, Arnott has this to say: "The higher output alone adds a dimension of power/projection and scale to the sonic signature the [Shure] M97/M91 simply cannot match, and it is not merely an equation of added loudness. The sound stage enlarges noticeably, there is an increase in texture on leading edges of notes from stringed instruments, woodwinds and percussion along with a pronounced emphasis of what I would call 'living presence' to vocals." Although not the first time I've heard it, I'm skeptical of this claim. Still, it's impossible to prove either way unless we had 2 MM cartridges identical except for their output.

I auditioned the J44A-7 on a Teres 245 turntable with Verus rim-drive. Tonearm was a Viv Laboratories RF9 CB on a DIY lead-weighted arm pod. Signal was carried through Discovery cables to a Herron VTPH-1 phono and Counterpoint SA-1000 used as a line-stage. Poweramps were Decware Zen monoblocks into Lowther DX-55s in Alerion cabinets. Interconnects and speaker cables were by Duelund. For VTF, I split the difference in the tracking range, so 2.25g. VTA was level--not so critical with a conical tip.

On two reference cuts from Joni Mitchell's For the Roses, the guitars were big on "Cold Blue Steel and Sweet Fire," but the voice was a bit one-dimensional. On "Barangrill," the bass was full and placed nicely behind the voice. To compare, I tried my "daily driver" Denon DL-109D, another vintage MM, though fitted with an elliptical stylus, in this case a Jico replacement. It offered a more refined presentation; the vocal was more alive, though not as punchy. And for a more familiar reference, I tried a Denon DL-103, this ones plastic body replaced by a Panzerholz one. My notes say "no contest; rich, more fleshed-out." Of course, the 103 goes for at least $300 these days, and you'll need a step-up if your phono stage can't handle MCs.

Also on the spendy side is a better headshell. I'd originally installed the J44A-7 in a cheap aluminum headshell, while the 109D was in a Viv Labs Nelson Hold headshell that sells for $450 on its own (mine came with the Viv tonearm). So I switched them out. The Nelson Hold calmed the brashness of the J44A-7 a lot and also brought out the vocals on the Mitchell cuts. So I tried a Kate Bush 12" "Big Sky (Meteorological Mix)" at volume and was transported to a 80s dance club. Looking for a happy medium, I installed the J44A-7 in a Jelco HS-30, a magnesium headshell with a rosewood/brass top plate. With new AudioQuest wires, the headshell is only a bit more costly than the cart. This controlled the J44A-7 much better than the cheap headshell; a lot of the bold bluster returned, though the Bush cut was not as well defined as in the Nelson Hold.

The J44A-7 is not for every system or sensibility. Not all tonearms will be able to contain its exuberance. Nor will all listeners value its brash approach, say, on chamber music. But for those interested in a lively performer, especially on rock and jazz, it's worth a try for a relatively small (these days) outlay. I've also seen low-cost replacement styli for playing 78s. And then, there's the two wood cantilevers from Jico, one made of black persimmon, the other Christmas berry wood, though once again (isn't it always so in hi-fi?) these will each cost you more than 1 1/2 the price of the cart itself.