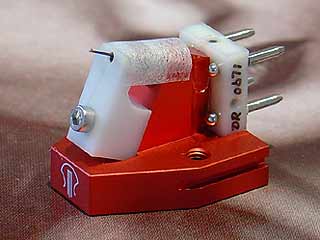 Ever since Ken Kessler's 'Tell Lyra I Love Her' review of the original Lyra Clavis in the April 1991 Hifi News & Record Review did I want to sample something from this manufacturer: such were Kessler's words (*) that I got thoroughly seduced even before I ever met a Lyra in the flesh. Of course, back in those days poor students like me (I was running a Linn Axis with AT OC9 - flat earth disaster area!) could only dream of something like the Euro 1500+ Clavis. Which is what I did, only to forget about it as years went by. During that time I happily moved away from the OC9 to warmer-sounding cartridges (John Michell had introduced me to Koetsu, another unattainable for research assistants): Ortofon MC25FL, Benz Micro MC Scheu, and finally the Jan Allaerts MC1b. But hey, that last one costs well in excess of several current Lyra models, and thus the recent (well...) addition of the most-economic Dorian to the dynasty re-kindled my interest.

Fascinating company, Lyra Audio. Based in Japan, but headed by Norwegian Stig Bjorge and American Jonathan Carr it originally started out as Scan-Tech, trading hifi and making OEM moving coil cartridges for the likes of Audioquest, Spectral, and Linn. In the early nineties Scan-Tech launched its own line of MCs under the Lyra brand name, and somewhat later also got involved in the manufacturing and further development of the legendary, radical, and hyper-expensive Connoisseur Definitions phono preamplifier. 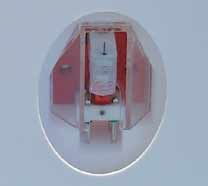 Today, Lyra Audio is a standalone entity (the trade activities were moved over to another company), making its own and OEM cartridges (all of them hand-built by cartrisan Yoshinori Mishima), the ever-evolving range of Connoisseur Definitions preamps, and the Japan-only Lyra Amphion line of affordable CD-player and amplifiers. Stig handles the business side of things, while Jonathan is responsible for all design work - cartridges and electronics - making him something of a true homo universalis in the audio world. Both nice people, too: I chatted with Stig for, oh, half a day at a Bristol Show, and Jonathan is very accessible through his presence on the web's better DIY audio fora: here we have an real ace designer who is not above liberally sharing his knowledge with the hobbyist community.

In order to give their new entry-level model qualities of their upper tier cartridges at a base price Jonathan Carr had to come up with two firsts for Lyra: contrary to all other pickups the Dorian is not fully built and tuned by Mishima, rather, part of the work is done by one specialised subcontractor. Likewise, the stylus is not the usual Ogura, but an off-the-shelf Namiki fine line, a standard component often used my other cartridge manufacturers under the names 'microline' or 'microridge'.

In addition to these acts of economy Lyra devised a new suspension mounting method that apparently was so successful that it trickled up to the higher models to yield the Argo i and Titan i ('i' for improved), effectively spawning a new technological generation for the brand. Perhaps a bit uncommon for an entry-level product to do so, but there are antecedents: the Tsurugi/Lydian laid the foundations for the Clavis and Parnassus, while the later entry-level Lydian Beta was the development platform for the single-piece skeletal body that would characterise all later Lyras. So it seems that the Dorian is merely continuing a tradition that even predates its mother company! 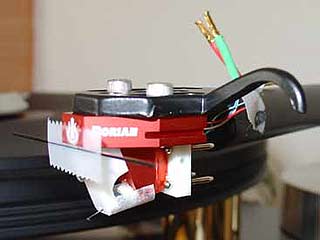 The Dorian comes in a compact box together with a good stylus brush (similar to the one from Last) and bolts of three different lengths. Apart from the colour the Dorian itself looks exactly like the more expensive Argo: a nude design built for structural rigidity in that it consists of one single piece of machined aluminium. Also a modern design, as unlike most other moving coils there are no pole pieces, and the field is generated by two tiny neodymium disc magnets, one behind the armature, one in front of it, suspended in a plastic front piece: this is about the farthest you can get from the classic SPU architecture while still belonging to the breed of moving coil cartridges! The armature is a square plate of permalloy, and carries three layers of copper coils (other Lyras have one or two layers) wound for a higher than usual output: 0.6mV at 5cm/s, sourced from 10 Ohms impedance. This assures a good signal to noise ratio from most preamplifiers.

I found this a thoroughly thought-through design, not just for performance but also for alignment (which puts an upper limit to performance) and daily handling. The threaded holes and the wide upper part of the body, with plenty of straight sides, make mounting it a breeze, while the front allows my trusted Schon method of visually-assisted alignment. This is a far cry from other 'nude' designs such as the Benz Glider. Heck, even my Allaerts, a traditional boxed design, is more difficult to use! The Dorian's rhodium-plated cartridge pins are long and slightly pointed, assuring a good mating with the most reluctant of arm clips. Finally the stylus protector is a wonder, as long as you sit in front of the cartridge while slipping it on. This truly is, in all respects, a cartridge for the twentyfirst century, which is probably why Lyra also market a mono version of the Dorian. This Dorian mono shares the body, colour, and stylus with its stereo sibling, but has a different coil, resulting in a lower output and thus presumably also in a somewhat different character in sound!


Listening to the Lyra Dorian

Allow me to be short: this cartridge is very very good indeed. Yes, the rising response in the treble is audible, but rather than sticking out, this just serves to shine a light on the lower and mid regions, which are exceptionally clean and clear. The treble itself is never harsh or aggressive, and in fact its relative abundance helps injecting some life in the many dull eighties pressings I have, while it never takes good pressings over the edge.

The overall tonal balance is lighter and leaner than anything I've had here since the original AT OC-9. This is understandable: hating bright and thin sounds I only ever seek out neutral-to-warm cartridges. However, while no-one would ever call the Dorian 'warm', I still liked its tonal balance. The reason is that the bass is remarkably powerful and agile, and while the midrange lacks some of the body and lushness of my Allaerts, it sounds very solid and substantial, and vocals are rendered in a very nice and realistic manner. So it may be a bit lean, it definitely is not anorexic or bleached-out.

The full spectrum sounds as a whole: detailed, without artifice, and also without bloom or overhang. This brings a remarkable clarity to the sound, and the overall effect is akin to digital. Digital-done-right, I mean. Musical climaxes are handled in the cleanest way, explosive and without any congestion. Compared to this my Benz MC Scheu (of similar price, but admittedly mine is now nearing 6 years of age!) sounds polite and confused.

I already mentioned the really powerful, extended and well-defined bass, but in general dynamics were very good, too. This is a lively cartridge that makes music sound like, well ..., like something performed by living beings busy doing something they love to do. I think this 'life' is more relevant to our perception of recorded music than tonal balance, so if there is a key to the Dorian's performance then it probably is this.

Stereo images were somewhat compact, both in width and in depth. Placement in that space was excellent, and once in a while the Lyra sounded truly big, but my own JA MC1b never sounds less than grand, in a cinemascopic kind of way. Mind, that MC1b also costs three times grander than a Dorian, so ...

Tracking was wholy unproblematic, and the Dorian suited the Rega RB-300 arm well: the stylus never felt less than totally secure in the groove, and there was no urge to move over to the SME IV arm. Blemishes on damaged records were handled with a lightning-like speed, emerging like bright but short 'tic's and not like drawn-out over-hung 'clank's.

Overall I found this Lyra a very musical and inviting performer that tonally suited my system very well. I was very impressed with its common-sense approach to all things cartridge. Sonically the Lyra's performance is very good for the asking price. I found it significantly bettered my Benz Micro MC Scheu (old model, 1.6mV), and if you allow my aural memory to speak, then it'd say that the Dorian would do the same to the Shelter 501 MkII I tested and liked a couple of years ago.

Of all the cartridges I've met so far this one made one of the very best impressions, and not just because of its quality of sound, which is truly brilliant. There are also the excellent lab results, indicating a near-perfect precision of assembly, and the smart design of body and stylus protector, making alignment easy and handling safe. The Dorian may be a bit wild, but it is certainly not gray: this is a wonderful cartridge in all respects!


(* KK is no Einstein or Edison, but he sure is the audio press's equivalent of Ovidius. It took me almost two decades to see how much more we need this than yet another labcoat reviewer like me.)