No cable, no phono sockets, no volume control - is less really more?

I had only just finished my review of the wonderful ifi iDAC when I received the review sample of the M2Tech hiFace USB DAC. M2Tech's hiFace TWO USB converter that I reviewed earlier this year had impressed me but to be honest, I wasn't expecting anything to challenge the ifi iDAC that had been a quantum step-forward in USB DAC performance. 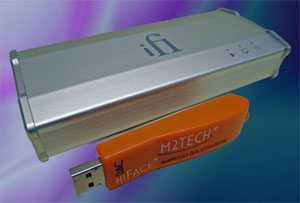 The hiFace USB DAC is quite a bit smaller than the iDAC as you can see from the picture. No doubt, I thought to myself, the iDAC has more inside it that accounted for its incredible performance. There are no phono (RCA) output sockets and the hiFace also lacks the volume control for the (headphone) output. Instead of a USB socket, it has a plug that enables it to be plugged directly into the host computer, thus eliminating the need for a USB cable. I won't repeat my thoughts about that method of connection as I stated them clearly in my review of the hiFace TWO but it's no big deal to use a USB extension cable. Being such a small item (2x1.4x8.8cm), I for one am pleased that the hiFace DAC is finished in a bright shade of orange so that it is unlikely to get mislaid in my rather untidy auditioning room. The output socket is a 3.5mm stereo jack type so you will need either an adaptor (3.5mm jack to stereo RCA), or a lead to do the same conversion. I had an adaptor to hand so that's what I used for the review. If you want to plug headphones into this DAC, they should be medium to high impedance. I wasn't too concerned about the lack of a volume control. It is most likely that a user will be selecting tracks to play so will have access to the host computer, and therefore the ability to control the volume levels at the same time. All this minimalisation of course helps to keep the production costs down.

These are the claims of M2Tech for their USB DAC: 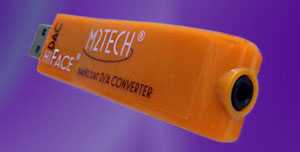 Using the hiFace DAC is thankfully quite straight forward. If it is used with a MAC or Linux OS no driver is required (that also applies to an iPad) and you simply plug the DAC into the computer, select it in 'sound settings', and play music***. Drivers are still required for Windows based operating systems (allowing DS, KS, WASAPI and ASIO modes of play) but I found that the driver installed on my W8 system without any drama.

To commence the auditioning, I connected the hiFace DAC to my PC running Ubuntu (Linux derivative) using a short USB cable. It took no more than starting up the PC, going to sound preferences, selecting the DAC, and then playing music. Unlike the iDAC I liked what I was hearing right from the first few seconds. The hiFace appeared to be more burned in, and although it did improve very slightly over the next few days, the change wasn't as dramatic as it had been with the iDAC. I'm not sure exactly what I was expecting from the hiFace but the iDAC had set the bar so high, I wasn't really prepared for something that would also make me say "WOW". But this was a lesson in not making assumptions because the hiFace had me smiling in no time at all!

In my review of the iDAC, I had commented on the amount of detail that it pulled out of the recordings. Well, the hiFace did exactly the same. In fact, the two sound very close in performance which meant that once again, I was nailed to my listening seat for much longer than I intended. The control over all aspects of the music means that the bass is strong, clear, and tuneful. The imaging is rock-steady with the sound stage being wide and deep. The Q-sound effects on the 'Amused to Death' album by Roger Walters were spread accurately around the listening room, and as far forward of the speakers as I have heard (as they were with the iDAC). PRaT is excellent, and my foot was tapping away to the Paul Simon 'Graceland' track. And, as with the iDAC, this all made the music sound very real. With hi-res material, the hiFace DAC sounded even more superb. In fact it demonstrated the superiority of hi-res material better than most of the DAC's I had tried previously, the iDAC being the exception. There's little to add about the sound of this DAC because it simply does everything so well.

Without knowing exactly what is inside both the iDAC (is the larger case simply to provide room for the extra sockets?) and the hiFace DAC, I can't say how similar they are as regards specification. But in use they did sound very close, in fact probably too close to identify which one was playing in a blind audition. So it wasn't much surprise when I swapped the Ubuntu computer for the laptop running Windows 8 and JPLAY, and found that it didn't make as much improvement as I had found with other DACs (excluding the iDAC). As the hiFace DAC costs only 220 euros, and produces excellent results from an older PC running a free operating system and music playback software, it currently gets my vote for the best budget playback component, although the sound quality is anything but budget! That's not to say that it isn't also a very good buy for those with MAC's, and more expensive computer-based set ups.

I also tried the hiFace DAC with some other power supplies (using both the Elijah Audio, and KingRex USB leads) with much the same results that I had heard with the iDAC. Once again I decided that the results were so good with the DAC running off the computer power supply, the added cost of a separate power supply unit/cable was much less attractive than it was with some other DAC's. It's impressive when a piece of hi-fi sounds so good that the desire to tweak it is almost non-existent, but that is the case with the hiFace DAC, as it was with the iDAC.

Summing up, this USB DAC is amazingly good. Amazing because of it's diminutive size, the fact that it is powered from the computer, and its low price. The iDAC does have phono output sockets, a volume control for the headphone outputs, and arguably a nicer case, but it costs a third more. I can see the hiFace at its lower price being a huge attraction to anybody wanting the 'most bang for their buck. If you already have a computer audio set up, and want an upgrade where you can really hear the improvement, but don't want to break the bank, the hiFace DAC is probably exactly what you are looking for. I can see this little orange DAC becoming a very familiar sight in many audiophile systems. And on another positive note, it also shows that the iDAC was no fluke, and that the standard of this type of audio source is getting noticeably better as time goes on. So is this really a case of less is more? In terms of being a hi-fi bargain, the answer is surely - YES!

During the course of writing this review, I installed Audiophile Linux on a computer and connected up the hiFace DAC to see if it sounded better than with Ubuntu. But I couldn't get any sound out of it despite all indications showing that it was connected, and recognised by the system. I went back to W8/JPlay to check that the DAC was still functioning and it was. I then tried using Lubuntu and got the same results, ie no sound with not just the hiFace, but the iFi iDAC too. It is worth noting that ( at the time of writing) some versions of Linux may not work with these two DACs. There's nothing wrong with either DAC and they comply to USB standards. What is particularly strange is that they worked on Ubuntu (12.04) initially and then didn't at a later date.

I have received an email from M2Tech with a fix to the sound issue on Linux systems. I have tested it and it appears to work - even after a reboot.

It appears that something called udev is muting the two clock selectors. To fix this:

Open a terminal and type in alsamixer

When the ALSAMIXER settings panels appears click on F6

Select the hiFace DAC from the list of soundcards.

Use the M key to toggle the mute function so that you see the following: 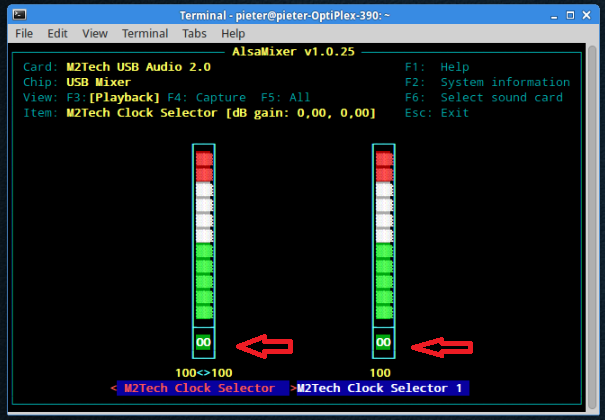 This fix appears to solve the problem on a permanent basis, ie, you do not need to do it each time that you restart the computer. Many thanks to Pietro at M2Tech for this fix.