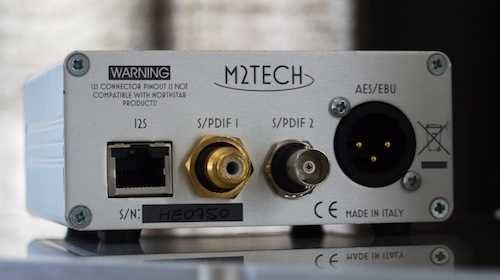 A couple of years ago I purchased an Esoteric SA-50 CD/SACD player/DAC; the plan was to use both CDs/SACDs and computer audio. Well, in short, the major shortcoming of the SA-50 is the USB input. In fact, I only used a computer as a source – typically an iPad via the camera connector – for background music during parties, when everyone was talking. Why an iPad and not a laptop? The laptop simply didn't sound better and the iPad was more convenient. That was until I recently had the opportunity to test the M2Tech hiFace 2 and hiFace Evo USB to S/PDIF output interfaces. In short, both the hiFace 2 and hiFace Evo surprised, with the hiFace Evo allowing my MacBook Air to better an Esoteric SA-50 CD transport.

The hiFace 2 and hiFace Evo are two of many recently developed audio interfaces that convert an USB input signal to S/PDIF output – sampling the incoming signal at rates from 44.1 to 192 kHz. The hiFace 2 does not need a driver for a Mac but requires that a driver be installed for a PC. The hiFace Evo requires a driver for both Mac and PC. In the case of my MacBook Air, the installation of the hiFace Evo driver was seamless. The hiFace Evo also requires a DC power supply – the folks at M2Tech recommend that the voltage be < 11 V DC. I tried an inexpensive wallwart and things were fine; however, I much preferred the also inexpensive Philmore MW122A regulated power supply available at FRY's electronics for ~$25. I used the Philmore power supply set to 9 V DC, and left on for at least 24 yours prior to listening.

At present, I do not have other asynchronous USB converters to compare with the hiFace 2 and hiFace Evo. I'll direct you to recent descriptions of USB to S/PDIF interfaces contributed by Nick Whetstone – especially the John Kenny SPDIF Mk 3 and the Human Audio Tabla – available here on the TNT-Audio site. Here I have taken a little different approach, I compared the MacBook Air/hiFace 2 or hiFace Evo combinations feeding the Esoteric SA-50 DAC to the Esoteric SA-50 CD/SACD/DAC. The SA-50 has three digital inputs – USB, coaxial, and optical. As indicated above, the USB input is suitable for background music. In stark contrast, the CD and SACD playback of the SA-50 are excellent to outstanding – due in part due to incorporation of excellent DACs and Esoteric's VOSP (vertically-aligned optical stability) mechanism to stabilize disc tracking and minimize read errors. This seems a reasonably challenging test for the hiFace Evo.

For comparisons I used iTunes to rip each CD to the (solid state) hard drive in Apple Lossless or AIFF. Amarra's flat filter response was used for computer playback. Esoteric's 4x upsampling was used for most comparisons; 1x and 2x upsampling were also compared and did not alter the overall conclusions. With the Evo I used both an optical toslink and a DH labs coaxial cables for the comparisons, and found little or no sonic difference between the two.

The Macbook Air/Amarra combination with USB output running through the hiFace 2 sounded surprisingly good – even given the excellent reviews that it has received. Out of the box the system with the hiFace 2 sounded a little rough, with a bit of digital grain that causes listening fatigue. I let the hiFace 2 break in for about a week and little or no digital grain remained. The music was there. Soundstage width, height, and depth were good. I was so surprised that I just played music. As I listened I could clearly tell that there were differences between the MacBook Air/hiFace 2 and the Esoteric. I thought that the MacBook Air/hiFace 2 had more bass, but something was missing. The hiFace 2 provided a narrower soundstage, and less depth than the Esoteric VOSP transport. Then, after a while, the computer battery ran down. When I plugged in the charger everything changed – albeit slightly – for the worse. A bit of digital grain had returned. I unplugged the charger and all was good. I swapped USB ports, little or no difference. Thus, at least on my MacBook Air, the hiFace 2 sounds better when the computer runs on battery. This should not be surprising given that the hiFace 2 runs using power from the USB connection. All remaining descriptions of hiFace 2 were conducted with the computer running on battery power.

Next, the acoustic version of Alanis Morissette's Jagged Little Pill. When listening to You Oughta Know the kick of the drums and crisp bass were excellent when played through the MacBook Air/hiFace 2 combination – in this case better than through the Esoteric SA-50 transport. In contrast, the vocals were not as natural when played through the MacBook Air/hiFace 2 combination – her voice was too edgy. This was especially noticeable during Hand in My Pocket and Forgiven. Finally, I listened to Ray Brown playing Georgia on My Mind. Again, the bass seemed a bit punchier, better articulated. But again, the guitar seemed too sharp, too detailed, and less real.

In summary, bass appeared slightly more present, more controlled, and perhaps deeper with the hiFace 2, whereas the Esoteric transport's midrange, highs, dynamics, imaging, and soundstage were better. The subtleties, space, and overall presence of the music were better with the Esoteric transport. Thus, although the hiFace 2 allowed enjoyable computer audio, this was a clear win for the Esoteric VOSP transport. That said, the hiFace 2 always seemed to sound better the longer it played. I could not tell whether this was because the hiFace 2 was still warming up, or because I was adapting to the sound. In the near future I plan to make USB cables that allow me to use an external 5 V DC power supply. These would remove problems associated with getting USB power from the computer and allow the hiFace 2 to be fully warmed up (> 24 hours) prior to listening. Based upon Nick Whetstone's review of the hiFace 2 and my experiences with the hiFace Evo (below), I anticipate hearing marked improvement.

So how does the USB output from the MacBook Air/Amarra running through the hiFace Evo compare to Esoteric's VOSP transport? In short, very well. I started the comparison with the Cowboy Junkies playing This Street, That Man, This Life from the Live! CD. This track has a deep, wide soundstage set behind the speakers. Listening to the Esoteric transport gave the anticipated bass reverberations, echoes, and overall sense of space within the soundstage. Listening with the MacBook Air/hiFace Evo combination yielded a deeper soundstage with similar width and height. Vocals and instruments were more firmly placed in the soundstage. This more expansive sense of space was something that I had only previously experienced with good vinyl setups. The sound overall sound was excellent – highly detailed and not fatiguing. In addition, the bass was tighter, fuller, more impactful, and deeper.

Measurement of pink noise and 1/3 octave warble tones at frequencies from 25 Hz to 1 kHz confirmed that MacBook Air/hiFace Evo combination did indeed give more base at frequencies below 200 Hz. In fact this combination was flat to below 40 Hz and only -5 db at 31 Hz. The SA-50 CD transport rolled off slightly below 200 Hz, to a level ~ 5 db quieter at 40 Hz. I had previously made the similar observation that the bass from my turntable was also deeper and more impactful. These data suggest that the SA-50 CD/SACD – and specifically the CD/SACD transport – is slightly attenuated at frequencies below 200 Hz.

When listening to Music For Two by Bela Fleck and Edgar Meyer the MacBook Air/hiFace Evo combination again seemed a bit too detailed. My neighbor came over to join me for a listening session and agreed, saying that it was as if each note had a halo around it – and not in a good way. The overall sound of the MacBook Air/hiFace Evo combination was good, maybe excellent, just not to the level of the SA-50 CD player.

So I began to play. Changing the level of upsampling (4x, 2x, or 1x) in the SA-50 DAC did not alleviate the problem. However, changing the digital filter from FIR (finite impulse response) to S-DLY (a delay filter) helped – the sound became more natural. I then shifted my speakers an inch or so closer to each other and then, after a bit of trial and error with the toe-in, found the spot. I went back and listened to the Cowboy Junkies, Townes Van Zandt, and Bela Fleck and Edgar Meyer. The MacBook Air/hiFace Evo system was now better balanced, more natural, still impactful deep bass, and still detailed, just not overly so. Amazing what tweaking the speaker placement can do for sound.

For a final comparison I chose a more challenging selection, Requiem performed by the Choir of Westminster Cathedral. I was pleasantly surprised with the performance of both the CD/SACD player and the MacBook Air/hiFace Evo combination. Simply beautiful. The MacBook Air/hiFace Evo system benefitted from enhanced base, but otherwise the overall sound of the systems was similar. That said, on some tracks the SA-50 transport sounded more polished, smoother. At this point I cannot say whether the Esoteric SA-50 was smoothing or covering up deficiencies in the recording, deficiencies that the MacBook Air/hiFace Evo exposed, or whether the SA-50 CD transport is a bit less digital, and this was the characteristic that I was hearing in those tracks. Otherwise, I had trouble comparing the two systems because I found myself simply enjoying the music.

Well, I can no longer say that I have not heard a high-end computer based source in my system. The M2Tech hiFace Evo revealed the potential of the MacBook Air running Amarra as high-end source component. I am impressed. I have found that for many/most recordings I prefer the MacBook Air/hiFace Evo combination to my CD player. The hiFace 2 is also an amazing device that allowed me to enjoy my MacBook Air as an audio source. And while it lacked the naturalness, refinement, and soundstage of the Evo, it is still an excellent value. Based upon the observations Nick Whetstone made during his review of the hiFace 2, and my experiences using a charger to power my MacBook Air, I believe the hiFace 2 can be substantively improved using an external power supply.

I am left rethinking how I would assemble digital front end for a high fidelity system. Previously I would have recommended starting with a good used CD player such as the Ah! Njoe Tjoeb 4000 or, if finances allowed, one of the excellent Esoteric CD/SACD players. However, if I were putting together a digital front end today I would use my MacBook Air, a stand alone DAC, and one of the new generation of asynchronous USB-S/PDIF converters. And if you own a a high end DAC without an outstanding USB converter, I would highly recommend auditioning the M2Tech hiFace Evo.