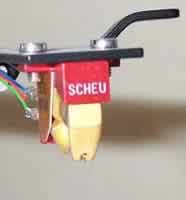 Probably doesn't ring a bell. Allow me to explain, then.

Thomas Scheu is a German engineer and machining shop owner with a charitable nature (or so I imagine him). Some years ago he started making turntable parts, then kits (serious kits), selling them at prices that seemed too low for the quality on offer. While visiting fellow Analogue Addict Hartmut Quaschik in Munchen I got acquainted with such a DIY turntable. It seriously triggered my interest. 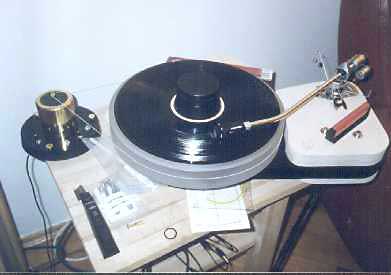 Now, a couple of years later, things have grown a bit. Now including exposure to the rest of the world. To wit, Scheu's delicious turntable kits are, in a lighter version, marketed in the USA as Eurokit (how do you like that name?), while some design and manufacturing input is given to the range of seriously high-end Amazon battery-powered record players. And of course, the original, affordable Scheu turntables can still be had in Germany and thereabouts.

But a turntable alone does not make music. So there came two unipivot tonearms, a 9" and a 12". 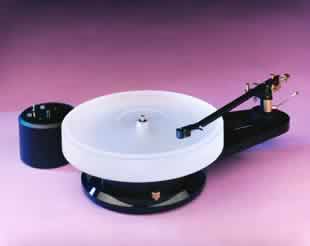 And a cartridge. Not a Scheu design, but decidedly Scheu-inspired (that charity thing again). Handmade by Albert Lukashek of Benz Micro, the MC Scheu is a cross between the latest Glider and Ruby models. Available with Gyger S 5x120 um fineline stylus, and in standard output (1.6mV at 3.5cm/s) or low-output (0.3mV).

Lows and highs of moving coils

I used to sneer at high-output moving coils. After all, many of that breed aren't/weren't exactly to write home about. Then again, it is a breed mostly confined to the budget class. Small wonder then. My interests in something with output voltages in excess of 500 microvolts were suddenly sharpened when I found myself designing a JFET feedbackless phonostage for MMs, but entirely without a suitable cartridge. Maybe the benefits of that preamp's simplicity could be offset against the necessarily heavier coils and higher impedance of a high-output MC. A reasonable compromise seemed possible, and suddenly a formerly-despised breed of cartridges attained rather attractive qualities!

After some negotiations I had the 1.6mV Scheu where I wanted it. Or almost. It was still my job to move it from its box to the business end of my tonearm.

Not an easy job, this, and certainly not one for the faint-hearted. To avoid housing resonances intruding on the performance, the MC Scheu is a totally naked, skeletal design. Such X-rated cartridges seem to be de rigueur these days (Lyra, Van den Hul, ...), but interestingly, the - also wonderful - Jan Allaerts moving coils tackle the same vibration-transmission problem with a very large, very light housing only loosely attached to the cartridge's main structure, thus avoiding the ingress of dust and dirt. Seemingly a better solution.

Be prepared to spend half a day on meditation before attempting to build in this MC. As for me, I was all to happy to own an SME IV tonearm, its hands-off approach to cartridge alignment taking away part of the risks. And luckily the long, dark, and totally exposed cantilever sure is a good aid in getting things as they should be! VTA was set with the arm's tail slightly down. The cartridge's mass is a low 6.6g, meaning that the SME's counterweight ran very close to the bearing.

The MC Scheu comes in a small box, together with a round spirit level, non-magnetic screwdriver, and an individual measurement sheet. Frequency response is almost ruler flat from 30Hz to 20kHz, with a downward tilt: the bass sits 1.5dB or 2dB above the highest treble. The high-frequency resonance peak so typical of many MCs is almost entirely absent here. Also very impressive is a huge channel separation exceeding 35dB in the midband, and still reaching 25dB at 15kHz. Benz claim an excellent channel balance better than 0.5dB: with many competitors the norm is 1dB or even worse!

Despite a 40 Ohms source impedance there was no trace of hum in my setup, and I even could leave the tonearm's ground wires unattached. The cartridge directly fed the gate of the first FET in my phonostage, this a 2SK170 working entirely without feedback. Passive RIAA and a second stage of a cascoded 2SK170 completed this preamp, for a total gain of 44dB or so. Load was 1k, which is a minimum for this cartridge. The alternative phonostage used was an opamp-based Trichord Dino, set at 48dB and 1 or 47 kOhms, and sometimes fed from a large Trichord HR power supply.

Tracking at 1.9g (measured on the Shure gauge) didn't sound totally secure and the first distress on the Hifi News test record could already be heard on track 2, whereas my Ortofon plays even track 3 without buzzes! On actual music, and re-set to 2.0g, the Scheu tracked well and even seemed to do better now than the MC-25FL. (I didn't re-check with the test record.) Its handling of noise and surface blemishes also was excellent, a god-send given the second-hand origins of 50% of my LP collection.

I find that budget moving coils, such as my own Ortofon MC-25FL, while very good for the money, increasingly sound like approximations when climbing the scales. Listen to a triangle, for instance, or cymbals ... But after only fifteen hours in the groove the Benz MC Scheu delivered a resolution in the midrange and treble, a wealth of refined detail, and a sweetness that put it into another league altogether. 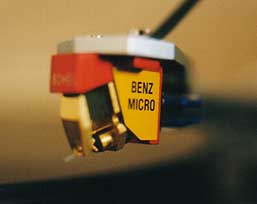 As a result of this insight and musicality, the Scheu helped making sense of complex music like Joe Jackson's. It did so by clearly unraveling the separate strands and lines played by individual instruments, even at crowded passages, while, luckily, keeping an eye on their interplay.

With all phonostages used the Scheu succeeded in painting a remarkably wide soundstage, with good and stable lateral positioning. Depth too was rather fine, certainly a cut above my own Ortofon's performance, but ultimately not in the same holographic league as e.g. the Dynavector DV-1 at Geoff's (I know, I know: differing systems and rooms, etc, but what that Dyna does still is to die for!) Synthetic sound effects (Trevor Horn-produced eighties records!) were often projected forward with a force, stability and specificity that made me wonder where the 5.1 surround system was hidden.

Tonally, I had expected a certain lushness, given the directions from where I got the Scheu recommended from. Well, in the end this turned out not to be so: the MC Scheu certainly is not a vintage Koetsu on-the-cheap (then again, even today's Koetsus aren't overly lush anymore). No, the Scheu was neutral, with controlled treble that never went bright. Slim and clean with the Dino and Era phonostages, a bit warm with the more tube-like FET preamp, and always sweet and utterly without tracing nasties.

Bass, while not overpowering, was nimble, tuneful, and very well contoured. In fact, the bass of the Michell/SME/Scheu combination was now well ahead of my usual Rega/Hawk CD source, with good detail, a decent portrayal of atmosphere in the lower registers, and a lot of slam. Bass also went deep, but again, it wasn't very weighty.

Resolution and overall openness were very good. Musical strands were kept separate and audible throughout, meaning that temporal and spacial (lateral and fore-aft) separation are well indeed. This may seem contradictory with a slightly soft-focus sound, i.e. the sound sources themselves were not overly etched. Voices were not forcefully portrayed, but otherwise were very detailed and characteristic of the individuals behind them. Midrange quality was fine, very much 'singing'. Dynamics were fine too, although the Scheu can be classified as a mite polite and laidback.

Of course it is regrettable that I did not have a 'real' Benz Glider to compare with, or for the matter Benz's new economy-Glider, the ACE. Nevertheless let it be clear that the Scheu is a very competent cartridge that bridges the gap between 'budget' moving coils and true esoterica by offering a large part of the finesse, control and composure, and the utter lack of nasties, of the latter, even if the sonic fireworks are somewhat subdued in the process (but not by much). Tonality is even-handed and neutral, and the handling of less-than-pristine vinyl is excellent. Yes, the big cartridges do still sound better, and by a considerable amount still, but do you really want to invest $2000-3000 into a thing with a limited life?

In most export markets a Glider costs more than a Scheu. And the latter, at least when directly bought from Germany, does not cost that much more than the list price of typical middle ground MCs such as the MC-25FL, DL-304, Blue Point Special, or Dynavector DV-20. A bargain seems to emerge ...