The music player for music lovers

Authors Note: Bit of a spoiler alert, I have now become a lifetime subscriber of Roon. Other than that, I am not affiliated with Roon in any way.

I have seen various software platforms reviewed over time on TNT-Audio, from Audiophile Linux through the most recent, J-Play Femto. I have always been a little bit of a computer nerd, so I have played with Fidelizer on Windows, used iTunes with various modifications, graduated on to MusicBee, even horror of horrors, the Spotify client. Actually the client is pretty good, you are just limited to 320 kbps Ogg Vorbis. I cannot remember where I stumbled across Roon, but the clean interface of Roon 1.1 was nice, it organised my library and ran well on the little nettop computer that I was using at the time. That was all well and good, but Tidal had not yet launched in the US at this point, so I was doing dual time with Roon and the Spotify client and I could not justify the extra expense. Then Tidal launched in the US and Roon integration came along and a trial with it. For a while, I was running the Tidal app on my Windows PC, but it did not have the best user interface at the time and it did not integrate my music. I circled back around to Roon and spent the money on both the Tidal subscription and the Roon year long subscription. An update to 1.2 and 1.3 brought significant upgrades and I was happy.

So what is Roon? In their own words it is “The music player for music lovers”. Spinning out of Sooloos music server that was developed under Meridian ownership, it became its own entity a few years back. Firstly, it is not just about the sound quality. That can be very good, but it is more about connecting back to music, in a way that the old iTunes and Windows Media Player and even more recent players just don't give you. You get artist biographies, album reviews, good quality artwork, even timed lyrics for some songs. It feels like a physical connection, especially when you ditch the keyboard on your large screen and use the free iOS or Android app to control it. On top of that, it will find other albums by the same artist on Tidal, collaborative projects that the artist worked on, even focusing down to composer level. And new in version 1.6, the Radio function that pulls in related tracks based upon your current selection, has been updated to pull related tracks from both your library, but also a supported streaming service. 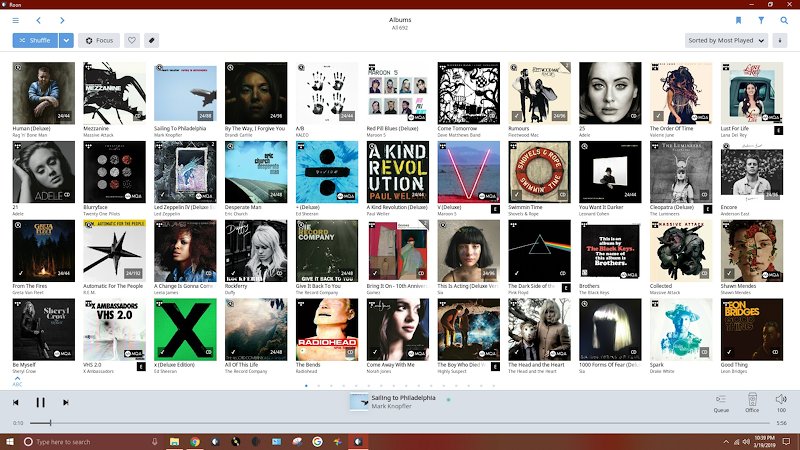 Talking of streaming services, Tidal has been integrated for a while, but now that Qobuz has launched in the US, they are now supported too, including the sublime package, giving High Res streaming capability to the software. Version 1.5 brought compatibility with Tidal's Masters using MQA. MQA, short for Master Quality Authenticated, was developed by Bob Stuart, formerly of Meridian, as a method of folding high bitrate content into a 16/44.1 FLAC container. With a compatible DAC, this can be then “unfolded” to a higher resolution file. Previous versions could pass this file through to compatible equipment, but Roon can now perform the first unfold, gaining a higher resolution and bringing compatibility to DACs like the Audioquest Dragonfly and the Meridian Explorer2 that can then perform the second unfold. But that is not all. Since version 1.3, it has its own built in DSP, with Parametric EQ, volume leveling and upsampling engine. It even talks to the DAC to find out the supported sample rates, making even DSD upsampling possible. Interestingly, if being used with the MQA, it is possible to do the first unfold prior to using DSP, and send that signal to the DAC.

A note on the volume levelling and DSP here. If you have a 64 bit PC, it will upsample to 64 bit, do volume leveling there, then downsample to a bit rate suitable for the DAC. With word length this long, no truncation occurs during the volume leveling of even Hi-Res music or you can tell it that you want bit perfect all the way through to the DAC and the stream will be passed through to the DAC untouched. Although fairly rudimentary and requiring a bit of setting up, you can paste the URL of streaming broadcast stations, even working with Tunein URLs and FLAC stations. Roon is saying that a much improved user experience is in the works, but this is one of the only flaws in the user experience that I have found. 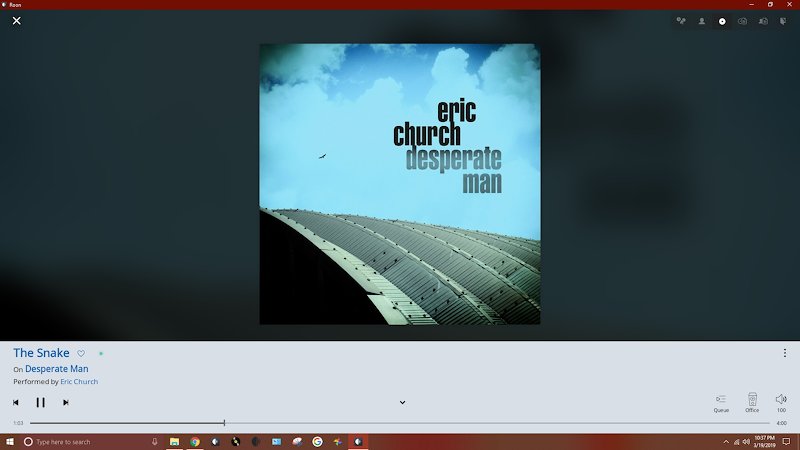 So, we have covered a lot of the user interface stuff, but how does it sound? In short, very good. In my first proper setup with Roon, I was streaming from an ASUS Nettop computer, to a Maverick Audio TubeMagic D2 (with the Sparko opamp upgrade Sparkos Labs SS3602) into a Niles audio D-Class amp, powering some Mordaunt Short MS908i floor standing speakers. It sounded great, with great soundstage and detail, with just the extra little something that the Sparko opamp upgrade gets you with only down side being that the Mordaunt Shorts could be a little boomy in my small listening room. But, you are not getting the true benefit of Roon in a setup like this. Roon developed something called RAAT (Roon Advanced Audio Transport). Think of this as Airplay on steroids, allowing Hi-Res, even DSD, streaming to multiple endpoints around the house. Roon now has multiple partners making endpoints that are Roon certified that can use this protocol. On top of that, Airplay, Squeezebox and even bespoke streaming options for speakers like the KEF LS50W are supported. DLNA though, is not supported, the Roon team have very strong views on it being a poor substitute. You can even stream 24/96 files over a Chromecast Audio, connecting it up with an optical cable to your DAC. That gave a very inexpensive, but very good sounding way to add on streaming to any DAC with a Toslink input. Well, until Google discontinued the Chromecast Audio.

Finally, Roon offers a Roon Bridge, that can added to a Linux distribution. The most popular endpoint at the moment? Probably Raspberry Pi small computer, running on an open source Linux distribution called Ropieee. So where is the benefit? My old ASUS computer used to have a fan constantly running, especially if I was trying upsampling, and this is less than ideal in the listening room. However, get yourself a small computer, say an Intel NUC or an iMac Mini, running Roon server in another room, removes that fan noise from the listening area. Then you connect to an endpoint like Raspberry Pi, or some other partner streamer that doesn't have a fan, connect it up to your DAC and suddenly, not only do you have a great UI, but you start to get great sound without the noisy fan. 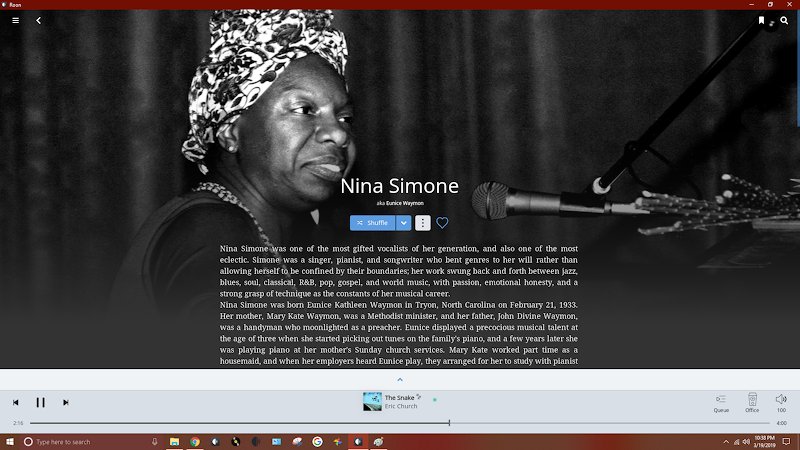 Now, some will point to the Pi as a possibly noisy source, as the Ethernet bus is shared with the USB; however, you can deal with that in a couple of ways. One is to get a SPDIF HAT that attaches to the Pi, allowing you to connect up to 24/196 to your DAC. Or you can do what I did and connect the Pi up via WiFi, add in an iFi iSilencer and you have a top notch endpoint for less than $ 100. Adding a better power supply also brings improvements. So, how does it sound? Well, having gone through some upgrades (forced on me by the untimely death of my Niles amp), a direct comparison is difficult to tell from when I ran my ASUS. But, even comparing the Pi to directly connecting the NUC that I use as my server, the difference is amazing. Playing through my Schitt Modi 3/PS Audio Sprout 100/Dynaudio Excite 14 system, everything is exactly as I want it. The software doesn't colour the music at all, just lets the other components do their job. Some of the Qobuz Hi-Res and the Tidal MQA sounds astonishing, I'm hearing things in tracks I had never heard before. Instrument separation is strong, soundstage is wide and the scale is impressive. The treble is nice, not too bright or overbearing, but you can still hear the decay of cymbals, the mid is smooth, but still drives and is seamlessly integrated and the bass is as good as you are going to get in the confines of our condo with stand mounting speakers.

So, there have to be some negatives and there are. Setting up the Pi does require a little technical know how, but if you use Ropieee, and follow the instructions it is well within the reach of most. Using DietPi or Volumio can work well, but in my experience, they are a bit harder to setup. Other streamers occasionally have issues, but the Roon community is not only responsive, but the support team are actually participating on it and actively working on fixes. For a plug and play experience, the Sonore Microrendu and the Bluesound Node 2i are probably good solutions. The internet radio is not the best - functional is probably the kindest description, but it is on the roadmap to improve and Roon are rolling out major upgrades on at least a yearly basis. The one area that I would really like to see something happen is on the mobile side, hopefully with CarPlay and Android Auto integration. The phone app is not the best, a tablet really improves the experience, but that can be done with the cheaper iPads and Amazon Fire tablets. 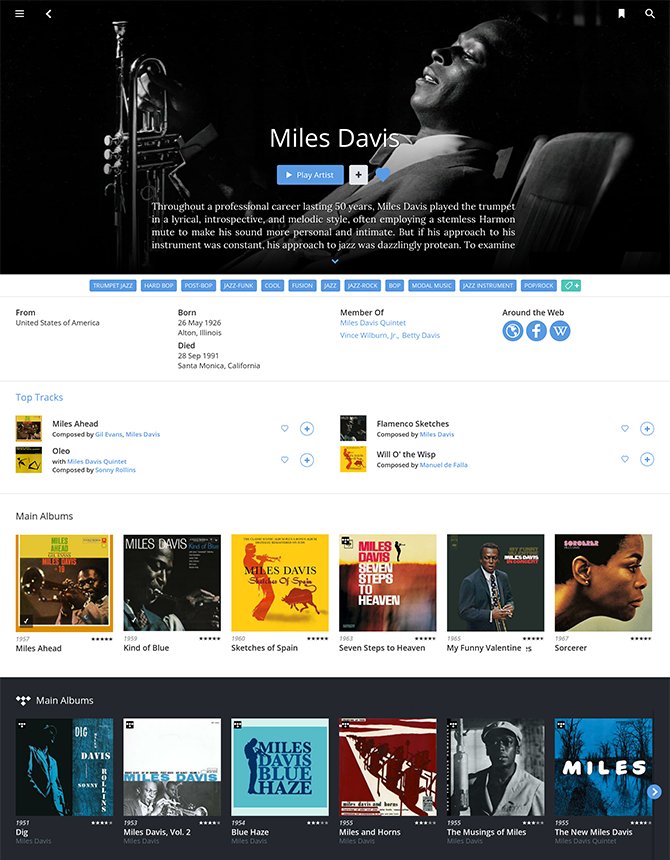 Every little part, the UI, the DSP (which I only use for volume levelling), the ability to stream to different endpoints around the house (including using a Chromecast as a display), the integration with both Tidal and Qobuz, along with your library, all adds up to a great experience, which only gets better with each update. On top of that, it simply gets out of the way of the music, just enriching the experience enough to be a welcome addition, rather than a distraction from the main attraction.