Embedding and extracting information via discs of vinyl

The Scale of the Challenge

How big is that?

It is 70 years ago this month since the vinyl LP was introduced. Despite the rise and fall of the Compact Disc, the momentary flickers of DVD-A and SACD, and the obvious sonic superiority of high speed analogue tape, the 305mm (12 inch) flat circle of vinyl has remained the reference standard for domestic audio for half a century. The Library of Congress continued a preference for vinyl copies of significant archival recordings until recently. Yet when we think carefully about the scale of the challenge to make a permanent record of all audible frequencies at the limits of human dynamic range, the engineering challenge is immense.

One of the best descriptions of the challenge of recording sound as a physical analogue, involved a magnificent analogy.
"Oh no, enough already," insist the Plebs' Chorus, stage left

During the peak years of high-end audio, when any aspirational home featured an audio system in pride of place in the living room, Laura Dearborn's wrote the seminal GOOD SOUND published in 1987 but sadly now out-of-print. In this wise tome, Laura contrives to explain what is being achieved by the cutting lathe and playback turntable, arm, cartridge generator and stylus of the analogue vinyl reproduction chain.

In the 1960's, the capacity of a stylus to track the modulations of a stereo groove whizzing past it, was likened to a Ford Model T trying to navigate fast through a narrow rocky gully. Instead of this dramatic image, conjouring memories of Laurel & Hardy silent films, Laura Dearborn (whose name also resonates with the Ford analogy) turned her attention to a sense of human scale that we can, at first readily imagine.

"High school maths alert," warn the Plebs' Chorus, stage left.
Thinking graphically, with the groove appearing as a V shape in front of our eyes, the x axis is lateral groove information and music will be described in terms of change in the X axis position. Because the vectors of the groove walls may be resolved as X and Y axes, the Y axis wiggles describe the position in space between the loudspeakers and the Z axis is the tangent to the rotational movement of the disc. The Z axis is therefore where all the energy comes from and is equally accurately (or inaccurately) described as the time axis.

Back to the Dearborn analogy

The highest frequencies cut into the vinyl groove sides are of comparative size to a wavelength of light. Hence that stylus, visible to the naked eye, has the task of following physical structures as small as the light wavelengths we are looking with. Laura Dearborn was writing for an audience primarily resident in the USA, so Imperial length units will be used.

Those tiny high frequencies are therefore measured in millionths of an inch. To follow these undulations, the stylus will often pull several G (as though on a planet with higher gravity, like the forces on an air force pilot) at high velocity, while maintaining accurate contact with those groove walls. The stylus must not lose contact with either groove wall nor blurr the little wiggles. The friction between diamond and vinyl generates temperatures of 450K (or 350°F or 175°C). The groove vinyl liquefies each time the stylus passes over it, which is why replaying a section repeatedly causes more damage than a full play through.

Although the tracking force is typically set between 1 and 2 grammes, the tiny contact patch of stylus tip to vinyl creates pressures of many tonnes per M2, or even tons per square inch. It is surely a wonder than anything like the original output of a microphone survives this encoding and decoding process to emerge as a recognisable sound from a loudspeaker. These extreme conditions of forces, heat, speed, and need for nimble manoeuvrability, are then subjected to environmental vibrations that interfere with the stylus as it retrieves the music from the groove. It really is extraordinary that any music (as opposed to noise) is heard through an audio system.

Imagine every micron as an inch
"Oh No!"shriek incredulous Plebs, stage left,"Now the Old Scribe is mixing SI with Imperial units"
Dimensions as minute as an LP record groove are typically measured in microns. In the USA, 1 micron equates to 0.0039 inch, and Americans like to think in inches. Laura Dearborn leads us through the outcome if you imagione the micron as an inch.

On this basis, of those tiny groove modulations being measured in inches instead of microns, the stylus alone measures over 30 feet (1 foot = 12 inches) tall.

This 30 foot stylus is carried by a cartridge cantilever 50 feet thick and 275 feet long.

The 275 feet long cantilever emerges from a cartridge body 2,000 feet long, hovering 80 feet above the vinyl record surface. Like a medium sized office block way above your head.

The pickup arm (equivalent to a 9 inch model) is about 4 miles long and 450 feet in tube diameter. It would weigh many tonnes, but leverage means that mass nearer the cartridge body will be more difficult to accelerate than that located near the pivot.

Think about that for a few moments. Let it all sink in. As the groove drags past that 30 foot stylus, its surface is deformed by up to 20 times the size of the recorded audible harmonics of a violin. Mid-range frequency information measures about 16 inches, while a bass note might be expressed at a 10 foot wave, if just 10dB louder than that midrange note. Even a solo instrument, playing single notes, will contain many harmonics, i.e. different frequencies.

The groove wall deformation on this scale is about 4 inches wide, from a typical elliptical stylus. Dust looks like immense chunks of rough rock. Wherever a signal is not mono, the two groove walls will features different hills and dales from each other. As the sharp angled cutter stylus modulates from side to side, inevitably the groove narrows and widens with respect to the radius of the disc from the centre hole. The stylus has to follow these changes accurately. 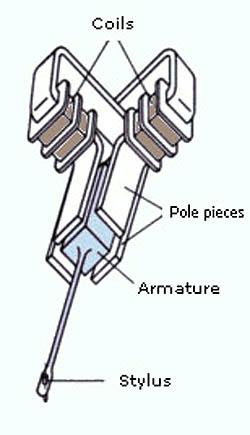 The picture at the top shows an old Ronette test disc from the earliest days of stereo, featuring a 1kHz tone cut on one channel and a 12kHz tone cut on the other channel. When the Dearborn-Boston analogy is applied to this image, the immense challenge of vinyl reproduction begins to become apparent. Consider the image above is the mechanical system of the simplest moving magnet (MM) cartridge employed to achieve this feat.

It is a triumph of ambition that there is still progress being made in vinyl LP production.