Welcome back to the real world

NB. The manufacturer has expressed the wish that anyone reading this review should read all of it, not just the first two paragraphs - as if you would...

Recently I've done three cartridge reviews on TNT. The first two being the Shure V15 and Dynavector DV-20L at around 300 pounds and the Dynavector XV-1 at well over 1000 now I've decided to come down to earth a little and have a look at what is available at the more affordable end of the market. I think it's fair to say that "real hi-fi" cartridges start at around the 50 pounds mark so here we have Shure's M94E at just above that. 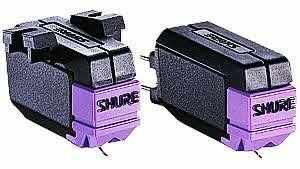 Shure's excellent website has quite a lot of information on it but for the record the M94E is a moving magnet cartridge with a 4.0 mV output.
The cartridge is also available in P-mount (see photo) for those unfortunate enough to need one In every other respect the cartridge is pretty much standard MM stuff and so should be widely compatible and of course stylus replacements are available just about anywhere.
Having a V15 to hand made an interesting comparison as to exactly where the savings had been made to get the M94E to a much lower price. The mounting plate is plastic rather than alloy, the stylus is elliptical rather than line-contact and the cantilever tube aluminium rather than Beryllium.
The other major difference being that the M94E lacks the "dynamic stabiliser" of the V15, though as it seems slightly less compliant it is less likely to need one. Also whereas the V15 is quite likely to find it's way onto heavier 'reference' tonearms, the M94E will more likely be used on cheaper and generally lower mass arms, again lessening the need for any damping of arm/cartridge resonance.
Otherwise the metal generator can looks similar and the replacable stylus assembly is a rather bilious purple - very "nightclub special".

Normally now is the time for me to bitch about threaded inserts for mounting the cartridge, but here it would be churlish given the price and of course the fact that the removable stylus assembly makes accidents whilst fitting less likely.
So duly installed I set tracking at the recommended 1.25 grams, put the VTA slightly tail down as most cartridges prefer, and left the thing in a locked groove overnight. A quick run of my test record showed an arm cartridge resonance around 10 Hz on my SME IV so I added a touch of damping. Tracking was good without being spectacular (watch this space for a new champ soon), though once again no music signal seemed to give any problems
Next evening I put the first disc on to see what the M94E could do. Well having just come from a cartridge costing over 20 times as much (the XV-1) and in comparison to Shure's own V15 flagship the result was as one would expect - depressing. Why depressing? Because every reviewer's dream is to find a component that costs peanuts but outperforms exotics. I know it's a totally unfair and unlikely proposition but I can't help it

Here I'm not going to compare it with the XV-1, it would be silly, but a comparison with the V15 is more relevant.
Both share a similar balance. That is they have a warm, classically analogue reproduction. The difference is that where the seismic bass of the V15 sounds fast and snappy, in the M94 it sounds muddy. The V15 also had an openness and 'air' to rival good moving coils and a sparkling top end. The M94E just doesn't have that magic that makes music exciting. Leading edges are blurred, soundstaging limited and detail retrieval significantly less. Madonna's "he's" from 'Till Death Do Us Part' was swallowed whole, and various electronic noises from the opening of 'Dire Straits' 'MTV' went AWOL.
In its favour it never sounds strained or pushy, always smooth and laidback, not something every MM can claim.

So it's rubbish? No! Emphatically not - and here's why. All the above is in the context of an 8 grand system fronted by a 3 1/2 grand TT/Arm combo. This is frighteningly revealing, needs a revealing cartridge. If you put a soft, warm "budget" cartridge on it it's going to show up its inevitable limitations cruelly. The miracle is that the V15 costs 300 pounds and manages to sit happily on such a combination.
Some other cartridges at the M94E's price go the other way. The Goldring 1042 is an example. It is more neutral and overtly detailed, but put on the Orbe/SME it sounds strained, artificial and "clanky".
What I'm saying is that sub 100 pound cartridges have no place on a top front end, any more than a 4000 pound speaker is going to be anything other than deeply unhappy being driven by a 75 pound transistor amp - it's simply unrealistic.

So having laid that to rest, and feeling a little ashamed at giving such a cheap cartridge a hammering I trotted off to a friends house who's system is much more in keeping with the M94E's price. His front end is a Rega 2 clone using the Rega RB250 arm.
Here the little Shure dropped straight into place. That warm balance countering the slightly harsh "budget" turntable and amp to produce a very listenable result.
Suddenly it sounded fresh and lively, boogying along to the music with scarcely a care in the world. Substituting the V15 gave a little more detail but little else, all that extra ability (and cost) was largely wasted. As the turntable was incapable of producing a big expansive soundstage, fast dramatic basslines or microscopic detail regardless of cartridge, these extra attributes of the V15 were lost. The change in character rather took me by surprise, it didn't make the TT sound hi-end, just made its job easier, sort of "hey! stop trying so hard, take it easy"
The Goldring on the other hand rather grated, it just wasn't so easy to live with, and on this front end at least came second to the M94E.
One pleasant side effect was the way the Shure handled surface noise. Budget turntables are never going to produce the near silent surface of a top outfit, but here the M94E flattered its companion to make the crackles far less obtrusive.

Shure have been very clever with the M94E. They have produced a cartridge ideally voiced for the sort of budget ancillaries it should properly be used with. They have resisted the temptation to 'reach for the high-end', something which so often falls flat. It is not a 'high-end' bargain, that accolade must go to the V15 amongst a very few others, but at the price Shure have made intelligent and appropriate compromises. If you own a budget TT, from Rega 3 down, then the M94E could be just what you are looking for to produce a decent, balanced sound.
If on the other hand you have a top end turntable and arm then no sub 100 pounds cartridge is going to do anything but hamstring your turntable. At what price does this payoff come into play? I'm not sure. Repeating the experiment on a Michell Gyro/RB250 clearly showed the V15 as the better cartridge.
I'd bet next months wages that the Gyro/250/V15 would be well ahead of a Gyro/RB300/M94E and possibly even a Gyro/SME309/M94E, so given a certain competence in the arm/TT the quality of the cartridge becomes a major limiting factor. Over the coming 12 months I hope to have a look at several mid price turntables and when I know the answer for sure I'll let you all know.

"Finally, once again, thank you for the great review. Your coverage is thorough and accurate - a breath of fresh air for a manufacturer!"
Michelle Kohler - Shure