A DVD Player that makes Music

The question I have been considering for the last few months is: has the time come to invest in a DVD player that can also play music as well as satisfying the family's desire for the latest in home movie viewing?

I have resisted for well over a year as it appeared from the press that one would have to splash out around 2000 euros for a player that could perform well with CDs. I have now taken the plunge and purchased the latest mid-priced player from Sony, the DVP-NS900V, hooked up to a widescreen 100 Hz TV (sorry Lucio I will say no more about the movie set up - but it is very impressive) and of course my Naim/IPL Hi-Fi.

Although not a major consideration for me, the player looks every penny of its 800 Euro price tag with a sturdy front panel, pleasant display, clean ergonomics and buttons that click nicely to the touch. Compared with the Arcam the plastic tray feels rather insubstantial and the Sony player doesn't have the weight of the older black box. It does however come with large feet that appear to have some form of vibration isolation build into them. The remote is comprehensive and pleasant to use.
However, to access many of the facilities one needs to be able to view the on-screen menus but as most of the user programmable functions relate to video output this is not a major issue for audio listening. Indeed two key audio options are available on the player front panel as well as the remote; turning off the video circuitry and switching off the display.
Interestingly, the player is billed as a SACD/DVD player compatible with DVD-Video, DVD-RW, Video CD, CD and SACD but not DVD-A. The star billing of SACD points to its audio aspirations. Note though that if you purchase this machine and DVD-A takes off rather than SACD then the strategy of a one-plays-all player will not come to fruition.

So how does it sound. Having no SACDs at present my listening has been restricted to ordinary CDs and I will need to get hold of a selection of SACD before a robust assessment of this format is possible. Before any serious auditioning, the player had been used for well over 24 hrs in CD mode and many more hours of DVD replay had been enjoyed. My first experiment was the use of the Statmat and I can confirm that the sound was improved by this device. 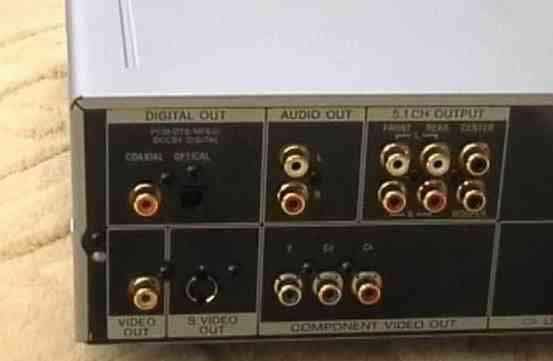 First impressions were highly satisfying. The first few bars of Tears for Fears "Woman in Chains" established that this was a player that could play music. The bass was low if a little lean but this may be viewed as a positive feature.
Some CD players can sound a little too thick in the upper bass which can give a "warm" sound but can also muffle the musical presentation. The Sony portrays vocals as real voices treating sibilance with respect.
The high frequency domain can sound a little forward even a tad harsh with the volume set very loud (shouting to be heard levels). Overall there is a sense of delicacy and a good balance across the frequency range. The highs and lows on Sheryl Crow's "Tuesday Night Club" were reproduced well with buzzing bass lines, smashing cymbals and the changes in pace faithfully portrayed.
Imaging across the sound stage is also very good with instruments being well separated and their independent contributions being easily identified. Overall the sound tended to fill the room rather than create an image behind the speakers with vocals especially being projected in front of the loudspeakers.
Detail retrieval is very good as demonstrated by listening to the recorded radio travel bulletins at the start of Chris Rea's "The Road to Hell". There is a choice of digital filters: SHARP or the narrower bandwidth option of SLOW. I tended to prefer the SHARP setting although the SLOW setting does provide a warmer sound. What really surprised me about this player was its foot-tapping quality. Whilst not in the same league as the LP12 (but then this is one area where the LP12 excels) it is a player that times.

So for a reasonable investment I have not only acquired a first rate source for home cinema but also an audio source providing highly enjoyable music from CDs and perhaps even greater delights from the SACD format. How does it compare with the Arcam/Kinshaw? The Sony is cleaner more analytical in its presentation; the bass is leaner and tighter. The Arcam/Kinshaw has a fuller sound with a slightly better attempt at a 3D sound stage.
Levels of detail are similar from both players. Where the Sony boogies, the Arcam/Kinshaw soothes and relaxes.

There is a coax and an optical digital output (not implemented for SACD). Connecting the Sony to the Kinshaw DAC produced a sound with a fuller tonal balance indicating that despite the apparent sturdier build of the clocked older player the Sony extracted at least as much information. Alternatively it shows just how good the Arcam transport is and why it was held in such high regard ten years ago when it appeared on the market.

So yes I have found a one box solution that meets my digital needs. Sony have produced a player that should be high on anyone's list looking to buy a DVD player. If you like a warm "organic" sound then the Sony is probably not going to be your first choice as a CD spinner but if you prefer an exciting fast presentation and you are looking for a DVD player then listen to it because it might just free up your existing CD player.
Incidentally, I found the NS900V player on the web advertised at a 20% discount over high street prices. And at around 650 euros this player is even more impressive.