As far as I know, only two hi-fi components owe much of their sales figures outside of their intended home markets to the internet. The first is the Lehmann Black Cude, which originally got reviewed by Steven Rochlin at Soundstage, and by our own Lucio here.
Sure, later on followed written-press reports by Stereophile and Hi-Fi World, but it was the 'net that pulled it out of its relative obscurity and put it in the limelights on a world-wide stage. As a result, browsing around one now can even be forgiven for thinking that the Black Cube is the only phonostage around! It is, for sure, the only phonostage with its own website :-)

But this isn't about phonographics. No, this is about CD-players. Enter the Tjoeb. A cheap Marantz CD-38 modified by a collective of Dutch hi-fi dealers centered around high-end distributor Durob, and probably just intended to sell in small numbers in the Netherlands and Belgium. Until a bunch of rather satisfied customers started bombing Audio Review with exstatic reviews and comments, making one belief that the Tjoeb is better than ####### (fill in your favourite addictive or passtime).

The rest is history. People started inquiring, Durob complied by making the Tjoeb available on-line so that sales could extend from Nova Scotia to Capetown, and now even the printed mags refer to it with phrases not unlike "smells like CAL Tempest SE".
(Maybe it was all part of a master plan. After all, Herman 'Durob' Vandendungen also was behind the Kiseki brand of high-end MC cartridges...)

Still, a formal review so far has not seen the light.

Which, incidentally, does not have its own website, but it does come in a box plastered with stickers bearing Durob/Ah!'s URL.

As it itself says, the Tjoeb is a tube CD-player. One of only a few: allow me to digress.
Ever since the birth of digital consumer audio has mankind been trying to smooth out quantization nasties by sending the signal through tubes. CD was launched, and a small German company, Reussenzehn, came with an add-on triode buffer (exactly like the Musical Fidelity X-10D, but in 1983!!!).
CAL had their legendary Tempest valved two-box player. Audio Note went further, combining tubes with another antiquity, the coupling transformer, in their DACs. At the lower end of the market not much happened, until aforementioned MF begot the X-10D buffer stage, and now of course there is the Tjoeb, offering a one-box solution for those who want to put their digits through evacuated glassware. 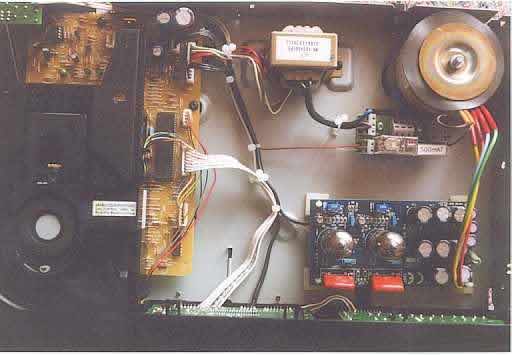 Durob's website tells the whole story, but in short it goes like this: Take a cheap entry-level CD-player, in this case the Marantz CD-38 (Lucio reviewed it none too favourably back in the beginning of this year). Substitute better-sounding relays for the output muting transistors (hmm, a classic Dutch CD tweak if ever there was one).
Take out the cheap op-amp that does current-to-voltage conversion after the DAC and low-pass filtering. Put in a better op-amp (OPA-2604), add a twin-triode 6922-based tube output stage with its own power supply (50VA toroidal transformer), and relegate part of the low-pass filtering to said vacuum state section.

Of course, having handed over your pecunia, you basically still only get an entry-level CDP. Luckily the CD-38 is well put-together, and it doesn't look half-bad in its understated black livery. In fact I thought it looked much nicer than my own iconoclast Rega.

It does make, however, a bit of transport noise, which may or may not be a problem. And my wife even commented on the intrusive "click" of the relays between tracks. But then, when listening we are much closer to the rack with components than to the speakers.

Speaking about noises: the Tjoeb's output voltage was a damn loud 3.5V, where 2V is the norm. With my amplification this meant that only the lowest 10% of the volume control's range could be used.
Owners of passive preamps will love this, but all others are left wondering about the why of this blast. (Hell, I'd rather see all digital sources at a much kinder 500mV or so, or, alternatively, the total gain of the downstream amplification should be reduced!) 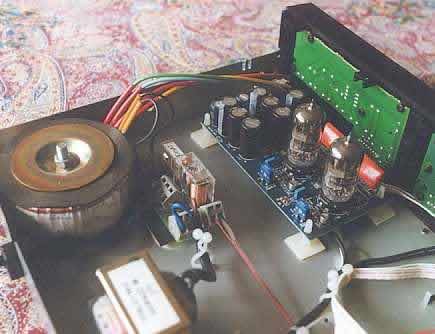 The TUT (Tjoeb-Under-Test) was a well-used demo model, but I nevertheless left it continuously on repeat for 24 hours before commencing the listening sessions.

I started with Mary Black's The Collection: mostly sparse acoustic settings centered around a voice to die for. Let's start with the good things.
Compared to my Rega Planet, the highest treble is perhaps a bit cleaner, and the overall sound is a bit fuller. But it also is a tad vague, less precise, and most certainly with less image depth (and we are talking CD-depth here, not the stuff available from LP!!!!).
Tonally the Tjoeb sounds fairly smooth, is almost grainless, but against this stands the Rega, which simply is grainless. Moreover, the Rega succeeds in sounding natural, while the AH! player still sounds too much electronic. With this departure from naturalness I mean a residual colouration of the signal, a certain roughness pervading the whole spectrum from bass to treble, which makes the listener always conscious of the fact that the sounds are reproduced by a machine, rather than being plausibly real sounds. Most cheap CD-players behave awfully in this department, and the Tjoeb is indeed one of the better ones, but still ...

Moving over to Yo-yo Ma's Inspired by Bach solo cello pieces, it became clear that the Tjoeb adores strings, making them sound fuller than life, which isn't necessarilly true to the recording, but which is something I like nevertheless. In some situations.

On rock music it sounds enthusiastic, perhaps a bit too buzy while the Rega is more reticent, if more precise. At one instant the Planet told me I was listening to metal strings, while according to the Tjoeb's version these were just strings. And although sounding bigger and more alive than the Rega, the Tjoeb strangely evoked less engagement: a certain sense of anticipation during listening was missing.

It is funny how this valve CDP handles loud and complex passages in the music: Be it a Monteverdi choir trying to reach the roof of a cathedral, or the Walkabouts' electric guitars in full battle with a string section, the Tjoeb sounds laaarge. Larger than the Rega.
But it also muddles, loses detail and the specificity of individual sounds, turning everything more or less into a homogenized mass as the volume level soars. This always in a very controlled and gradual manner, mind you, so that not too much attention is drawn to this phenomenon.

If all of the above seems a little bit confusing, or confused, then you are right. I don't feel the Tjoeb is the panacea the glowing reviews of happy owners I referred to would let you believe. I think it is much closer to the truth to say that the AH! is easy to listen to (given the low cost), paints a big and bold picture of the musical events, although somewhat losing detail, character and neutrality while doing so. In absolute terms it is not bad, it is not good, and it is not average. It is, and maybe you'll like it, maybe you won't.

As e500 CD-players go, the Tjoeb is pretty good. Or make it just "good", if you want. It betters, for instance, Marantz' own highlights from a few years ago, notably the CD-63SE and CD-67SE, which altogether sound still more electronical, still too much hi-fi.
When it comes to refinement and neutrality, though, I am afraid that the Tjoeb falls rather obviously short of the standard set by the slightly more expensive Rega Planet (e700 these days), which means that, while fairly good overall, this be-tubed CD-player is not quite humankind's salvation in digital times.