If you have more than a passing interest in hi-fi, you will probably be aware that using a PC as a source component is becoming increasingly popular! It started with 'better' sound cards for PCs, some of which are physically located outside of the PC case, and therefore further away from that electrically noisy environment. Add a good quality DAC to one of these sound cards and you can achieve some very acceptable results. Then we have the music servers, that stream music stored on the PC's hard drive. Usually offering remote control, and some sort of display, these devices bring a convenience to hi-fi that makes turning over a vinyl record half way through an album, and positioning the stylus in the first groove, seem even more 'rustic' by comparison. These exotic sound cards,and audio servers actually offer reasonable performance for their outlay, but what if you want to try PC audio for yourself, without such a large investment? Well now you can, thanks to Trends Audio who offer us their Audio Converter, a combination of an out-board sound card, and DAC, all in one tiny little case. 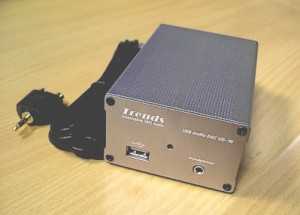 All pictures courtesy of Trends Audio


Selling for just 90 USD, you could be forgiven for thinking that this is just the latest gimmick to emerge from some far-eastern factory, and is not to be taken seriously. But a look at the specification of the UD-10 makes me wonder how they do it for the price! The casing is well made from aluminium, with a good range of connectors. Would you believe; there are no less than four digital connectors (optical x1, coaxial x2 (RCA and BNC), AES/EBU x1) should you wish to use your own DAC with the UD-10 instead of the built in DAC! Inside we find Sanyo Oscon, and Elna Silmic capacitors, and a Burr Brown PCM2704 DAC chip. There is no doubting that the UD-10 has been built with sound quality in mind, rather than being designed to sell at a huge profit! If I'm very picky, I would like to have seen a couple of phono sockets for line out although the supplied adaptor (that plugs into the headphone jack) works well enough.


It's not just the quality of components used in the UD-10. One look at the features page on the Trends Audio web site should convince you that a lot of thought and care has gone into the design of this audio converter. Dual power regulation so that the analogue and digital supplies are kept isolated is the sort of feature usually reserved for high-end DACs. You can even connect more than one DAC to the outputs of the UD-10 at the same time and it will drive them all. Ideal if you want to compare one against another! 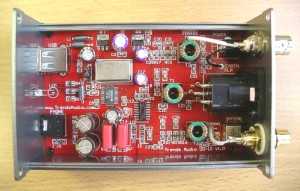 I was wondering how all this could be done for the price when the review sample arrived here. The item was well packed and on opening the box, I found the UD-10, a USB lead to connect it to the PC, a jack to twin phono converter, and amazingly, given the price of this item, a battery pack containing four AA rechargeable batteries and a charger!

I decided to start with the UD-10 in my second system, and connected it up to my spare PC. Initially I connected the UD-10 to the input of my valve pre-amp that fed the modified Autocostruire 2020 class-T amplifier and my modified IPL A2 loudspeakers. The USB lead supplied is 1.5 metres long but even with the PC set up on the floor next to the hi-fi rack, I needed a longish interconnect to connect it to the pre-amp. To get me going, I had ripped a few CDs to the hard drive using Exact Audio Copy, my preferred ripping software. And so, with the pre-amp warmed up, I pressed the 'play button' in Feurio and sat back to listen.

Trends Audio had recommended that I use the 5 volt battery pack supplied rather than rely on the 5 volts supplied via the USB connection. I actually tried it with both supplies and the battery pack supply does sound better! When the batteries need recharging, there is no need to remove them from the pack, it simply connects to the supplied charger and that's it!

The first thing that I noted was the huge sound stage and the 'open' sound. I also noticed the increase in detail over my CDP (modified Philips CD723). In fact this sound was good enough to root me to my listening seat for a good while! However, as I listened longer, I noticed a slight softening of the bass and a sort of 'haze' over the vocals. Then I remembered that the only interconnect that I had to hand when I connected up the UD-10 was one of those cheap and cheerful things that they give when you buy a piece of hi-fi. I popped into my work room and built another 'Shoestring', but longer than usual, and using larger diameter conductors (enamelled wire). Having replaced the cheapy IC, the improvement was immediately obvious with the haze gone and the bass tightened up nicely. In fact bass is much improved with the UD-10! 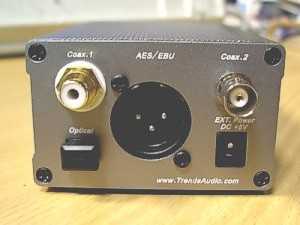 I then wondered how the UD-10 would sound if connected directly to the Amplifier and as I was able to control the volume level from the PC, I bypassed the valve pre-amp. Quite honestly, given the combined cost of the UD-10 and the Autocostruire amplifier, the sound was simply amazing! If you are looking for a second audio system, or perhaps something for a bedroom, and if you have a PC there already, then this combination will surely provide the best sound-per-pound! But things get better...

Having been completely new to PC audio when I started off looking at the UD-10, I was unaware that playing music back via the Windows operating system is far from ideal. It's all to do with something called kmixer, or rather the need to avoid it! A little research revealed that ASIO drivers will allow us to play back music from a PC avoiding kmixer. I downloaded and installed something called ASIO4ALL that was fairly easy to install. I also needed to move to Winamp for playing back the music as this has a plug-in that allows the use of the ASIO drivers.

Please note: I couldn't get the latest version of the ASIO4ALL drivers to work with Winamp so I installed version 1.8 and that works fine. Also, I am told that the new Windows Operating system, Vista, will be optimised for sound playback and will not have the 'kmixer' problems.

With ASIO installed, and the Windows sound system disabled, there is no control of the sound level output (via the PC) so I installed a passive volume control between the UD-10 and amplifier. But even with the volume control added, there was an obvious improvement to the sound quality using the ASIO drivers. It was as if another one of those infamous 'veils' had been lifted!

Further experimentation involved adding the Burson Buffer after the UD-10. This made a small improvement but I'm not sure if I would consider the extra cost justified in this case!

Sufficiently impressed by the UD-10 in my second system, I brought it, and the server PC downstairs and ripped some more CDs to the hard drive. Then I connected the UD-10 to the main system in place of the CD723. So it was playing through the Burson buffer, an active pre amp into a pair of OPA541 chip amps powering the Hawthorne Audio open baffle speakers.

The UD-10 was no less impressive in the main system! Increased detail and a wider, more 'open' sound stage being the two most noticeable characteristics. It's not all positive though. Possibly because there is more detail, I liked some albums more than others. The UD-10 is revealing enough to show up poor quality recordings quite ruthlessly. I also felt a little like I did when I first got a CD player after listening to vinyl for so long. I can't describe it really and it is probably no more than needing to get used to a new format. Over all though, I felt the plusses of the UD-10 out-weighed any negatives.

Next I moved the PC well away from the hi-fi and connected the UD-10 to a Scott Nixon DacKit via a 10 metre coaxial cable. I actually preferred that arrangement and the very long cable did nothing to detract from the performance. I don't understand the reasons, but there is a theory that a longer (4 metres plus) cable between a source/transport and DAC, is better than a shorter one. Certainly a 10 metre cable gives plenty of options for siting the PC with its fan noise!

I had no expectations of the UD-10 when it was offered for review. What could a 90 USD item possibly add to a good hi fi system? But I have been very pleasantly surprised by what this tiny box is capable of. Not only that, it has got me interested in PC based audio when I previously had no intentions of moving away from my CDP. While ripping my CDs to the PC, I noticed how many had small scratches, despite me being ultra careful when I handle them. This, and the thought that CDs can deteriorate over time, is another good reason to consider moving a music collection to a hard drive. If I settle on using a USB DAC, I will certainly invest in a PDA and use that to remote control something like Winamp to select the music I want to listen to. You can a buy a piece of software (called RemoteAmp to use on a PDA to control Winamp, allowing you to select your music from a list without getting out of your chair (but make sure that you get a PDA with Bluetooth connectivity)!

The UD-10 isn't the only USB DAC on the block. Alternatives can be had for even less money, and you can pay more than twenty times the price of the UD-10. I would be interested to compare the UD-10 with any of the competition but I suspect that it would do very well against most of them.

It's hard not to compare the UD-10 with the original SI T-AMP! They both offer a performance far in excess of their cost. I suspect just as the T-AMP got people interested in class-T amplification, the UD-10 will do the same for PC based audio. However, having heard them both, I would suggest that owners of the UD-10 would not be quite so quick to seek out an upgrade. As such, I heartily recommend the UD-10 as not only a bit of a bargain, but an ideal way to try out PC based audio. If you have a PC, you don't need to spend any more than the cost of the UD-10. You can get a good idea of its capabilities even without installing the ASIO drivers although I suggest that you try them sooner rather than later. Be warned though, once you have heard the UD-10, you may not be content to go back to your CDP! Even if you are, the UD-10 can be put to good use in a second system! Oh! And did I mention that you can also use headphones with this little gem? Yes, I'm highly impressed!