I'm sure you're familiar with re-badged CD players. Yes, those commercial, Japanese-made units with new bits here and there, sold as they were totally new and original units. There are sooo many examples in the market. Sometimes manufacturers change the cabinet and the faceplate, add a big toroidal transformer and a new output stage (perhaps a couple of vacuum tubes, too) and claim to have designed the unit from scratch. Bad attitude!
AM Audio, the Italian HiFi brand famous for their hi-end Pure Class A amplifiers, use a completely different approach. They've decided to modify standard Teac CD players (the VRDS 9 and the VRDS 25X) by substituting the analogue output stage. You may expect an AM-Audio badge somewhere on the cabinet...but, surprise surprise, you will find none. Yes! You can tell it is a modified unit just by looking at the rear panel where a multipolar female connector (for an outboard PSU) has been added. That's it. This is the ONLY visible difference.
No claims, no badges, no additional casework, facelift or makeup....just pure 100% understatement!!!
Additionally, the totally new output stage can be retrofitted to ANY VRDS 9 or 25 CD player (also works with Teac P-70 DACs). Just send your unit to AM Audio and they'll install the new boards inside.

This comparison test will try to shed some light on the sonic differences between the standard Teac unit and the AM-Audio modded one.
If you're not familiar with the VRDS-9 CD player, here are some infos. The VRDS-9 is a half-size CD player by Teac, equipped with the famous CMK-4.2 VRDS transport, 4 20 bit DACs and a sturdy, heavy chassis (9 kgs!) with a thick gold-plated aluminium faceplate. Coaxial and optical outs are available, plus gold plated analogue outs, a complete remote control with digital volume adjustment and even a display on/off feature.
Here are some claimed tech specs: 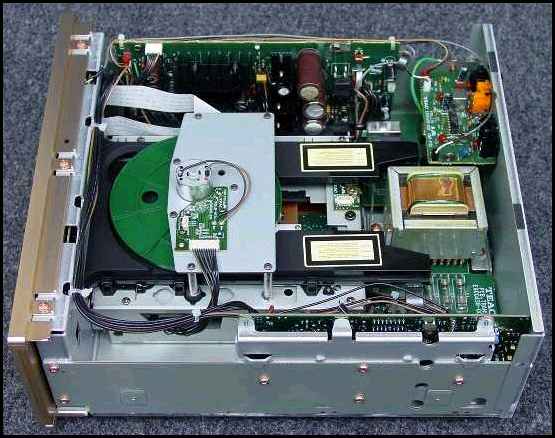 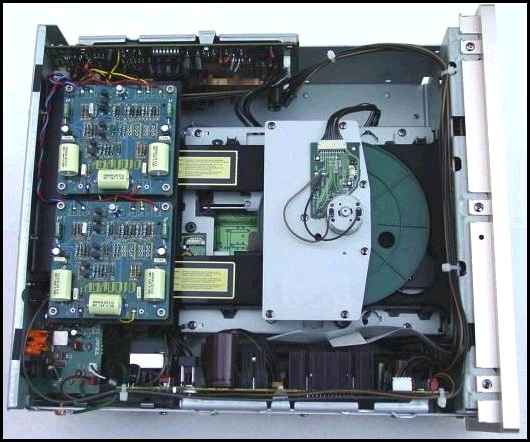 Teac VRDS-9 by AM-Audio - inside view

Here's what AM Audio does to the VRDS-9 CD player.
After the conversion the signal is sent to an inverter/adder, made of a differential amp, a current mirror and an extremely simple output stage with no input-output feedback of sort.
This way, the two inputs of the differential amp, made up of an U406 dual fet, are free and identical with respect to the two phases of the input signal, loaded only by a given resistance value (all other components are disconnected). In this way you can achieve a common mode rejection ratio (CMRR) of more than 90dB in a very natural way.

The dual fet is loaded on each of the branches by a common base bipolar transistor with input on the emitter, so that this configures a cascode with polarity inverted with respect to the dual fet, with a low output voltage with no signal, while the current mirror inverts one of the two signal phases and adds it up to the other, thus re-obtaining the complete signal.
A current gain stage follows. This is a push-pull of bipolar transistors, polarized in order to work always in Class A even with very low loads.
After the modification, the output impedence is only 47ohm, while originally was more than 1K. Moreover, the amplification stages go down from two to one, and this without any feedback.
There are two different power supplies for this tweaking, the simpler gets the power supply from the CD player (as the one tested), the other from the outside with the higher quality power supply unit AM-Audio PW-2.

The standard Teac VRDS-9 offers an unoffensive sound, a bit boomy in the bass and soft in the highs, with lack of detail in the midrange portion of the audio spectrum. Mechanically excellent, this machine fails to sound convincing and consistent. It delivers a sound which is easy to live with, but lacks excitement and sparkle in the long run.
Tonal accuracy isn't its forte and the tricky test of a real piano shows this without any reasonable doubt: notes appear coming from a restricted area in the space between the loudspeakers and, furthermore, it becomes hard to tell whether it is an electric piano or an acoustic one. Not good.
While the lower end of the keyboard sounds a bit on the lean side, the right end side lacks the sparkle and the full harmonic content of a real piano.
With voices things sound a bit better, though one can distinctly hear a slight trace of "dirt" in the upper registers, that kind of distortion that makes cheap CD players so unbearable. I'm not telling this VRDS-9 sounds like entry-level CD players....it is still miles ahead of these! Only, one would expect more class and refinement from a 1,000 $/Euro digital machine.

In the macro-dynamics department the Japanese player performs quite well. The performance appears adequate to its price range though from time to time the VRDS-9 sounds a bit slow and not exactly pacey. With energy-demanding pop and rock tracks I've found it quite boring in the long run. Light jazz and classical Music appear to be its all-time favourites.
Being not extremely accurate and fast, you can imagine its performance in the micro-dynamics department. It simply fails to get the job done, forgets details here and there, and suffers from a lack of harmonic content.

The imaging ability is mediocre. A smallish and blurred soundstage is all you get from this machine. The virtual image slightly extends behind the loudspeakers but fails to exceed the left-to-right distance between them. The scene remains exactly between the loudspeakers, lacking detail, focus and light.

Reading the notes above I hope I've stated clear I didn't like this machine much. It fails to get the fundamentals done right, lacks vitality and sparkle, sounds unoffensive and quite boring. Of course, these comments are referred to its price tag. At 1,000 Euro/USD I expect more from a digital player, these days.

You can imagine how curious I was to test the modified unit by AM-Audio. I've always been a strong believer that a big role in the overall sonic performance of any CD player is played by the analogue output stages. Put crappy opamps and cheap caps and you'll be able to destroy the sound of an otherwise excellent machine.
As said, AM Audio has completely substituted the analogue stages with new proprietary ones, sporting the best components available in the market and a no-compomise circuit. The output stages can be feed by means of an external power supply unit (not supplied) which should improve the overall performance a bit further. I've tested the machine with the output stages fed by the standard Teac inboard PSU.

The first thing one notices when comparing the two machines is the quite different output level. The modded unit sounds way louder, so one has to adjust the volume accordingly. The designers claim to have raised the output level only by a mere 6%...it sounds much more to me. Perhaps the greatly reduced output impedance plays a role here.
Then comes the sound: it is hard to tell it is still the same machine, considering how different are the tonal balance, the dynamics and the virtual soundstage. First thing first.
The modded unit sounds "big", with fat, punchy bass and crystal clear treble. Where the stock unit sounded relaxed, smooth and lean, the modded one sounds aggressive, lively and punchy. A bit turbocharged, if I may.
The sounds is, from time to time, a bit in yer face and tends to shake the listener instead of caressing him. Gone is the laid-back attitude of the donor machine, the sound has THAT spark that Music needs, matched to a well tempo'ed pace.
The bass is deep and punchy, while the mids tend to bring every particular to the listener's attention. Micro and macro-dynamics are hence excellent while the virtual image moves towards the listener's seat.
Actually, I found this attitude quite disturbing, especially with small ensembles and jazz trio's and quartets. I've never liked the in yer face attitude. Simply put, it doesn't sound natural to my ears. For example, when playing "Piano man" by Billy Joel it should be clear the respective position of the piano and of the singer's voice. With the modded AM Audio player everything moves upfront and becomes a bit unnatural.

Summarizing, I'd say that the modded unit sounds WAY BETTER than the stock one, in terms of tonal accuracy, harmonic richness and dynamic vitality. If you already own a VRDS-9 and are in the market for a system upgrade, this is one of the most dramatic tweaks you can perform. It sounds like adding an outboard hi-quality DAC without the hassle of an extra cabinet and a new digital cable. The soundstage isn't exactly like I'd like it to be but life is full of compromises, ya know :-)
Perhaps the outboard AM Audio PSU would have improved things even in this department, who knows? I haven't had the time (and will) to add another variable to the comparison test :-)

Nothing to say about the quality of craftsmanship of the VRDS-9. Really top-class stuff. It is a joy to see how smoothly and flawlessly the VRDS transport works.
From a pure sonic point of view, the VRDS-9 - standard - sounds too laid-back to suit my taste. In my opinion, one must expect more from a 1,000 $/Euro CD player.
The modded unit is a REAL upgrade and doesn't cost an arm and a leg. I didn't like the soundstage created by this unit and the increased output level reminded me those "smart tricks" that make a listener prefer a component over another on quick A-B comparison tests. Perhaps I'm wrong, but untrained listeners will find the modded unit better only because it sounds louder. I know it is a silly argument...but still it makes me wonder. Apart from this "cheap trick", the modded unit elevates the value/price ratio of the stock unit and makes it become a serious contender for any CD player in the 1500-1800 $/Euro range.

Understatement works. AM Audio put the real things where they really count (inside) and left the unit unchanged outside. Perhaps marketing gurus will find this decision a bit suicidal but, believe me, this is one of the least expensive and most effective upgrades you can perform to your Teac VRDS-9 CD player.
The very same output stages are used by AM-Audio to upgrade the Teac VRDS-25X and the Teac D-70 DAC as well. As you may know, AM Audio is mainly concerned with the Italian market but I'm pretty sure they won't refuse to do the upgrade if you ship the unit from an European Country. Otherwise, I think you can to buy the modded VRDS-9 directly from them.