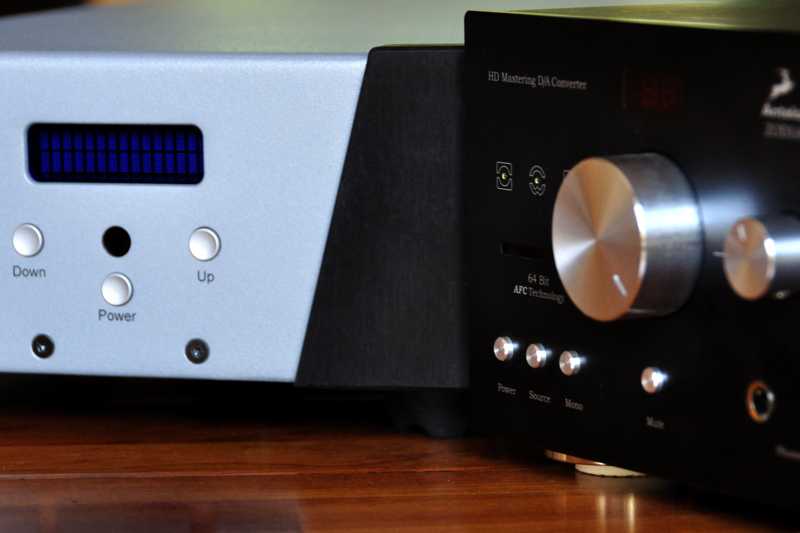 Signs of the Zodiac

For a lot of people a DAC like the Cambridge Audio DACMagic will be all they ever need. But there are others able and willing to spend more to get an increase in facilities and an improvement in sound quality. There's even the possibility that they might use a DAC as the hub of a complete digital system, instead of a a preamp. The two DACs on review today are a couple of the options that such a person might consider. So, how much of a step up in sound quality and facilities does an extra £1000 bring?

Second up in the Wyred4Sound range, the DAC2 costs around £1300. TNT's own Nick Whetstone reviewed this DAC a couple of months ago so I won't go into a lot of detail here.

The DAC2 has source switching, volume and (unusually) balance controls, all of which can be accessed via the small, plastic remote control. The volume control is in the digital domain and so is, to all intents and purposes, completely transparent acoustically. Build is very solid and professional with the exception of the remote which is very basic and not a pleasure to use. Its angle of acceptance by the unit itself is pretty narrow too so you have to be careful about where to site the DAC if you want to use the remote. Whilst the build of the remote is basic it is a very useful feature, especially if the DAC is used with multiple digital sources. Even if used as a single source into an integrated amplifier it gives a degree of fine volume control that may not be available from the amplifier alone. 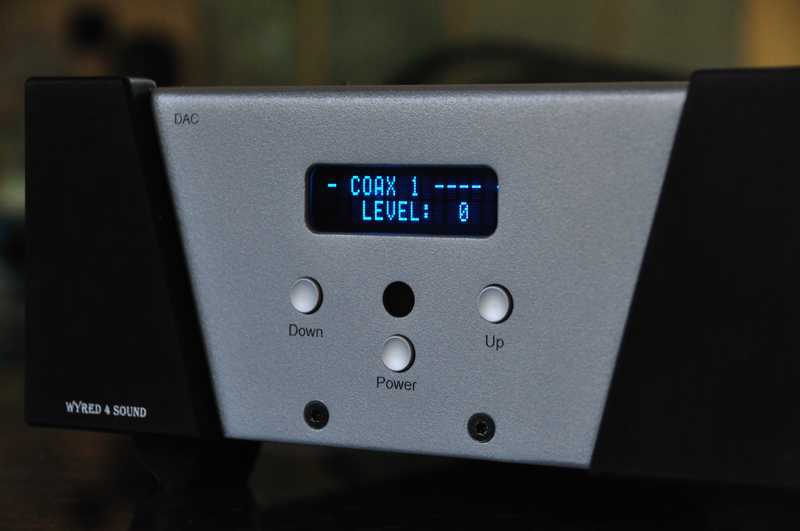 One shortcoming on the DAC2 as far as use as a preamplifier is concerned is the lack of an analogue input. So if you have an all digital system it will be fine to use direct to power amps but if you need to introduce a record deck or virtually any other analogue element then that option is no longer viable. The only analogue capability is a home theatre input which bypasses the volume control.

The sound quality has attracted mixed views amongst those who have heard it. It received rave reviews in the US but a more muted response on forums in the UK. My initial impression was of a very capable converter that may not be entirely transparent in the upper ranges. It makes up for this with a real dynamism, especially in the speed of bass transients. I gained a definite impression that the DAC had been voiced to sound "analogue". My listening notes say things like: "powerful, forward punchy bass, rocks nicely". It laid out a wide and deep soundstage within which the instruments were clearly defined but not etched as finely as with the Antelope. My initial impressions were formed auditioning the DAC through my normal Musical Fidelity amplifier. At the end of my time with it I had the opportunity to try it with a Wyred4Sound i1000 integrated. That amplifier was exceptionally accurate with an almost lean character. When paired with the W4S amplifier the tonality of the W4S DAC made a lot more sense. The timbre suited that amplifier far better, the richness of the sound picture given by the DAC being held in check by the tightness of amp to give a pleasing sound overall.

The basic sound of the DAC is also available, without the volume control and some of the connectivity in the £900 Dac-1. The main connectivity difference is in the USB implementation. The DAC2 has asynchronous 24/192 capability, whereas the DAC-1 has a fairly standard 24/96 input. Much will depend on what you intend to do with a DAC. As a conventional CDP upgrade with an input for a computer, the DAC-1 appears to offer far better value (£400 seems a lot to pay for a, not very good, plastic remote control). If you're considering dispensing with preamps however and developing a PC orientated, all digital system using a lot of high definition material then the DAC-2 could be worth the extra. "Horses for courses" as they say. There is a lot of competition at the sub £1K level and although the DAC2 should be one to listen to if you get the chance, especially if dynamics are important to you, I'm not familiar enough with the competiting machines to give a firm recommendation.

The Zodiac+, at £1895, is a significantly more expensive machine, although again there is a stripped down model available at a lower cost. Connectivity is comprehensive albeit with an odd choice of mini USB for the USB input. Hardware feels solid and controls work well. The unit features a very clear and open sounding headphone amplifier (with two outputs so you could share with a friend if you felt so inclined), source switching and a volume control but on this model there is no remote control. Although a remote is available on the next model up in the range (at £2395!) it struck me as a seriously false economy to fail to provide such a basic facility on a converter of this cost, especially since it could be used quite practically in place of a conventional preamplifier. Unlike the W4S the Zodiac does have an analogue input routed through the volume control so it could be used with, for example, a record deck. Somewhat curiously the front of the converter features a dedicated button to mix the music to a monophonic analogue signal. I suspect this is an artefact of the professional background of the DAC since this seems a feature with little regular domestic application. Having said that, if mono DACs are a niche market then Antelope have it all sewn up! 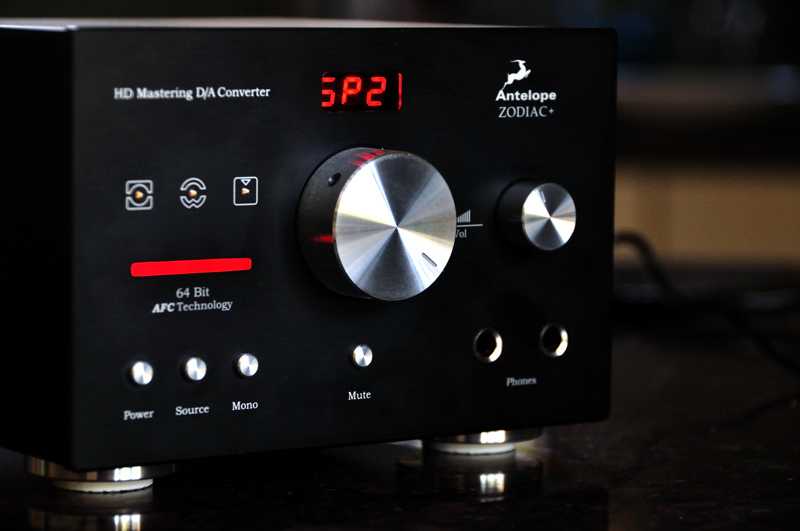 Build quality is less massive than the Wyred4Sound and the power supply is off board but the unit still feels well built. The power cable connects to a socket with a screw collar to ensure a firm connection which is a good touch. Visually, to me, the Zodiac+ is more attractive and less overtly professional looking. That will be very much a matter of taste but it's easier to envisage this unit escaping the confines of the hi-fi rack and into a more overt display. One small "feature" that I found irritating in that context though is a small but unusually bright light on the front of the unit that illuminates when the DAC locks onto a data stream. That is, of course useful. The issue though is that when the data stream is paused, the light flashes - brightly enough to almost illuminate a darkened room. Given how bright it is it really attracts attention to itself like a child that has had its sweets taken away. I guess this may be to encourage you to keep the music flowing but personally I'd put a bit of black tape over the light or site the machine where it would less of a nuisance. I understand from Zodiac that this has now been addressed and that the light on new units is less bright.

The performance measurements of the Antelope are very good (see their web site for details). The company background is in developing digital clocks for use in professional audio applications and this is exploited to good effect, with excellent jitter, dynamic range and distortion specifications. This was borne out by the listening tests. The Antelope performed consistently well with all the material I threw at it. Although it lacked the punch and immediacy of the W4S it sounded more consistently natural and realistic. My notes again: "clarity, naturalness, ease, unfatiguing, immense detail, spacious soundstage". Instruments were more tangibly real than with the W4S. There was a complete absence of digital edge or glare to the sound. It was almost as of the instruments had more confidence in their own identity. Bass was less forward but still both substantial and detailed. Mid range had a delicacy that was beautiful with vocals. For part of the time I had the DAC I was able to compare it to the reference class MSB Dac iv which is capable of delivering a staggering sense of realism in describing instrumental tone and textures. Although the Zodiac+ did not give the same absolute depiction of reality it was not that far behind.

When paired up with the W4S amplifier, the Antelope lost quite a bit of its weight and although it gained in resolution and sounstaging compared to my Musical Fidelity I didn't feel it was a match that showed the Antelope at its best. In that company it is likely that the more substantial power supply of the Antelope Gold would deliver a weightier performance that would be a better match.

I listened to the DACs with my main system, comprising Lumley Monitor 250 3 way floorstanders and a Musical Fidelity A3.5 integrated. For transports I used a Shanling CD-T80 CD Player and an Asus netbook via a KingRex 192 USB to Coaxial converter. Both DACs played well enough in my system that I was encouraged to listen to the music rather than the machines. To give you a feel for what I found here are some more thoughts based on my notes.

Rickie Lee Jones debut album - Chuck E's in Love - click test: a few seconds into this track there is a finger snap in the right channel that really kicks the rhythm along. On some systems it can get a bit lost in the mix. Both of these converters had the necessary clarity to bring that finger snap out and get your foot tapping. After that, I had a slight preference for the W4S. The drum track was noticably punchier with that converter and the bass line easier to follow (because it was more forward). Cymbals were very good - clear and metallic. Moving on to "Easy Money" from the same album, there was impressive detail (all the little finger movements on the double bass strings) as well as weight in the bass introduction. Vocals were well defined. Sticking with the same album the relative richness of the sound of the W4S suited "Last Chance Texaco" giving a smooth swetness to the 12 string guitars.

Bombay Bicycle Club - Flaws (a really well played and recorded album that offers a modern take on a 1970s style)- Both converters produced good images but the Zodiac was deeper spatially with the brushed snare on "Rinse Me Down", for example, set right back in the mix and the vocals tangibly in the room.

Van Morrison - When the Healing Has Begun (Into the Music). Antelope - well balanced, smooth presentation. W4S resonant vocal - almost euphonic but with considerable power on the kick drum.

Both of these DACs betray their professional background e.g. basic remote, flashing light, mono button. Perhaps as a result, neither would yet be quite enough to replace a pre-amp at the core of a system. They do give a better sound than more basic DACs, probably as a result of improvements to the analogue stages as well as the improved clock in the Zodiac. In absolute terms though the difference between these DACs and their competitors - at whatever price level - will be small unless they are paired with highly revealing systems. If there is something about the sound of your system that you are unhappy with, a DAC is not likely to be the place to start.

With thanks to UK Distributor Itemaudio for loan of the equipment.