Swing with the Best 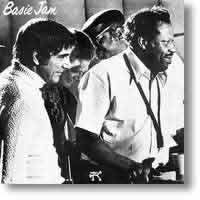 Lets see if I can do his history in 500 words or less.

This is a guy that needs no introduction. Over the years, William "Count" Basie has been a favorite of the Jazz fan. Heck, in 1944 alone, the Count sold 3 million records. That's huge, in fact, back then that's mega-star status. For almost 20 years, that Big Band sound ruled the music industry.

Speaking of Heck, I'll bet you didn't know, Heck is where people go who don't believe in Hell. HA! LOL! Oh, I kill myself sometimes. Anyway, back to our regularly scheduled program, sorry.

We know the Count today as a pianist, but did you know that he originally started playing the drums? When he was a young boy in Red Bank, New Jersey, he decided to change to the piano after realizing a classmate could play the drums better. That classmate was Sonny Greer. Sonny went on to spend 31 years playing for Duke Ellington and his orchestra.

During the 1920's, the Count refined his playing skills as an understudy to two of the Jazz worlds greats, Fats Waller and James P. Johnson. At the time, pianists were in demand to accompany the old vaudeville acts. Fats recommended to Katie Crippen (And Her Kids Troupe) that the Count replace him as his successor. This led the Count to tour America playing at black venues then known as the "chitlin circuit". In 1927, Basie found himself stranded in Kansas City, Missouri after the Gonzel White tour fell apart. Fortunately, he found a full time job at the Eblon Theater playing the organ as accompanist for silent movies. Within a year he found himself playing for bassist Walter Page and the Blue Devils. In 1929, Banie Moten's Kansas City Orchestra absorbed most of the Blue Devils and they continued to play K.C. and the southwest territory.

In 1935 Banie Moten, leader of the Kansas City Orchestra, died in a car accident. Over the next year the Orchestra members went on to build a smaller band centered around the rhythm section. This nine man group called themselves The Barons of Rhythm and consisted mainly of Basie on piano, Walter Page on bass, "Papa" Jo Jones on the drums and Lester Young on the tenor sax. During 1936, The Barons played out of the Reno Club in Kansas City. This was arguably the place to play in K.C.. This is where Basie got his nickname of The Count. People figured since there was a Duke (Ellington), and an Earl (Hines), why shouldn't there be a Count? Anyway, Radio station WHB began transmitting The Barons performances several nights a week. This is where Basie got his "big break". Then writer and musicologist for Downbeat, John Hammond, happened to hear the broadcast in Chicago on a short wave radio. He called Benny Goodman and told him to give it a listen. They both agreed there was huge talent there, and shortly thereafter in 1937, Count Basie and The Barons of Rhythm got signed to Decca. The rest is history, so the saying goes.

Getting back to the Count's style of play (wait a minute, I was never there to begin with), it's kind of interesting, as opposed to the traditional conducting of an orchestra where you stand in front of the masses and wave a baton to keep everybody in time, Count Basie did it with the keys on the piano. He actually considered himself a "non-pianist". He would lead his orchestra by playing a brief melodic interpose that would lead his band where he wanted to go while still blending into the rhythm section.

The Big Band sound of Count Basie and the other orchestra leaders dominated dance halls and the airwaves for almost two decades. As the Big Band sound waned in the 50's and early 60's, the Count found himself floundering for a musical direction. He had some modest success during the 60's doing covers of pop songs and pairing with vocalists like Frank Sinatra.

It wasn't until Norman Granz formed Pablo Records in 1973, that the Count and dozens of other Jazz greats were able to do again what they did best......play jazz. And play they did.

Side bar - Now there's a difference (in my mind anyway) between the recording quality and sound reproduction. The recording quality has more to do with proper selection and placement of microphones and musicians, where the sound reproduction has to do with the mixing of the master tapes and the amount of processing that is done before final mix. Sound reproduction encompasses placement of the performers on the soundstage (sound level of the instrument bringing it forward or back in the music, stage left, right, or somewhere in between). Then there is the amount of external processing like eq's, noise gates, filters, and the amount of "ambiance" or reverb electronically added. Are you with me so far?

Basie Jam is pure Swing. This record was produced by Norman Granz and Pablo Records. Norman had one of the greatest stables of Jazz and Blues performers to have ever picked up an instrument. Some of the more notable ones in this octet (beside the Count) are J.J. Johnson on trombone, Zoot Sims on tenor sax, Henry "Sweets" Edison on trumpet, Irving Ashby on guitar and Ray Brown on the bass.

Listening to this piece objectively (which is really hard to do BTW), I here very little surface noise. The actual piece of vinyl is a decent weight, I'm guessing 120 grams. The grooves are cut nice and straight, which means my tone arm isn't jerked back and forth from playing an egg-shaped record which leads to tracking errors.

This recording quality is awful good. It's not great, but it sure comes really close. There are only a couple of things that I heard that keep it from the "great" status. The first was Zoot Sims' tenor sax. It sounds just a wee bit thin. I'm guessing here, but I think it was their choice of microphone. A tenor sax has a really fat sound, especially in the lower registers. This recording didn't completely capture that. It came really close but in this respect it falls ever so slightly short.

Next is Count Basie's piano. For some reason, they chose to record it with the top closed. To further reduce his pianos dynamics, it sounds like it is against a wall. See, instruments when they are recorded have wall interactions just like out speakers do. They reflect, reverberate and have will produce artificial gains and losses just like speakers. If you place a piano or drums too close to a wall and then mic it, they sound closed and thin. Move them away by a few feet (or meters) and you will get a completely different sound. That sound is far more lively and dynamic. Albeit an assumption, obviously I wasn't in the studio, it just sounds like that's what was done.

As for the rest of the instruments they are as close to perfect as you can get. Listening to the gentle taps of the cymbals, it's nice, clean and crisp. Irving Ashby playing his hollow bodied guitar, comes through my speakers warm and luscious, just as it should. Whether it's J.J. on the trombone or Sweets on the muted trumpet, it doesn't get much more lifelike than this. As for the bass, it's nice and firm but not overpowering. Another nice thing, I didn't notice much, if any, processing. Granz and company did a really good job on this one.

On this record, the detail is so fine you'd swear these guys were in the same room with you. Speaking of details, a few really jump out at me. First is Louie Bellson playing drums with a brush on the slower songs. You can almost count the number of metal bristles on his stick. Second, I don't know how often you've sat and listened to a brass instrument up close and in person, but often, you can hear the musicians breath through the bell of the horn. You can hear this clearly on this recording. It adds a marvelous sense or realism to the recording. Finally, you can hear Louie "jawin" in the background, just gettin' into the rhythm. Way Cool.

Basie Jam is two sides of some of the best Swing you'll hear. I won't say this often, but of the some thirty odd Pablo releases I have, I've yet to find one that doesn't sound really good, or at least better than 95% of the vinyl that's out there.

Basie Jam is absolute audiophile quality at 1/10th the price. Hey, I only paid $3 for this used promotional copy. Keep in mind who produced the record. Norman Kranz. This is the same guy that was responsible for possibly the greatest of Jazz labels, Verve. This guy knew what he was doing in a studio.

Now, all that being said, I've seen Basie Jam on the re-issued vinyl lists from some of the "big" record companies that specialize in re-releases. I haven't heard the re-issue, but I would ask myself before dropping $30 on a reissue, is it really worth it, especially when this is available at your local used record shop or online for next to nothing.

Same goes for any of the Pablo releases. They are, without a doubt, some of the finest recordings out there. My favorites date back prior to about 1980, before they added color to the cover photos. They are stamped on heavier vinyl and have a better sonic clarity than most of the newer issues.

Fantasy has re-issued a large chuck of Pablo's 350 releases on CD. Some of the more popular albums were released as 20 bit Gold re-masters. I haven't heard the CD re-masters, but considering the source material, I can only imagine they sound awful good too.

Hey, even if you're not into Swing type Jazz, give this one a try. It might change your mind. If you don't find yourself tapping your foot or snapping your finger in time, you may need to seek professional help :-). If you are already into Swing, give this one a go before you spend alot more money on a re-issue. I'll bet you'll find, just like me, the original release sounds plenty good and it's not worth spending the extra bucks for the re-issues (unless your copy looks like somebody tap danced on it :-).