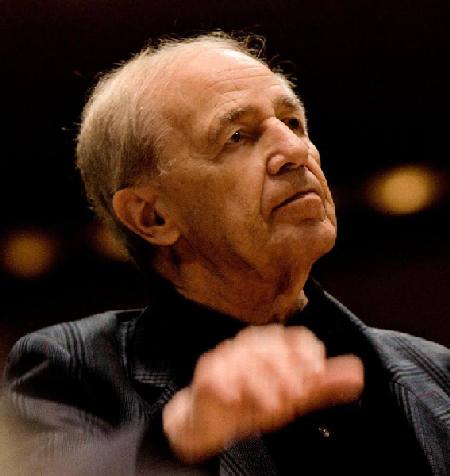 Composer, conductor, musical theorist and advocate for the cutting edge, beginning in the 1950s Pierre Boulez was a voice to be reckoned with in nearly all aspects of classical music. Now that voice has been stilled, just the latest lost from the adventurous generation that set out to remake music, compositionally or interpretively, after World War II.

Although he was a staunch defender of the twelve-tone system and an avowed opponent of music from the 19th century, Boulez held major conducting posts with traditional ensembles like the New York Philharmonic and came to be regarded as an important interpreter of Gustav Mahler. He dismissed popular music out of hand, yet he recorded “classical” compositions by Frank Zappa. A curious blend of contradictions, then.

In many (or even most) ways, I'm the wrong writer to be offering this obituary; my tastes run to the sort of capital-R-Romantic literature and performance practices that he abhorred. I'm hardly well-versed in his recordings, but that is in part because most of my favorite sorts of music that I heard in his recordings back in his heyday struck me as somehow a bit “cold,” so I never actively pursued them. The day after his passing, I heard a Boulez recording of Debussy's Prélude à l'aprè-midi d'un faune, played in tribute on a local radio station, and I'm prepared to admit that perhaps my earlier judgment was callow.
I'd need more exposure to say for sure, however, and time now doesn't permit that. As to his music, it's not the sort of fare that I find appealing personally, and it seems not to have gained much traction outside a tiny fraction of the tiny minority of music lovers who listen to classical, but perhaps it will find its audience in time.

For all these reasons, then, and recognizing that Boulez was anything but traditional, I've decided that instead of writing a traditional, glowing obituary tribute, I'll simply collect a few colorful quotations, culled from the Internet, and let the reader reach his own conclusions. Beyond that, all I can say is that the classical music world is a poorer place for his passing.

The man in his own words:

”It is not enough to deface the Mona Lisa because that does not kill the Mona Lisa. All art of the past must be destroyed.”

”For me, curiosity is life. If you are not curious, you are in your coffin.”

”Revolutions are celebrated when they are no longer dangerous.” (On the bicentenary celebrations of the French Revolution)

”The most elegant way of solving the opera problem would be to blow up the opera houses.”

And finally, in the words of Frank Zappa, whose classical music received few or no recordings by other conductors of major stature:

”[Boulez] reminds me a little of the character that Herbert Lom plays in the Pink Panther movies. He doesn't have the 'psychotic wink', but he has some of that nervous quality about him, as if he might -given the proper excuse- start laughing uncontrollably. I went to lunch with him in Paris, prior to the Perfect Stranger recording. He ordered something called brebis du [fill in the blank]-- I didn't know what it was. It was some kind of meatlike material on weird lettuce with a translucent dressing. He looked like he was really enjoying it. He offered some to me. I asked him what it was. He said, “the sliced nose of the cow.” thanked him and went back to my pepper steak.”