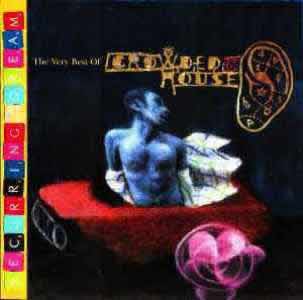 Like most of us, I first heard the Finn brothers back in the days of Split Enz. That was a long time ago, 1980 in fact. That's when the hit single I Got You was getting alot of airplay. Over the next few years the band struggled with several lessor hits and in 1984 Neil Finn decided to dissolve Split Enz after his brother Tim had left.

In 1985 Neil formed the group The Mullanes with Paul Hester (who was there during the break up of Split Enz) and Nick Seymour. They played a few gigs back in the land down under, then it was off to America.

After signing with Capitol Records they released their debut, self titled, album Crowded House in 1986. In the ensuing years they released Temple of Low Men in 1988 which really wasn't their best effort. Then in 1991, facing rejection from their record label Capitol, brother Tim rejoins the group and they produce Woodface. This was a very good album, despite the obvious American bashing in the song Chocolate Cake. In 1993 the group recorded their final release, Together Alone.

In June of 1996, Neil announced the breakup of the group in London. That brings us to Recurring Dream.

Recurring Dream, The Very Best of Crowded House, contains nineteen songs. It's a double album with a gatefold sleeve. They chose four songs from each of their prior albums and added three previously unreleased tracks. This is a true best of album. It's loaded with some of the best songs they recorded. In fact, they could have added a few more. But so it goes with vinyl, they had to watch the playing times. The CD release of this album also contained a limited edition live CD with fifteen additional songs.

I've got to say this up front, I really like the music Crowded House did, but they did a really poor job mixing it down. Not just one album, but all of them. Just pop one in your CD player and listen. Great music, just not real musical to listen to. They are horrible mixes, to be blunt.

As I sit here and listen to Recurring Dream, it makes me wonder why they bothered to put this on vinyl if they weren't going to re-master it. When they transferred this to vinyl, they just took the master tapes and started cutting without regard to the sound quality, or more importantly, how it could be improved. Maybe I'm expecting too much but I don't think so.

When a manufacturer makes a conscious decision (in 1996) to issue something on vinyl, they are playing specifically to you and I, audiophiles with turntables. They consciously charge us more than they charge for the CD version. See where I'm going with this?

I compared this UK EMI pressing of vinyl to the Crowded House CD's that I have, switching back and forth from CD to vinyl. There are huge differences. The CD's, as poorly mixed as they are, contain lots more information than this vinyl release.

When they started the vinyl mastering process, they discovered that the original master tapes have just tons of treble, as do the CD's you and I bought . That's bad news for vinyl. You can't just do a straight transfer. The vinyl engineer must either compress and/or limit the amount of treble that gets transferred to the lacquers. Most times it's both. That translates directly to a loss of information and musical detail. That's exactly what happened here. One of the other things a good vinyl engineer will do is use a de-esser on the vocals to tame some of those nasty sibilants. Unfortunately, no de-essing was done to this release. Or if it was, you sure can't tell by listening.

Listening to several tracks side by side, vinyl to CD, there is information missing. Take for instance the song Weather With You from the Woodface release (great song BTW). Towards the end of the song they brought the bongos or congas forward into the mix (it's hard to tell the mix is so bad). On the CD they don't sound too bad, not the best but just OK. On the vinyl they sound muddy at best. Very non-distinct, no definition at all. I could go on and on but I think you get the idea.

The bass on the original CD's were a bit on the light side. The treble and upper mids were way overdone. Now we have a piece of vinyl where the bass is still light (but true to the original) and now a compression and detent of the treble. Result, really shouty midrange. You talk about fatiguing!

I don't mean to sound too negative. This release does have some good points, I guess. First the treble has been subdued. Expect somewhere around a 4 to 6 db drop in the highs. Another good thing, this is truly a "best of" album. There are tons of great songs on here.

As I sit back and read what I just typed, I wonder...... Am I being as close to objective as I can be? I think so. That being said, I can't honestly recommend buying this album.

Save your money and go buy some real vinyl.