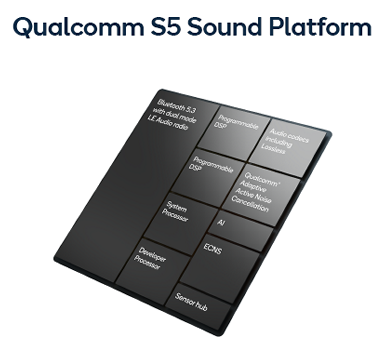 Despite being labelled HD, the aptX Bluetooth codec is far from being a really lossless protocol. In other words, music transmitted via aptX HD devices is still compressed, with a lossy compression protocol, more or less like MP3. In other words, it can sound decently, but it is not HiFi by any means. One year ago Qualcomm announced the release of a really lossless Bluetooth protocol, the Lossless aptX. What was lacking was the hardware, that is the chipset that could be used on HiFi components or mobile devices, in order to support this new feature.

Qualcomm has released the new S3 and S5 chipsets, which allow Lossless Bluetooth streaming, and much more! The company will provide these new chipsets to customers like Yamaha, Cambridge Audio, Master & Dynamic, and Audio-Technica, just to name a few of the most relevant ones.

At Qualcomm, they have optimized several of their core audio and Bluetooth technologies to scale up to the bandwidth of over 1.1Mbps, needed for lossless music streaming. The new S3 and S5 platforms now offer seamless quality scaling - with both CD lossless audio and 24-bit/96kHz high-resolution audio (with compression).

The wireless earbuds and headphones will now offer features that have never been available before, enabled via these S3 and S5 chips. This will come at a cost, though: a phone or other source device must be equipped with Qualcomm's Snapdragon Sound technology. Mobile companies like Samsung, Motorola, and OnePlus already make Snapdragon Sound handsets, but Apple and Google don't incorporate it. Will this limit the success of this new technology? We don't think so, since it offers some quite unique features: as said, the S3/S5/Snapdragon Sound combo will provide lossless, 16-bit CD quality, as well as lossy support for hi-res, 24-bit/96kHz audio tracks. Even latency has been improved: Qualcomm says the new sound platforms will have a latency as low as 68 milliseconds, which is 25% faster than its previous generation of products. Low latency is good for high-quality audio, but also of paramount importance for gaming applications. And if this is not enough, the S3 and S5 chips will feature a better active noise-cancelling software, with the possibility to react to changing conditions like wind noise or poorly fitted earbuds or headphones.

Moreover, the S5 QCC517x Sound Platform offers ultra-low power performance with double the compute, compared to its predecessor QCC515x. The chipset offers a CPU clock speed up to 80 MHz, a 32-bit CPU architecture and a 2x240 MHz DSP clock speed.

Well, it seems we will be going to use Bluetooth connection even for high-quality audio, which is what audiophiles have been asking for years. Bluetooth connection is user-friendly, but sound quality has never been adequate for our purposes. The end of lossy compressed music is near!