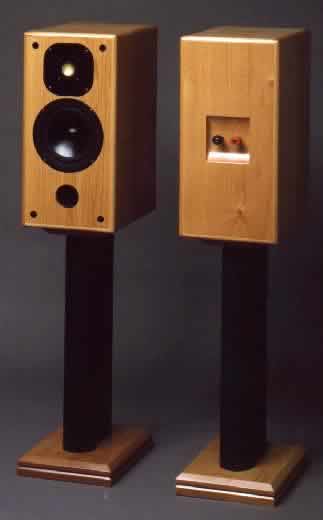 Probably you already know Strateg, a small Italian HiFi Company, thanks to our interview with Lorenzo Corsi, the man behind the Roman firm.
Strateg has been around for 20 years or so, designing and making HiFi components always having in mind something unusual and unconventional, so when my phone rang and Lorenzo invited me to visit their labs I was glad to put my laptop, my Yashica and some CDs into my bag and leave for Rome.
Strateg is a small enterprise, managed by real audiophiles and Music lovers, which makes loudspeakers, electronics (integrated amps, power amps and preamps), cables and various accessories (spikes, tables).
Because of the size of the Company and the extreme care they put into their designs, the Strateg stuff is pretty expensive, though they are trying to make some more affordable product for the next future.

Here at your left you can see the most famous Strateg product, the Cyan loudspeaker, a design which has remained virtually unchanged for 20 years, now available as an "Evolution" version.
Among other pretty unconventional features, the cabinet of the Cyan has NO absorbing material into it since, as Lorenzo Corsi says, "a good loudspeaker project doesn't need any damping stuff if the cabinet has been properly designed".
A pair of Cyan costs around 5,000 US $, including stands. The drivers which have been used are well known to DIYers: a Focal T121 tweeter and a Seas P17 woofer. A smaller model, named Assolo, is available for 2,000 US $, while a floorstander named Trio costs around 5,500 US $.

Strateg makes also both tube and solid state electronics, since the designer believes there's no "winning" technology in HiFi: tubes work well into preamps while solid state seems to work best into power stages. So they say.
An interesting hi-priced integrated, called Sintesi, is claimed to have 110 watts per channel in class A which is quite surprising, given the size...I find it hard to believe that, the amp remained damn cold during the listening tests...I've owned (and still own) some REAL class A power amp and they become so damn hot that it is dangerous to touch the cabinet!!!
The Standard Sintesi doesn't come cheap, at 5,500 US $, but it will be available as a simplified version at a lower price anytime soon, just to meet the desires of budget-conscious audiophiles. List price should be everything near 3,000 $.

During the long listening session the main system consisted of a standard Sintesi which drove a pair of Cyan. Two huge monoblock power amplifiers were available but disconnected.
The source was a hi-end Teac transport/DAC combo, heavily modified by Strateg (sorry, no detail was available about the mods :-( ).
Interconnects, speaker and mains cables were all hand-made by Strateg. The cost of some of these cables was, dare I say it, plain excessive... :-)
Everything was coupled to the Strateg wood tables with the Kpp Strateg spikes. In other words, the whole system was home-made by Strateg!
I introduced this Company as unconventional, well, there are many reasons for this...but please have a look at the listening room and you'll start understanding why... 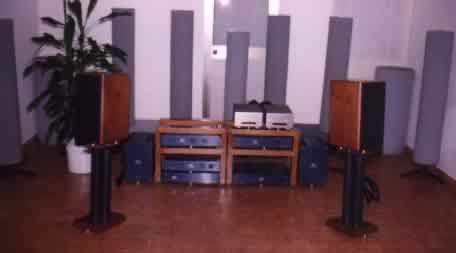 Oh My, how did they place the loudspeakers? :-) YES!!! The two Cyan's are not in the usual triangular position, firing towards the listening seat...they are simply facing the side walls!!!!! I can hear you asking WHY, at least :-)
Well, the reason is simple, this way the listener receives a large amount of directly reflected sound from the side walls and, no, you still get a perfectly centered 3D image. Funny, weird...but true.
Of course you need to use a large amount of Tube Traps, as the picture shows.
The listening test was interesting enough to convince us to ask some component for a review on TNT-Audio. It is very HARD to judge any HiFi component inside a chain which has been built "around" it, so I won't even try to give you an idea on how the whole set-up sounded like.
Considered the poor room acoustics (just bearable thanks to the pletora of Tube Traps) the result was interesting and my biggest surprise was the strange effect caused by the fancy placement of the loudspeakers. You need to get used to that.
One thing that I appreciated a lot was the possibility to listen to a large selection of every kind of Music, from classical, jazz, rock and even heavy metal!!! Some Iron Maiden tracks were played too (absolutely loud, of course!).
This is the kind of open-mindedness I like since way too many audiophiles/manufacturers insist on playing only boring audiophile tracks on their systems.

The staff was very friendly and we've had a great time talking about various topics: we eventually ended up -in a typical Sardinian restaurant (in Rome!)- chatting together about tweaks that could be applied to....sport cars!!! Yes, the guys at Strateg are, like me, very fond of small fast cars :-)
Then, no matter how hard I tried, it has been impossible to steal some secret about the way Strateg products are designed and made...Lorenzo (owner and chief designer) likes to keep his ideas for himself and his staff :-)
Later in the afternoon, with my stomach full of pasta alla carbonara and mussels, Stefano Monteferri (collaborator at TNT-Audio, the TNT-TTS guy) joined the group and we tried some interesting experiment with different tip toes.
The Strateg set-up proved to be very "reactive" to any minor change (spikes, cables), a clear sign of high transparency and microanalysis ability.
The whole day spent at Strateg ended at Stefano's home, with a listening test of the new TNT-Audio DIY loudspeaker, the Skene' mid-sized bookshelf (more about the project soon on TNT-Audio).

I thank the whole Strateg staff for this factory tour and, for more infos on Strateg products, I suggest to contact them or to pay 'em a visit when you are in Rome.