Last time, as you will recall, we met the most common permanent styli of the acoustic era. This week, we join little Victor as he tells Uncle Tommy that needles you can't change are boring, and it's a lot more fun if you get to swap them out as part of your record-playing ritual. Yes, it's time to meet the Replaceables in today's episode of As the Disk Turns!

OK, I'll grant that's an uncommonly lame introduction, even by my depressed standards, but the history of records sometimes does seem like a soap opera in which the upstart Lateral Clan contests with the old, powerful Vertical Cut family for riches and dominance, and in the lateral cut world playback was all about needles that the user changed with every play: replaceable needles. The most common were made of steel, but, as we shall see, there were other options. 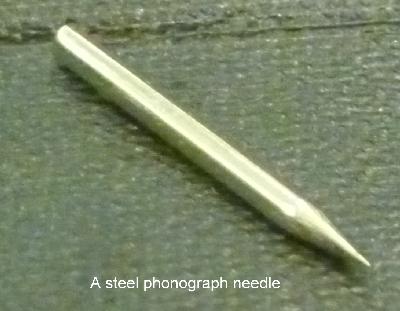 To begin at the beginning, although Edison had contemplated disk records in his original phonograph patents, when going to market he opted to produce only cylinders. The honor of developing the first disk system for the home fell to Emile Berliner, an immigrant to the United States from Germany who at first supported himself by various odd jobs during the day while tinkering as an inventor—admittedly, not nearly as gifted an inventor as Edison—at night. As mentioned in an earlier article of this series, the disk records that he developed embodied a lateral cut groove, first mastered by etching groove tracings into grease-coated metal blanks by means of an acid bath, later (after much patent squabbling that's beside the point for our present discussion) by cutting modulated grooves into wax blanks and then electroplating them, a process that yielded much smoother results. To manufacture and market these new recordings and the machines to play them, Berliner founded the Gramophone Company, but remember, he was creating a whole new system from scratch and lacked Edison's resources. Therefore, he kept things simple and specified that the new records would play with a pointed steel needle mounted in the reproducer by means of a thumbscrew chuck; if the owner of a shiny, new Gramophone could find dedicated phonograph needles at a local dealer, great, but if not, a broken-off sewing needle would do just fine.

The important, er, point about steel needles: each is good for exactly one play of the record. Change the record, change the needle. Why? It all has to do, oddly enough, with the material in which lateral 78s were pressed. We call it "shellac," and in fact shellac was a major component, but it was only one part of a mix that each company guarded as jealously as Kentucky Fried Chicken guards those celebrated herbs and spices. For the first few decades of their existence, disk records invariably incorporated an abrasive, such as carborundum or ground slate, to shape the needle point into a perfect fit for a particular record's groove. If you compare a fresh and a used steel needle under strong light, you'll see that the former has a roughly spherical point while the latter has more of a V point with flat sides running a short way up from the tip. That's the telltale sign of those abrasives at work. Naturally, once the tip of the needle has been shaped for one record's groove, it will be very harsh on any other (remember, on acoustic machines the tracking force was in the neighborhood of 75 grams or so), and a second play will overgrind the tip to the point that reproduction is dulled. So: a fresh needle for every play.

There's more to the humble steel phonograph needle than meets the eye. Not only did steel needles act as the point of contact between record and reproducing mechanism, they also could act as a sort of crude volume control. Acoustic machines, of course, did not have volume control knobs like those on a modern electronic preamp. Enclosed cabinet models might make some provision to cut volume by closing off the horn chamber, be it by equipping the mouth with hinged doors (the Victrola approach, and, believe it or not, a feature Victor patented) or louvers (the approach, also patented, Columbia took with its Graphonolas) or else by providing some sort of shutter that could close off the throat (the approach taken, among others, by Pathé in its Pathéphone and Aeolian Vocalion in its Graduola, which even included an early tethered remote control). Open horn disk machines, by contrast, had no innate ability to control volume at all. Steel needles to the rescue! The enterprising record lover could buy them in different grades, from "loud" or "extra loud" to "medium tone" to "soft tone," the difference being the thickness of the needle shaft: a thinner needle would flex more in playback and hence communicate less mechanical energy to the reproducer's diaphragm. Some soft tone needles were even designed with a wasp waist or mated a segment about the diameter of a sewing pin to a thicker shank to engage the thumb screw. These types are not generally available today.

As an aside, cylinder players and Edison's disc players, with their fixed jewel styli, could not rely on different needles for volume control. For the open horn cylinder machines, one could buy an accessory called a Tizzit, basically a mechanical choke that one could fit between the reproducer and horn where they were connected by a short length of rubber hose. Foreclosed by Victor's patents from including doors over the horn opening, Edison's Diamond Disc phonographs, all cabinet models but housing a separate, pivoted metal horn that curved under the motor, took a different, characteristically ingenious approach: they were fitted with a big ball of fluff that the owner could ram into the throat of the horn by means of what amounted to a bicycle brake cable. Once Victor's patent on doors lapsed, however, Edison abandoned this expensive-to-manufacture contraption and substituted hinged doors in his last acoustic disc models, the Edisonic phonographs. 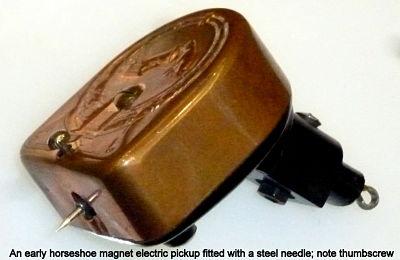 But to return to steel needles, the reliance on abrasives in the record material to shape the needle tip during play at least partly accounts for something everyone who plays acoustic and early electric 78s on modern gear has encountered: the records are nearly always somewhat noisier at the rim than toward the center. At the rim, steel needles were still unground, and so they caused more wear to the grooves than after being ground to fit a number of turns in. The "grind the needle" approach also has practical consequences for what you can and cannot play on a mechanical phonograph. Records made up into the late 1920s or thereabouts were designed for such machines, and they carried a healthy quantity of abrasives. In the early 1930s, electric playback heads began to replace acoustic reproducers, but, oddly, they continued to rely on steel needles secured with a thumbscrew, and again the corresponding record mix contained a good bit of abrasive, as these pickups relied on big horseshoe magnets and were only somewhat lighter than the mechanical devices they replaced. Moving on into the 1940s, however, cartridges got lighter, and some even abandoned steel needles for jeweled styli. Hence, records from about the mid-1930s onward carry significantly less abrasive and should not be played on mechanical phonographs—in other words, don't play World War II Tommy Dorsey on your World War I Victrola! 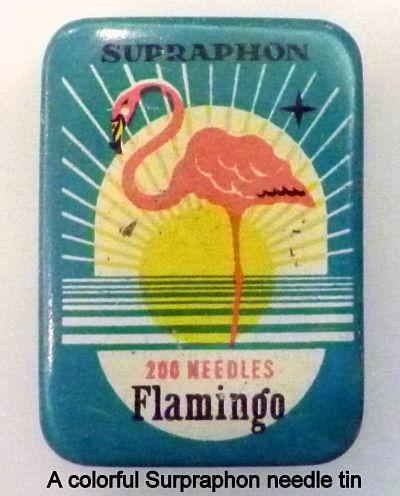 Steel needles are still available, mostly from specialist dealers catering to the antiquarian trade, and today they usually come in little generic brown paper envelopes or clear plastic bags. In their heyday, however, when they were standard items of day-to-day commerce, they were often sold in colorful printed envelopes or tins in an effort to differentiate a commodity product. Naturally, the big record companies all sold needles under their own names, but so did a vast array of others, and the tins are popular collector's items themselves, either as objects to be collected in their own right or, more often, as adjuncts to collections of records or machines. 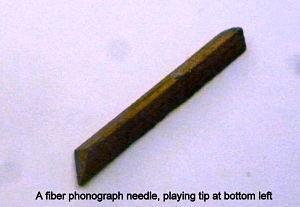 Steel needles were and remain the most common choice for playing 78s on mechanical and early electric phonographs, but they were, and to some degree are, by no means the only choice. One alternative, which retains popularity with some collectors today, is the "fiber needle," generally made of bamboo. The fiber needle has a triangular cross section and, unlike most other alternatives, looks nothing like sewing needles. By applying a special cutter, one end would be trimmed at an angle to produce a sharp point, and the needle would be oriented in the reproducer chuck to place that point in the record groove. The needle socket of many acoustic reproducers, particularly Victor products, was triangular to facilitate use of these needles. Advantages claimed for fiber needles over their metal counterparts include the following: producing a softer, more natural tone; better suppressing surface noise; causing less wear; and being reusable, at least to a degree, since the cutter could be repeatedly applied to refresh a worn point. On the other hand, at least one contemporary source disparaged them as prone to "shouldering," losing their tip mid-side and thus inflicting a blunt end on the record grooves. I have never used one myself, but I was unimpressed with the sound when a fellow acoustic phonograph collector once demonstrated a couple for me.

When playing more than one side per needle was mandatory, as with the record changers that became available starting in the later 1920s, the owner could buy chromium needles, each good for a few sides. In addition, they were said to be useful in clearing manufacturing debris from the grooves a new record. Chromium needles were also said, however, to cause much greater record wear than steel in the long run, and although slower to wear than soft steel, they did lose playing quality as the side count piled up.

You may encounter replaceable needles made, or claiming to be made, of osmium. While these will fit the thumbscrew chucks of early machines, they are not suitable for that use. They were intended for much lighter electric pickups that came into use in the 1940s and 1950s and when fitted to acoustic reproducers will quickly damage records. Please don't ask me how I know…. 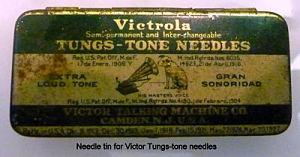 A final type that bears mention is the Victor Tungs-tone needle, which, like the Pathé sapphire ball, comprised a durable tip mounted on a brass shank. In this case, however, the tip was a cylinder of tungsten. As tungsten is much harder than steel, the tips would last for many plays, particularly if the user followed Victor's advice—completely at odds with the practice appropriate for steel needles—to rotate the stylus a quarter turn at regular intervals. Naturally, no Tungs-tone styli are available as current manufacture, but they have their advocates among collectors who have managed to find serviceable old ones. I do have some limited experience to recount, as I tried one in my Pathéphone when I was a beginning collector. The combination was not kind to the records that I played with it, but the fault may have been with the odd angle at which the needle is set in the Pathé reproducer. I have since read that Tungs-tones are not advisable except in well-adjusted Victor machines that present the needle squarely to the record. They also reputedly are very hard on records that are more than slightly worn. My advice, then, would be that if you plan to try a Tungs-tone stylus in a mechanical phonograph, stick to Victor machines and tread cautiously, experimenting with a few "junkers" before playing any record of importance to you. 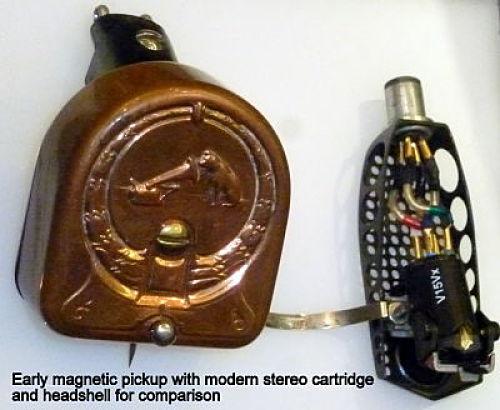