First in a prospective series about special old records

Recently, an Internet discussion of old Russian recordings led me to dig out (and copy) something I hadn't played in a long time: the 1951 first piano concerto of (Soviet) Georgian composer Otar Taktakishvili. As far as I know, it's had two recordings, a fairly recent effort that I haven't heard and my earlier recording dating to the 1950s and issued, from Melodyia masters, on LP as Bruno BR 50190. The soloist is one Alexander Iokheles, about whom I know the following: he made this record. Abram Stasevitch, about whom I know about as much as I do about Iokheles, leads the “National Philharmonic Orchestra,” which, of course, could be just about any cog in the Russian musical machine of its day hiding out under a Western-assigned pseudonym. Overside is a bunch of (again, Soviet) Georgian folk music performed by a folk ensemble from Tbilisi; I've never worked up the courage to play it, and on this occasion cowardice is carrying the day yet again.

Bruno was one of those little US labels that tried to carve out a niche in the classical market on the cheap by issuing Soviet Russian recordings under license, and like most such it offered material that today seems interesting or more but that in the US market of its time didn't fare too well. Packaging is sturdy but spartan: a plain red album cover with a rectangular gold sticker, wrapped around the spine, giving the contents and what pass for album notes. The latter are mostly an embarrassing attempt to conjure up a connection between Taktakishvili's concerto and the score for the film Exodus. Hence, on the front we get, in big print, “GEORGIANS--The Direct Descendents of King David--Could this be The Inspiration for the Music of EXODUS” and then the actual work and performers in much smaller print underneath. On the reverse, we are given a bunch of hoo-hah about how claims the Exodus score was original just can't be true considering how much it resembles themes in the concerto and traditional music as presented by the folk group--but the listener can judge for himself. Balderdash of the first order. Note that by the time the film was released, stereo recording was well established; presumably, Bruno was fighting a desperate rearguard action to salvage commercial viability for its dated Soviet mono catalogue item. 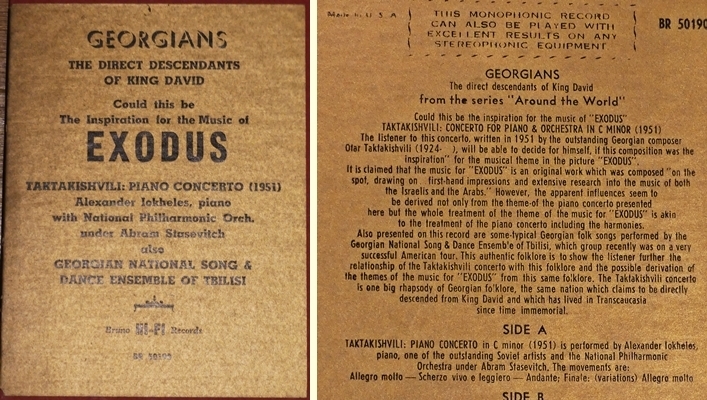 On that subject, sonically the record is very much of its time and place. I'd describe the recording quality as “serviceable,” not bad, not the best that was being done at the time, agreeable enough but sometimes congested or overdriven in heavily scored passages. The piano comes through clearly without undue spotlighting. My copy plays pretty cleanly but definitely is not “new old stock”; it's seen its duty with '50s-'60s vintage cartridges. As sometimes is the case with such records, I found that it played better with a simple elliptical stylus (Shure M97x) than with a more elaborate microridge cut (Shure V15Vx). As to the performance, I can't imagine anyone seriously bettering what these artists accomplish; they obviously know the work inside out and play with conviction, “selling” the work, Exodus or not.

This concerto is in four movements which feature a recurring theme, or riffs on it, to bind them together. To my ear, the strongest segment is its second movement, a skittish, playful scherzo. The weakest, alas, is the last, a theme and variations set--it's certainly not bad, but I'd say it just isn't strong enough to make a completely satisfying conclusion after what has come before. Notwithstanding the program notes' silly special pleading, the work does have a certain cinematic feel about it. It's not a score for those who seek thorny, grim, demanding Modernism-with-a-capital-M; if you like, say, the Rachmaninoff Second Piano Concerto or Prokofiev's Lt. Kije music--the latter, perhaps coincidentally, the offshoot of a film score--you'll find nothing upsetting here. Indeed, I was tempted to compare this music to the Rachmaninoff, but it lacks that composer's distinctive harmonic language; I think maybe a better analogue would be the Ipolitov-Ivanov of Caucasian Sketches. I suppose that sounds like faint praise, but I happen to like the piece, although it's not the sort of thing that could stand up to “heavy rotation” in a playlist. I'm fully prepared to concede if someone were to call it a guilty pleasure. That said, a pleasure is a pleasure, guilty or not.

DISCLAIMER. TNT-Audio is a 100% independent magazine that neither accepts advertising from companies nor requires readers to register or pay for subscriptions. If you wish, you can support our independent reviews via a Paypal donation. After publication of reviews, the authors do not retain samples other than on long-term loan for further evaluation or comparison with later-received gear. Hence, all contents are written free of any “editorial” or “advertising” influence, and all reviews in this publication, positive or negative, reflect the independent opinions of their respective authors. TNT-Audio will publish all manufacturer responses, subject to the reviewer's right to reply in turn.