Analysis Plus came to my attention a little over a year ago with some splashy print advertising for their line of speaker cables and interconnects. These ads, in case you are unfamiliar with them, feature some pretty impressive arguments for their cable technology, which they call "Hollow Oval".
Basically, the theory (fact, according to the ad copy) is that a round cable causes increased resistance at higher frequencies due to skin effect (less of the conductor is used at high frequencies) and current bunching (higher frequencies, according to Analysis Plus, tends to "bunch up" on one section of the cable.) I'll have to take their word for it: all of the guys at Analysis Plus hold advanced degrees in Electrical Engineering or Physics. I don't.

Actually, they are applying ideas that they have learned through their other venture: the design of circuits for safety devices of automobiles, such as components for Anti Lock brake systems. Because of this, they have chosen to tackle audio cable design with science, as opposed to voodoo magic.
I tend to like this: reasonable scientific arguments to explain why a component sounds "better" or "worse." On the other hand, I am not a "specifications guy: I was when I first started building my system(s) over twenty years ago. I would read all of the specs and technical arguments, pick out the "best", put it all together, and usually end up with something very "unmusical".
I have changed through the years: I read ad copy as entertainment, but select components with my ears.
In fact, two of the components in my system were shipped from the factory without any disclosed specs whatsoever. No matter: they make music that makes me happy, and that for me is the reason for this hobby/sickness.

The Oval Nine speaker cables are very impressive in appearance. As the

model name suggests, it is a 9 gauge oxygen free copper. At each end of the cable are extremely well made, beefy spade connectors. The construction is of very high quality. Also, even though these cables are bulky, they are easy to put just where you want them: they have no tendency to curl They stayed where they were laid. Nice.

I didn't have the opportunity to hear these cables cold out of the box, so I can't relay any advice as to a "break in" period. These cables were initially shipped to Jon Sek, before he left TNT-Audio. I have to assume that Jon did the "break in" before they were shipped to me for review.

I did hear an improvement upon putting these cables into my system. The main difference between these and the other cables I have on hand is high frequency extension. I used these cables with a tube integrated amp, and there seemed to be more "air" there, more "there" there.
Instead of accentuating any particular frequency range, they actually accentuated the venue. It became far easier to determine the size of the room where the recording took place, as well as a better sense of distance between performers in the room. 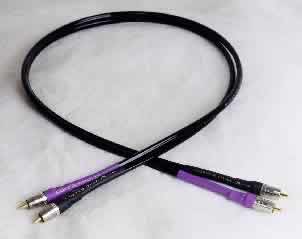 Additionally, I noticed a difference in the "attack" on stringed instruments: it became quite easy to hear the pick against a guitar string, for example, instead of just the resulting sound from the action of the string being picked.

I'm currently listening to some electric blues as I write this and noticed another thing: electric instruments seem to be "more electric" if that makes sense. I can almost picture the guitarist beside his Fender amp, jamming away. If I had to pick one word to describe these cables, I would say exciting.

Doubt set in. I had only the Oval Nines on hand for review, and this idea popped into my head and wouldn't go away. My signals were "unbunched" between the amp and the speakers, but I started to imagine a current "traffic jam" between the CD player and the amp. What about between my preamp and power amp? Yup, current mayhem. There only seemed to be one thing to do: call the guys at Analysis Plus.

My fears were validated during that call: I indeed, according to Analysis Plus, had current bunching, skin effect and other nasties still my system, so they sent two pairs of interconnects to remedy the situation.

They are well constructed, but they don't look like much. They closely resemble coax cable (the stuff that connects your TV to the wall) with very nice RCA connectors at each end. The cables are marked for current flow. (More on this in a bit). But, like specifications, I care little about cosmetics (unless truly nasty). It's the music that matters.

Upon their arrival, I installed a pair between the CD player and the preamp, and the other pair between the preamp and the power amp. (I used both solid state and tube amps for this review.) Upon firing everything up, I was initially underwhelmed. Sense of space and clarity had increased, but there seemed to be a reduction in bass response.
I parused the instructions while listening to my first CD of the evening, and there it was: I had installed the cables incorrectly. I had installed them with all arrows pointing towards the speakers; CD to preamp, preamp to power amp. Analysis Plus recommends that all of the cables point towards a central grounding point, the preamp for example.

Once I had installed the cables correctly, I was richly rewarded with fantastic sound. All of my previous remarks on the Oval Nines apply here as well. In fact, I tried the system a few different ways, with and without the Oval Nines, and if I had to select either the interconnects or the speaker cables, I would select the interconnects.
Combining the two was best, but the Copper Ovals seemed to make a greater individual improvement than the Oval Nines. The Copper Ovals did not seem to have a break in period.

I did make one fatal flaw: I didn't ask the price beforehand. Two hundred and change for interconnects? Am I nuts? I loved 'em, but at the same time found the price a bit hard to swallow. Had I known the price in advance, I probably would have passed on the interconnects. I also would have missed out on an incredible cable.

These cables reminded me of an old hi fi war-horse: a hi fi system is only as good as its weakest link. Take a few moments to ponder this. Having a great system connected without quality cables is like using cheap tires on a BMW: you aren't getting all of the performance that you have paid for.
Let me put it in more personal terms for those of you who don't appreciate BMW's: would you take a shower and put on dirty underwear afterwards? I didn't think so. But without good cables in your system, your music is wearing the sonic equivalent of that same dirty underwear.

It seems that the slick ad copy was telling the truth. I find that to be refreshing. I also found the Analysis Plus Copper Oval cables to be the best interconnect cables I have ever had the pleasure to enjoy, and most definitely worth their cost. The Oval Nines are a good value as well.