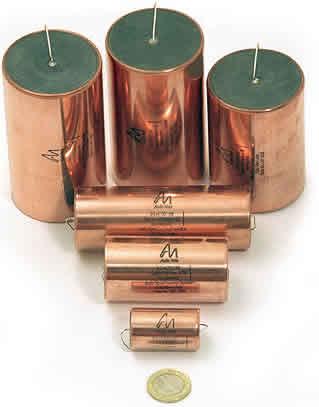 This is a long due review. The original reason was the review of other caps here on TNT. The review caused three types of reactions.

First kind of reaction, and the largest for sure, was the request for information on how to buy Auricaps. A totally uncritical attitude.

Second reaction was connected to the fact that no numbers were provided about the capacitor characteristics. Someone pointed out that there are very specific parameters to check capacitors quality. It is true, but the relationship between technical paremeters and sound is not so clear, as a matter of fact: so this too is in some extent a critical attitude based on acritical acceptation of technical data: a thing I thought had disappeared in the '80s....

Last, the correct critic of a very well known operator of customer audio, Peter Qvortrup, patron of one of the most famous British audio companies, Audio Note. Audio Note UK is currently completely independent from what was known formerly as Audio Note Japan, and now as Kondo Lab.

What Peter said was simply that I should have not taken a few examples of paper in oil capacitors as a paradigm for any paper in oil, and proposed me to test their brand new capacitors.

Audio Note had been selling for a long time paper in oil capacitors, but they were just very high quality commercial capacitors stamped with the AN brand. These new versions are instead built following Audio Note specifications.

Without entering into details, I will only say that a few weeks later a not-so-small box arrived at my home, containing two couples of these new capacitors. And here, after many months (Peter, sorry for the delay), is finally the review.

First I had to choose a set of comparable capacitor in my junk box. To make it not easy at all for our DUT, I selected the highest quality polypropilene capacitors and also another couple of recent production paper in oil as reference.

As for the previous review, for the sake of simplicity I decided to mount a selector and the capacitors under test on a Experimentor insertion board, with input and output pins so that it was possible to insert the capacitor in my current rig in series to the signal between the CD player and the pre-amp.

It is easy, fast, the units under test can be changed in seconds and all components are in absolutely the same situation. Perhaps, not a very typical use (normally a voltage difference will be applied through the capacitor, but the advantages are too many...

One of these is the possibility to compare the capacitor to a direct connection: the most difficult, I would say the absolute comparison test for a capacitor.

The capacitor arrived in a largish box (20x20x15cm), packed in plastic bags and immersed in rather compressed thin paper stripes: a bomb proof packaging!!

The appearance is quite peculiar: the outer jacket is apparently naked copper (not connected to either of the leads, but in my setup I found that touching it a 50Hz noise was produced, so be careful in avoiding any undesired contact with them...).

The capacitor are axial models with flexible, non insulated, single core silver leads coming out of each side. The sides are matt black. On the copper jacket there is a long inscription: the Audio Note trade mark, followed by the full name, the capacitance value and the maximum voltage , and the description of the type: Copper Foil Paper in Oil, Solid Silver Leads, Non-Magnetic, Audio Signal Copling Capacitor and the part number.

The description alone is enough to understand the target of these capacitors: the top end of Audio. It is really very hard to find all together such a bunch of well sounding features.

The sound characteristics a capacitors can affect, according to me, are essentially neutrality, transparency and dynamics.

The normal paper in oil capacitors I was used to (and which were also present in Audio Note catalogue, as a matter of fact...), had very good transparency and dynamics, but there was a clear preference for higher frequency that affected neutrality.

The net effect of this is a very pleasant feeling of an enhanced depthy of the soundstage, with the sensation of being able to spot the exact position of a single instrument in the background wih a lot of air around it and of being able to "walk around it".

This effect is extremely useful in many not so high quality systems in order to solve some of their tipical problems. But in a very high quality system there can be an excess of detail and depth that becomes absolutely evident and shows up as a colouration, often pleasant, but that in any case can be recognized as a lack of neutrality of the system.

Is there the same effect with these new Audio Note caps?

Not at all. As a matter of fact they are very neutral, fast, dynamic, transparent, lively. Really very similar to a stright wire. And a very good neutrality in a paper in oil is as a matter of fact a very positive surprise (for me, at least).

"So we have now a paper in oil capacitor with the same sound as a very good film capacitor", you are thinking. And yes, this is true; but there is still some difference. What I feel is also a sweetness, a lack of any minimum hint of roughness, of harshness that can be hardly found in film capacitors.

It is only a very faint difference, but it is there and you can hear it, not so clearly perhaps, but enough to appreciate it. It is as though there were a slightly better treatment of high frequencies, without any significant increase in their quantity, but with a better and more smooth and more accurate reproduction.

I repeat, it is nothing really outstanding or immediately perceivable, only a thin hint that can be detected if the rest of the system is really good enough. But this makes anyway a difference.

A further note: these are really no common paper in oil. Do not try using these capacitors in order to model, bend the sound to your taste, or in order to have a better depth or more air in the soundstage. They will not do this at all: they will just present you in the most sparkingly, transparent, correct, fast way exactly what was recorded, without adding (neither subtracting) anything. Like any good piece of wire...

These capacitors really seem to be something new, something that can really be a meeting point between paper in oil and film supporters.

The price is unfortunaltely rather high, but the overall manufacturing quality is such that it is perfectly reasonable.

Is the price correct with respect to the sound quality? From the industrial point of view, given the subjectively small difference between a very good film capacitor and these, I think that using this kind of object in a lower than top design could be not cost effective.

But if you want something really special, that can bring you a little further than usual capacitors, than these capacitors are exactly what you are looking for.

Ah, just in case the quality is not high enough for you, Audio Note has also silver foil capacitors in their catalogue: prices are absolutely extravagant, but in the end no more than the build quality....

We want to thank again Peter Qvortrup for supplying the capacitors for the review.