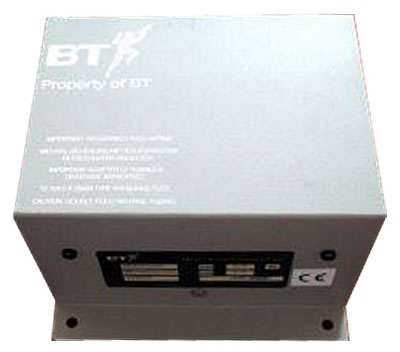 Long ago I worked in a rural location and my employers bought a new electronic internal exchange system. The server broke down every couple of days and was quickly replaced each time. Soon the manufacturer of the internal exchange system came to examine the installation. The manufacturers took the equipment away and dismantled it, establishing that the power supply had been destroyed by excess voltage from the mains supply. They then sent their expert out to examine the installation and found it to be correctly installed. The engineer asked that our organisation have the electricity supply company measure the incoming voltage over a period of days.

The electricity company sent their engineer out who installed a chart writer. After he had left the building, your old scribe examined the equipment. It was set at the slowest possible chart speed and the slowest possible pen speed. Thus every 24 hour period was (from memory) covered by a couple of cm of paper and the pen might respond to changes in voltage lasting at least several seconds. We contacted the telephone exchange manufacturers who brought their own recorder that relied on internal memory rather than paper and recorded maximum peaks and troughs of less than a half cycle duration, whenever they deviated outside the tolerance then allowed by UK mains regulations.

The electricity supplier visited weekly and demonstrated that their equipment had recorded no deviation outside permitted tolerances. The exchange manufacturer's equipment recorded regular dips below minimum voltage, of a few cycles duration, but regular spikes of over 1000V in a domestic type supply designed not to exceed 250V (now the UK supply is defined as 230V but then was 240V). There was one early morning spike every day of typically 1200V that was not recorded by the electricity supplier's equipment and which was probably responsible for the regular destruction of the internal telephone exchange power supply.
"Are we now reading 'Telephone Exchange News'?" enquire plebs, stage left, sarcastically.

The telephone exchange suppliers brought their own solution to the problem. It was a large 1:1 mains transformer and a grey box that inserted between the transformer and the electronic internal telephone exchange. On a recent visit to Colin Yallop of Chevron Audio to hear his latest computer served set up, on the floor I noticed a similar beast to the grey box of yore described above. This brought on a Proustian moment as Colin lives in the same village as the events above. Colin described how these BT (British Telecom) filters can now be bought surplus, cheaply from internet stores and at just a few pounds seemed to be worth a punt.

Colin explained how the filter had most beneficial effect for his system when inserted between mains supply and the PC he uses as a music server. At the price he'd obtained them from an online store this seemed too good to be true for the impoverished audiophile needing cleaner mains. I went online and ordered two, which appeared promptly in the mail. They duly arrived and one was clearly an earlier example than the other as it had an earlier version of the BT corporate logo. Each has a BS type 3-pin 13A plug on a captive lead at the input side and a chassis mounted 13A BS type socket for the outlet. A quick check with my capacitance/inductance meter showed them to be very similar and showing no fault conditions so they were duly plugged in and tested. Having survived this, they were tried in various audio locations, including those nowhere near the audio system.

These tests were conducted while other tests were also going on, so the variety of equipment is as diverse as it is possible to imagine. In the first test, (call it Test 1a) no changes are made anywhere else in the house; there are filters on the TV, all PCs, games consoles, ground floor digital radios and the refrigerator, even thought those are all in different rooms on other mains ring circuits from the audio system. One example of the BT filters was connected to the socket where the DIY multi socket output usually resides and a typical (good brand) commercial quality outlet strip (not a supermarket cheapie but not an audiophile jewel either) plugged in to supply the audio system. This has been chosen to be typical of what might be used with a device costing less than 30€ from ebay. It is unlikely a used 30€ filter will be hooked up to a 600€ audiophile connector block drenched in snake oil and coated with pixie dust.

Every other electrical device, apart from heating timers, solar panel controllers and clocks, are disconnected throughout the house. This will test the effect of the filter alone, not the effect Compared to the outlet strip alone, the filter, in series, is disappointing. Timing is smeared, bass definition is softenned, soundstage is flattened and narrowed. Nothing improves.

The first test location is tried a second time (call it test 1b) but with all the typical household appliances left on standby and all their local filters removed. The local filters are of various types, including DIY designs from this website, a RATA silencer, other DIY designs and good quality commercial computer protection designs. Now the balance of difference shifts. The audio system connected through the BT Mains filter is obviously superior in the several dimensions in the filtered mode. Filtered, the system is more articulate, higher frequencies are clearer, vocals stand out from the mix etc. Suddenly, other reviewers' enthusiasm for expensive audiophile filters becomes understandable. Now, rhythm barely deteriorates compared to the unfiltered condition, but is much less coherent than the condition with all household appliances off, or mains filtered, with the extension block unfiltered. Tests 1a and 1b imply that filters are better located on appliances other than the audio system, than on the system itself.

Test 2 is ONLY EXPERIMENTAL AND MUST NOT BE REPEATED BY READERS, THEIR HEIRS OR SUCCESSORS, with both the BT filters in place on the system circuit. Using a specially constructed outlet block, built from metal clad sockets with good spring tension, good conductors and self wiping contacts. The sockets lie as nodes on a ring, with two flying inlet connectors (one at each end) to connect to a double outlet on the house ring; DO NOT REPEAT THIS EXPERIEMENT IN ANY COUNTRY WITH ANY WIRING REGULATIONS OR CONVENTIONS. This is an experimental condition, suitably supervised and not legal nor safe practice; as soon as the results were in, the arrangement was dismantled. With the type 2 arrangement, the results of test 1a and test 1b were confirmed and exaggerated. With the rest of the household appliances and computers plugged in, switched on and unfiltered, the 2 filter circuit improves treble clarity, vocal separation and noise. However, rhythm deteriorates, bass definition is more softenned than Test 1a and generally the difference is Test 1b exaggerated.

Following this heuristic trail, Test 3 is the obvious next step: to use the BT mains filters on parts of the system.

The next staging post (Test 3)of the heuristic pursuit of these mains filter effects must be to try them in situations other than in series with the audio system. Trying them on appliances in other parts of the same house demonstrates a clear hierarchy. Simpler mains filers are adequate on appliances like conventional refried and freezers, traditional central heating pumps, and other electromechanical devices. Devices with switched mode power supplies (SMPS) or linear supplies on digital equipment (old PCs, old CD players) have far less detrimental effects on the sound quality of the audio system in another room when they are separated from the mains circuits by these BT mains filters. PC's and their peripherals, modern televisions with inbuilt satellite and digital decoders, games consoles, have most effect on high resolution audio systems, even when located in other rooms. Such devices have less detrimental effect on the audio system, when connected through the BT mains filter than when connected directly to the mains. In this location the BT filter has more effect than good retail quality TV mains filters and surge protectors.

The final test (Test 4) returns the house to its pre-test condition of electromechanical devices like refrigerators and heating timers connected via commercial quality or DIY filters and individual audio system components tried through the BT filters. Computers and hard drives really benefit, with no drawbacks; CD players benefit from cleaner high frequencies at the expense of rhythm, timing and bass definition, other audio components (amplifiers, pre-amps, turntable motor power supplies) are detrimentally affected by mains filters. In this respect the BT mains filter is similar to most published DIY filter designs but on a much larger scale.

The BT mains filters available on internet sale and auction sites have a definite role for audiophiles. Like every other filter this author has ever tested, they improve sound quality dramatically as long as they are connected to devices other than the audio components behind auditioned. The sole exception to this rule is the one audio component that benefits, if it alone is connected via a BT mains filter, the PC server (MacBooks too) or hard drive

The well connected audiophile will do well to by one or two of these bargains to try around the house. At this price they can be resold if they do not work, with minimal loss to the experimenter.

The BT mains filters are effective at preventing noise increase on house ring mains from the electrical items connected to it. At this money they can be recommended. Like all other mains filters your old scribe has tried, they should have no place in the audio system direct supply except to protect the rest of the system from noise pollution caused by hard drive servers and their ilk.