Not content with the success of their HDAM technology, the guys at Burson Audio continue to work hard to bring us new products that will hopefully further improve our hi-fi. Up for review this time is their Super Regulator, or rather a selection of them. I always try to avoid being too technical in my reviews (mainly to prevent myself getting way out of my depth) so for those that don't know what a regulator does, I will just say that it ensures a constant voltage supply to whatever it is feeding. Voltages can and do vary. Sometimes this doesn't matter very much but some equipment (like an opamp or DAC) is dependent on being fed a (very) steady supply.

Most electronic equipment uses the standard off-the-shelf regulators (right), commonly the LM series and these either offer a fixed output voltage, or one that can be varied to suit the particular application. Burson offer both types of fixed and variable regulator replacements (although even the fixed types allow for accurate adjustment). 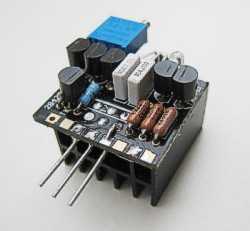 The standard regulators are cheap and cheerful and work fairly well given their cost. But they can be improved on, and there have been more than a few commercial offerings over the years. The replacements are not chips like the ones that they replace, rather they are discrete circuits and one disadvantage of this approach is the larger physical size. Burson have worked hard to keep their regulators little larger than the standard items that they replace. You can see how much work has gone into them. Despite this marvel of miniaturization, you should still check carefully to see that one of these regulators will physically fit in where you require it.

You will also see that the Super Regulators come in two power ratings and before we go further, I would like to offer a second piece of advice regarding the replacement of the standard regulators with the Burson alternative. When I fitted the first Burson regulator to my CDP, I could not get it to read a CD. After checking everything thoroughly, I was left with no alternative but to put back the original regulator. Some research with the product manual revealed that the regulator supplied not only the DAC chip, but the transport as well. Basically, there was too much current draw for the regulator to cope with. I got around that problem as I will describe below but it is better to be aware of this potential problem before you order rather than after it is fitted! So make sure that you know how much current will be drawn from the regulator and then order the appropriate model. I was contacted by one Burson regulator buyer who found that he had the same type of problem. Burson, to their credit, replaced the regulators with the higher rated type but like I say, it is best to get this issue sorted out before you order. End of lesson!

Burson kindly supplied a range of their regulators so that I could do a thorough review, rather than just try one example in one piece of equipment. I first tried a fixed five volt regulator in my Philips CD723. After realising that I couldn't use it as a straight forward replacement for the existing LM7805, I decided to fit it in addition to the existing regulator. This wasn't as hard as it may seem. There was free space on the PCB and I chose a spot not too far from the DAC chip and drilled three holes. On the underside of the PCB, I made three little 'islands' so that I could solder the Super Regulator in position. In fact, the copper track was very thin and I wouldn't have been happy relying on it to make a good connection, but as I was hard-wiring the connections to the regulator, it didn't matter too much. Having lifted the resistor that is connected between the output of the LM7805 and the DAC, I soldered a replacement resistor between the output of the Burson regulator, and one of the DAC's decoupling caps. I also added a 100 nF decoupling cap on the output pin of the Burson regulator, a diode between the adjust pin and ground, and a wire from the PSU to the input pin. I then checked everything very carefully and re-installed the PCB into the CDP. 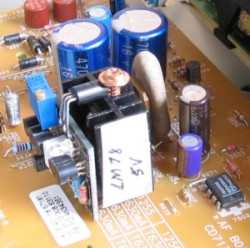 I followed the advice of my friend Leo when fitting all the Super regulators and tried them in a test circuit first, ie not connected to anything important! I also adjusted the regulators so that they put out slightly lower voltages than were required. Then, when they were fitted, I carefully adjusted them again to bring them up to the required levels. Doing it this way minimises any risk of damage to your equipment! The Burson regulators do drift slightly as they warm up so the rule is to watch them carefully for five to ten minutes, adjusting them as necessary.

Having checked that the CD723 still worked correctly, I left it playing for a few hours and then returned to audition it. I was very pleasantly surprised at how much difference the Super Regulator had made. Detail was much improved, bass was tighter, timing was better, transients were better. I noted that cymbals were "more metallic". In fact I would say that this is easily the closest the CD723 has come to sounding as good as it does when using a (separate) NOS DAC! Of course, it could be argued that fitting a separate regulator for the DAC would improve things anyway but I find it difficult to believe that a standard regulator would have made as much improvement. 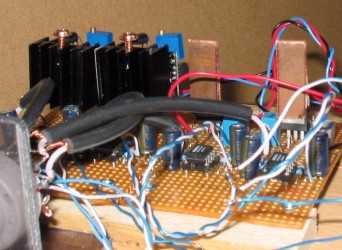 With a pair of 15 volt adjustable Burson regulators to try, I decided to build two suitable (and identical) test circuits where I could try them side-by-side with the standard regulators. I decided on a comparatively simple opamp buffer using the OPA627. Choosing to run the opamps at full voltage, the circuits that I built with the standard regulators resulted in voltage rails of +/-18.3 volts. I set the Burson regulators at the same voltage. The outputs of both buffers were connected to a four-pole switch so that I could instantly change from one to the other. I used my Philips CD723 and a stepped attenuator before the buffers, and a Charlize class-T amp feeding my IPL A2 speakers.

I was expecting big things from this set-up given the improvement that I had heard with the five volt regulator. But to be honest, I could hardly detect a difference to begin with. I decided that as both the standard regulators and Super Regulators were being fed by a supply that was already regulated by LM317/LM337 regulators, it may not be a fair test. So I took the supply from before that first stage of regulation, and fed the +/-25 volts directly into test circuits.

Now I could detect a very subtle difference. The buffer fed by the Super Regulators had tighter bass, and a very slightly more 'relaxed' sound. But I have to say that I needed to listen extremely carefully to hear the difference and was glad that I had the AB switch, and didn't need to wait between hearing each buffer.

Leo also tested a five volt Burson regulator in his Arcam CDP. He compared it with a small Audiocom super regulator (designed by John Cheadle), an LT323, and a standard ST7805, to regulate the supply for the SAA7310 (CMOS decoder). He found all regulators made a small but noticeable difference. The Burson seemed to be the best followed by the Audiocom, although the Burson got quite warm, warmer than the Audiocom. The Audiocom fitted better (physically) so he kept that one in but if there was more room he'd have kept the Burson.

Lastly, Leo tried a Burson regulator in his 1543 DAC (that's the DAC part number not the date he made it). Once again he noted an improvement, particularly with tighter bass. While the standard regulator performed best with a Black Gate N type capacitor, the Burson regulator worked optimally with a Rubycon ZL type. I mention this because once again it demonstrates that one component can be affected by another connected to it. It also explains why different people claim different results from the same components! The moral is if you are spending money on upgrades such as the Burson regulators, be aware that it is a good idea to make sure you are getting the best from them by tweaking the circuit around them! Thanks again to Leo for this good advice.

So it seems that much depends on where (and how) the regulators are used as to how much of an upgrade they will make. The Burson regulators obviously are an improvement over the standard regulators but it is difficult to say how much improvement they will make in any particular application. Leo felt that they made a bigger improvement with analogue circuits while my experience was more-or-less the opposite! This is definitely one of those products where you have to try it for yourself, but given the prices, I wouldn't let that put you off trying them. If it also encourages you to build separate power supplies for different parts of your CDP/DAC, I am fairly sure that will also bring about substantial improvements. Remember the caveats though: check that they will physically fit and make sure that they can supply the current.

That was a great review! As expected, it was an honest review. We didn't want a review saying our regulators can breath fire and kick down doors. We wanted people to have a realistic expectation but know that if used properly, the regulators can be a worthwhile upgrade. Great review all around.