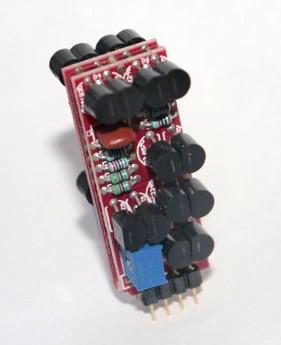 Back in May 2014 I reviewed the Sparkos Labs discrete op amps and found the experience very well worth it.

When the opportunity to review the Burson Supreme Sound op amp came along, I was keen to repeat the experience and compare the different designs.

The most obvious difference between the Burson device and that from Sparkos Labs is the size. The Supreme Sound Op Amp is made using regular components and not surface mount so they end up much taller.

The height may be an issue, as it is for me using the Maverick D2 DAC as the host. All is not lost, this may be resolved using a 35mm extension kit, so the op amps can be laid on their sides. This is a functional, if not very neat solution, the Sparkos Labs devices definitely win here.

In this case the different design decisions make for an interesting comparison. The Sparkos Labs devices design choice is for a high open loop gain of 140dB where as the Burson's choice is 95dB. This is a very significant difference, though it should have little impact on the gain in use, as that should be defined by the circuit surrounding the op amp.

The slew rate is also interestingly different with the Sparkos, delivering a +20 -12V/uS and the Burson a minimum of 35V/uS. Noise is also different at 415nV RMS for the Sparkos and 360nV RMS for the Burson, not a large difference. For me the most significant difference between the devices is the quiescent current they run at. The Sparkos draw 27.5mA, significantly more than a regular op amp (10.5mA for an OPA 2604), the Burson draw 40mA, in all cases I am comparing the dual devices.

Burson Audio also specify the distortion @ 1KHz, with a load of 600ohms and a gain of 1 at 0.004% typical, I am unable to find this information for the other devices.

The higher current of the Sparkos and Burson devices place a much higher demand on the power supply in the piece of equipment using these op amps. In the Maverick DAC I was using there are 3 op amps. The regular op amps were drawing a total of more than 30mA, with the Sparkos the total is 82.5mA and with the Bursons 120mA.

This increased demand on the power supply can cause problems. The standard regulators in the Maverick should be fine (7815 and 7915) as they are capable of delivering 1A each +15v and -15V. When I checked the supply rails there were problems as the input to the regulators was dropping below the minimum on the positive rail so causing ripple on the output.

I tried replacing the capacitors with better quality and high value types but this was not enough, the system needed a higher input voltage. I therefore changed the transformer from a +-15V AC to one of +-18V and this resolved the power supply problems.

These differences in the specifications highlight the different design decisions, there are other differences, the data sheets can be downloaded from the respective websites. What is interesting is the different impact on the sound these two devices have. 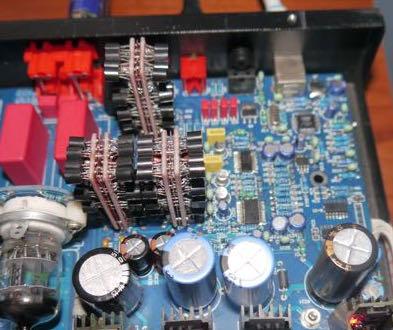 The Maverick D2 DAC with the standard OPA2604 op amps is amazingly good value for money at $250 with an open, clear a rhythmical sound. It is only when you change the op amps do you realise what the humble device is capable of.

In both cases the discrete op amps are a significant step up from the OPA 2604, giving a more detailed, and refined sound with a much improved sound stage. You will never want to use a regular op amp again after you have tried these devices.

The Burson Supreme Sound op amps deliver a wonderfully deep and rich sound. The harmonic texture seems more complete and realistic compared the the Sparkos devices. The Bursons are also much more detailed and revealing. Sometimes this can make the music sound worse as you hear the faults in the recordings.

After first installing the Bursons I was not happy, as on one album, I was hearing distortion that was not there with the other op amps. The album is Aventine from Agnes Obel and the most obvious track is Chord Left. After many emails with the team at Burson Audio and checking with a friend I realised the distortion is part of the recording.

Detail retrieval is the outstanding feature of the Burson devices and this contributes to the sound stage and tonal richness. Comparing the Maverick D2 with the upgraded power supply and Burson op amps to my regular DAC, the La Voce from "aqua acoustic quality", the differences are small, an amazing result considering the price difference.

Both computers are remote controlled from applications running on an iPad. This setup makes it easy to swap between the Burson equiped Maverick and the La Voce.

The La Voce combination gives a more analogue sound, more relaxed with less of the digital edge. Even though the La Voce is better in my environment and to my ears, I could easily live with the Burson upgraded Maverick D2. The price difference ($500 versus $2000 with I2S interface card for PC) will allow you to increase the music collection significantly, which at the end of the day is the point of the exercise.

My time with the Burson Audio Supreme Sound op amps has confirmed the findings with the Sparkos Labs devices. Replacing regular op-amps with these discrete devices gives a step up in sound.

The improvements would be hard to realise if you were to try and purchase a $500 DAC (equivalent to Maverick D2 plus Burson SS op amps). Any DAC in that price range is likely to contain more op amps.

With this sort of upgrade care must be taken. If the existing op amps are soldered directly to the printed circuit board, removing them can be tricky. If you have not done this before, seek professional help, or you are likely to damage the equipment beyond economical repair.

You also need to consider the power supply capabilities, check with Burson Audio before ordering if in doubt. Burson have a lot of experience, you can see many testimonials on their website, with pictures, and you may be able to find your device there.

Once you have taken the plunge, take your time and ensure the devices are plugged in the right way round. The time to do this right is well worth the effort and you will be rewarded with a more engaging sound with a richer tone and more detailed sound.

The resulting improvement can be spectacular, but do not expect everything to sound better. Some albums reveal their deficiencies even more, the usual culprits for me are most of the recordings from Queen or Led Zeppelin.

The music that really shines is most of the Diana Krall catalogue or The Tallis Scholars and the Allegri Miserere. You hear so much more detail, the micro dynamics are revealed in all their glory.