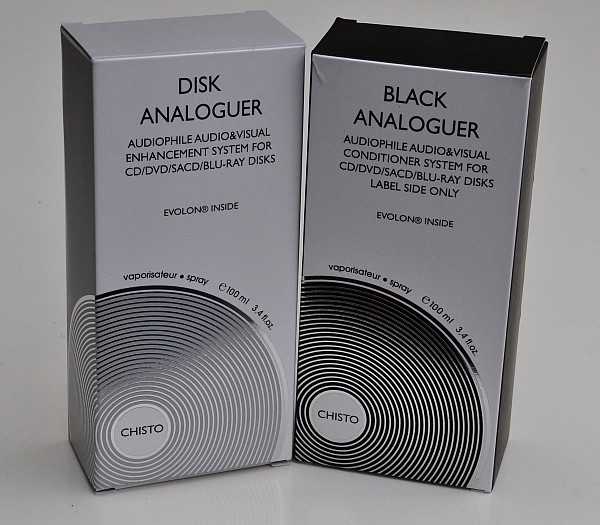 Lucio, our editor, warned us new reviewers not to start off by reviewing cables because of the difficulty of testing them and the regular flame wars about whether there are differences between cables and their value for money. Then he offered the opportunity to try a new small family of CD cleaner and enhancer products, which probably takes the reviewer into even more dangerous territory than talking about cables! In fact I had already been given a bottle of the Analoguer to try by the UK distributor, Air Audio, and had found it useful.

So, ever eager and wide eyed, I thought I'd give it a go.

There are two products in the Chisto family, the "Analoguer" and the "Black Analoguer". Chisto means "clean" in Russian and, although the manufacturer refers to the Analoguer as a "conditioner", I think its main function is to clean the CD and improve data extraction by the laser. Indeed the product website says "Yet another CD cleaning product. Yes but it works!".
The "Black Analoguer", by contrast is a treatment for the label side of a disk. This is described as an anti-static treatment.

The overall effect of the treatments, it is claimed, is to give CD presentation a more analogue sound by reducing the amount of digital intervention in recreating lost bits of data. Of course to those with old record collections like mine a more analogue sound probably means more crackles and pops - but that's not the case here.

Both products come in 100ml bottles which is enough for around 300-500 treatments, packaged with a reusable cloth.

At first I was sceptical (which is my usual starting point). I do ocassionally use a non silicone based domestic spray cleaner/polish on my CDs when the fingerprints get too much, but nothing else. I was surprised therefore when a quick spray with the Analoguer resuscitated a copy of Norah Jones' first album that I had thought was beyond redemption.

So then I started some listening tests. I found that on virtually all my CDs the spray made a difference. It seemed to enhance the detail in the soundstage, bringing out a little more depth in reverberation, a little more clarity in the separation of instruments making the overall presentation a little smoother. A couple of examples - I listened to Miles Davis' cover of the 1980's hit Time After Time.

The treatment seemed to tighten the bass and add a little more clarity to the treble, making a triangle part more audible and distinct. Then a Ry Cooder album - where the track "Down in Hollywood" seemed to gain an extra bit of funkiness as it became easier to separate out the individual instruments from a fairly chunky mix. The overall feeling of ambience in recordings seemed to be clearer.

We're not talking a night and day difference here - it is subtle - but my experience was of an improvement in the sound. The effect was consistent between the two test machines - a Shanling CDT-80 and a Cambridge Audio 640C (as transport fora DacMagic DAC).

A bit more digging around and listening suggests that much of what we think of as "digital harshness" is an artefact of over-reliance on error correction where a CD player struggles to get enough data to provide a full picture.

Chisto's web site says that chemical residues from the CD manufacturing process - specifically agents used to ease the release of the disk from the mould - mean that even new CDs are not absolutely clean. If a conditioner product improves the level of data extraction then it explains why it should give a smoother sound.

The website also claimed the products could enhance the accuracy of CD data extraction when ripping CDs. This claim was amenable to an objective test by ripping a disk once before and once after treatment then comparing the resulting files.

Ripped using EAC then compared using Audiodiffmaker, the conclusion was that there was no difference between the files - the treatment did not appear to make any difference. I then did an audio recording, straight to Cool Edit from the computer's disk drive and that did produce different files before and after. It could be that the non real time, bit perfect, nature of the EAC extraction made the treatment redundant, whereas in real time recording a treated CD gives a clearer first pass.

Most of the tests, and all of the clearly positive ones were of the Analoguer. I also tried the Black Analoguer treatment on the label side. On a couple of CDs I thought maybe it was improving the sound but I couldn't recreate it and it was so slight that it could equally have been my imagination. Plenty of people use mats on their CDs to reduce static electricity build up - this could offer a good alternative for those who prefer not to put foreign items into their machine. But it didn't work for me.

I did not do any a/b testing with other products, whether home brew or commercial, although the effect was greater than I'd noticed from previous basic cleaning products. Life is too short and you probably already know if you're the sort of person who would spend this kind of money on this type of product (and whether your system is resolving enough to tell much difference). The Analoguer worked for me and although I wouldn't bother with itfor non critical listening I would be tempted to keep a bottle to hand if I wanted to be sure I was getting the most from my little silver disks.