My first venture into the wonderful world of DIY hi-fi was building a DIY speaker, the A2 from IPL Acoustics (TNT-Audio reviewed the IPL S3-MTL2 model in 1999). These were a clear improvment on my commercial loudspeakers and were used in my system for the next few years. I tried them in several different cabinets but the biggest improvement that I made was to converting them to use active crossovers. When I discovered a pair of Goodmans 201's drivers, I moved on to full-range speakers with no crossovers, and the A2's were moved upstairs. Over the last few years, I have returned to using the A2's (in my second system for testing other equipment) but using them with their passive crossovers to test items like the class-T amplifiers. When I saw that there were some high-end crossover components available for review, I jumped at the chance to see just how much difference they could make to the A2's. 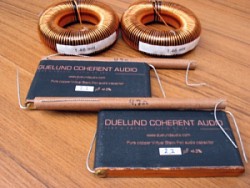 The Duelund components are made to order (by hand I believe) and it was necessary for me to ascertain the correct values of the components in my existing crossovers. The plan was to build completely new crossovers in order to be able to carry out an AB test between them and the existing crossovers. Fortunately, I have always used external crossovers for the A2's as something instinctively tells me that putting them inside loudspeaker cabinets can't be a good idea! Apart from any sonic advantage, external crossovers are obviously much easier to access. And in the case of this review, it made swapping between standard, and upgraded crossovers, much faster.

The values of the resistor and capacitor were clearly marked but not the inductors and I had no means of measuring them. So I removed them and sent them off to IPL where Ivan Leslie kindly measured them for me. I was then able to order the parts that I needed from Duelund.

After a couple of weeks I received a box from Duelund containing the large inductors, resistors and capacitors. I had already obtained the smaller air-core inductors that are used in the treble section of the crossovers because Duelund do not offer such a low value. The Duelund components certainly look the part, in fact it seems a shame to hide them away! The inductors are huge compared to my existing items, the resistors look very cool in their slim cardboard tubes and the capacitors... well it was coming up to Christmas and I couldn't help thinking how much like an expensive bar of chocolate they looked (Duelund did advise me not to eat them though). 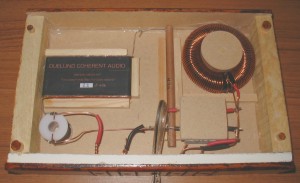 Duelund also recommend using external crossovers and using non-metallic enclosures, something that I was already doing. I set to work building a couple of wooden/MDF boxes, slightly larger than my existing crossover enclosures as the Duelund components were all larger. Following the advice to the letter, I didn't even use binding posts, preferring instead to my make own connectors that connect the banana plugs directly to a piece of copper wire that is attached directly to the crossover circuit. If this job had been for my own amusement, I would probably have left the boxes as they were, but this is TNT so I spent a little time on making the boxes look (hopefully) as good as the components.

Having doubled checked my work to make quite sure that the circuit was identical to the original crossovers, I connected the new crossovers to the test system. In this case, I was using a Philips CD723, Monica2 DAC, valve pre-amp and Charlize amplifier. I'm not sure if these passive crossovers require a 'burn-in' period but in my experience, the soldered joints need some time to settle down, so I left the system playing for about 10 hours before doing any serious listening. 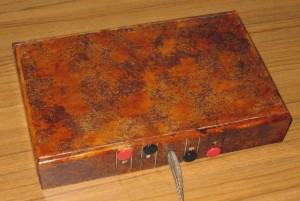 In fact, the first part of my audition involved removing the Duelund crossovers from the system and putting back the original items to make quite sure that I 'knew' their sound. I played a couple of my test CD's and then switched back to the Duelund crossovers. The difference in sound quality was immediatley apparent. I had never thought of my A2's as being edgy but they now they sounded noticeably smoother. This was most apparent in female vocals and violins but also in the portrayal of percussion instruments like cymbals and triangles. 'Cleaner' is how I would describe the change from the original crossovers. Bass was also very slightly better quality with the Duelund crossovers, not deeper but more tuneful.

Once more, I switched back to the original crossovers and all my observations were confirmed. It's strange how you can listen to something for so many years and then make a change that highlights characteristics that you have not noticed before! It didn't take me very long to put the Duelund crossovers back in and that's where they have stayed. I have now got quite used to the improved sound and the Duelund components have slightly tempered my evangelism for active, rather than passive crossovers (no mean achievement).

Now then we arrive at the nitty-gritty bit! The Duelund components are classy items and will almost certainly improve the sound of most loudspeakers using passive crossovers. But they do come with quite a hefty price tag! So, I can hear you all asking - "is it worth it"? Well, bang for buck, this isn't the biggest improvement that I have ever made to a hi-fi system. But it's a well-known fact that upgrading hi-fi eventually leads us to the law of diminishing returns. And as we approach the latter part of our search for the Holy Grail of hi-fi, the improvements get smaller while their cost goes up. I suggest that the Duelund crossover components fall into the category of upgrade that comes later rather than sooner, but at some stage, if you are using passive crossovers, you owe it to your speakers to give them the best crossovers that you can afford, and from my experience doing this review, the Duelund components should be given careful consideration.

It should also go without saying that the size of improvement achieved with components of this quality will depend much on the quality of the loudspeaker that they are used with. Likewise, it may seem a less attractive upgrade to spend this sort of money on crossover components if your speakers didn't cost very much in the first place! Another factor in deciding whether or not this sort of upgrade is for you, will be the number of components in your crossovers. If you are lucky enough to have a minimal crossover (a single capacitor on the tweeter is not uncommon), as is the case with many more recent designs of loudspeaker, then buying say a couple of Duelund capacitors will be a very good (and cost-effective) upgrade! Even if you have more complex crossovers, the Duelund components still offer you a significant improvement, albeit at a higher cost.