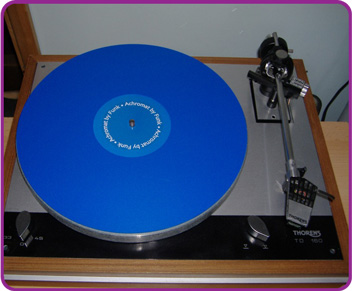 One of the joys of vinyl is that it appeals to those who like to fiddle about with their hi-fi to get the best sound. Anyone who has a long term interest in the medium will be well aware how changes in position of the turntable, arm adjustments, suspension adjustment and the like have quite major effects on the sound produced.

One of the areas most "tweaked" in this way is the interface between that black disc and the platter it sits on. Most turntables come with a mat of some kind, felt, rubber, cork or whatever and of course this can be removed and swapped easily. The temptation is to try every flat piece of material available to the addicted, cut a 12" disc and punch a hole in the middle - each will sound different, often to an alarming degree, but providing you don't use something that actually damages the turntable and record you'll be doing no harm and by chance or design you may even improve the sound.

When a stylus tracks a record it does some pretty spectacular gymnastics to follow the groove and in the process generates a lot of vibrational energy. In a perfect world all this energy would go up the cantilever and drive the generator of the cartridge to produce music. Unfortunately we live in the real world and so a lot of this energy goes instead into the record itself. This energy then spreads around the disc, bouncing and shaking and generally being naughty before eventually returning to the stylus. This energy will be very distorted echoes of the original signal and the stylus will pick them up and add them to the music signal it is trying to reproduce. Not good. Imagine a pebble thrown into a small circular pond. Lots of nice concentric waves, which then hit the bank, reflect and return as a confused mass to the point where the stone entered the water - the record is the same.

The other problem is that the stylus is not the only source of vibrations. Unfortunately the vibrations produced by the platter and the motor system will inevitably find their way to the stylus. The better your turntable the less this effect, as both motors and bearings should be quieter (it's one of the things you pay for) but there will be some effect. Other vibrations may also get into the record from outside sources, their quantity being again determined by the quality of the turntable and how good it is at stopping vibrations from the surroundings getting to the disc. Lastly at higher volumes, and if the turntable is near the speakers, the vibrations in the air can have a major effect on the record, its flat thin construction being ideal for capturing such radiation.

So the interface between the record and the platter is fundamental to the sound quality of a turntable system. A perfect turntable mat would offer a ready path for vibrations to escape from the vinyl so that fewer return to the stylus, and at the same time stop vibrations from the platter itself from passing into the disc.

This problem has been addressed by many different types of mat. Soft sorbothane type mats are good at the damping idea but have the major disadvantage of not holding the record still. In my experience such mats produce a dead, slugged sound lacking in fine detail. On a turntable with a resonant platter and poor motor/bearing the barrier to these vibrations might be beneficial, but then it would probably be just as cheap to buy a better budget turntable!

Some solutions, such as the point support of an old Michells, or mats like the ringmat, only support small portions of the vinyl and appear to work by isolating the disc from the platter whilst relying on carefully positioned support to allow the vinyl to damp internal vibrations and/or convert them to resonances that are less harmful to the music signal. The ringmat for one was particularly successful on the LP12 I owned.

Other mats try to mimic the characteristics of the vinyl itself, so that vibrations in the record more easily pass into the mat. At every junction between materials a large proportion of vibrations will not "jump" the gap but are reflected back from whence they came. The more similar the two materials on either side of the gap the greater the proportion of vibrations that will cross the gap. Then by virtue of its greater volume the mat is better able to damp the vibrations. In fact turntables with large acrylic platters work using this principle.

The Achromat comes into the last category. It is a 5mm thick disc with a machined well for the record label. And here an important point. Most aftermarket mats are ugly, they look like afterthoughts, many look simply home-made, and they rarely match the look of the turntable. The Achromat bucks the trend. Mine was a rather bright blue (other colours are available) and even placing it on a 5000 Euro table it looked the part, as if it were part of the original design. It is beautifully made, the centre hole is in the centre (rare this!) and once fitted it can be forgotten as it doesn't lift off when you remove the record or cause any other problems. It can be used either with the label well, or turned over as a flat mat, this important especially if you use some form of clamping system.

The structure of the Achromat is unique in that it is made of a foamed vinyl/acrylic material with a hard, smooth sealed surface on both sides. In this case the idea is that with a similar material to vinyl any vibrations will pass easily from the record, here the larger volume and the damping qualities of the foam will help the vinyl lose those bad vibes... The fact that the mat is made of foam makes it much lighter than you'd expect, so unlike thick acrylic or sorbothane mats it shouldn't have major effects on suspended turntables.

In use and sound.

The Achromat is 5mm thick so you need to be able to change AHA (Arm Height Adjustment) in order to compensate. Owners of turntables with felt mats such as Regas can get a 3 mm thick mat which is a straight swap with any felt mat, but the thinner mat will be less effective.

I tried the mat on three totally different turntables. First an old Thorens TD 160S with Rega arm, an Acoustic solid and my own Opera LP 5.0.

Here the turntable has an undamped aluminium platter topped by a thick (5mm) rubber mat. The effect of the Achromat was wholly positive. Fine details were more apparent, there was more feeling of space and air around instruments and bass performance tightened noticeably. In many ways it reminded me of the Ringmat, except it looked better and is obviously pretty indestructible (you can wash it in the sink!). I have to say that here it was a major success and as the configuration of the Thorens is shared by many other turntables - Linn, AR, Ariston etc I'd expect its effect to equally positive in these (as was the Ringmat).

The Acoustic Solid has a massive lead/alloy platter about 20 kgs in weight. Despite this tapping the platter gives a very lively "ting!". Obviously this is not a candidate for a record going direct onto a platter - the massive platter would simply reflect vibrations back into the vinyl whilst at the same time passing on the ringing it suffered from. Of course the manufacturers are aware of this and the platter is normally topped by two mats, a 5 mm thick sheet of clear perspex and a very sexy looking leather mat. The manufacturer advises playing with different combinations of mat and in my case I've settled for the leather under the disc and then the perspex below this. I surmise that this combination does the best job of draining vibrations from the vinyl whilst isolation it from the platter. And here let me say that the result is one of the finest sounds I've even had from vinyl...

Replacing both mats with the Achromat was interesting, the sound seemed to lose a little heft in return for a slightly lighter faster presentation. The leather sounded '"darker" the Achromat more precise but with a little less atmosphere. After a month of swapping I'm still not sure which I prefer! The Achromat is more practical in my dusty house because I can just whip it off and clean it in the sink, so it gets my vote by a small margin, but its tuning effect may well be more worthwhile in an unbalanced system lacking speed.

This gets difficult. The Opera has a massive lump of acrylic platter over 50mm thick. It's obviously designed to be a direct drain from the disc to the platter and has no mat. Adding the Achromat and correcting for height didn't seem to make much difference, certainly nothing that I would consider spending money on. Here note that I preferred the sound of the Acoustic Solid.

Putting a £50 add-on turntable mat onto a couple of high-end turntables may not be the market the designer was originally aiming at, but the results were worthwhile. In my opinion what the Achromat manages to do is give many of the attributes of a big acrylic platter to a turntable sporting a classic alloy platter. Several companies offer replacement platters for such decks at some expense, and I would suggest that the Achromat makes more sense as it seems to do much the same job for much less money and hassle. Inevitably on a turntable already equipped with such an acrylic platter the effect is much less, though the ability to remove and wash it would still make it worth considering in systems used in dusty/smoky rooms. How much change/improvement it gives will also depend, as always, on the complex interaction within the entire record playing system. For example in a badly sited turntable the mat may reduce feedback and thus result in a major upgrade whereas the same turntable in a different position might show marginal changes.

So the advice, as so often with vinyl, is "suck-it-and-see". It's not expensive, is very easy to use and practical. It looks good and in no case did it significantly reduce fidelity, in several an improvement was obvious. The best bit though is that you have 30 days to try it - if you hate it send it back. If only all companies worked like that, certainly takes the heat off me!