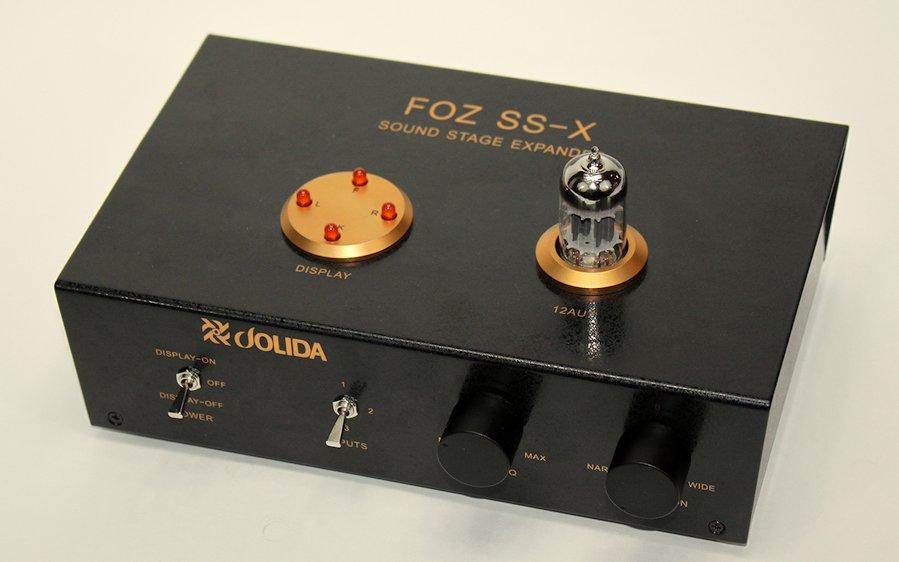 The label on the sturdy, if somewhat utilitarian, metal case is Sound Stage Expander, but there is more to this unit than first evident. As well as being a tube buffer, it provides two effects - soundstage dimension adjustment (narrow to wide), and bass equalisation (min to max). Make no mistake, though, this audio sound processor is not a mere tone control or mono-stereo switch.

The incorporated circuits are certainly tried and tested. Originally the bass boost equaliser was incorporated into Jim Fosgate's Fosgate Signature tube headphone amplifier. It was designed to give headphone listeners defined low frequency bass impact without bass boom. This circuit has been used in different forms in many products including Rockford Fosgate Car amplifiers. Famed designer Jim Fosgate patented it in the USA in 1975. For that purpose, it was called a “Single Element Controlled Twin-T Filter”. It has a much steeper curve than a bass or loudness control, and changes frequency and amplitude (i.e. boost) with a single control. When the control is set in the min position, the boost is applied at a lower frequency than when the control is set to the max position. The bass equalizer circuit is designed to increase low bass impact by up to 9dB without bass boom. Conversely, in the event of boomy bass, the bass equalizer can reduce the boom by up to 9 dB.

Jim Fosgate also patented (in 1994) his “Panorama Control” or dimensionality control which infuses audio sound with a natural sound stage. Part of his renowned surround processors, this circuit cross feeds signals between the channels, so each channel has a signal from the other which is out of phase, to create a sense of depth and space, and this moves the dimensional sound stage outside of your head when using headphones, and beyond the speakers when not.

Negative feedback is applied around this stage in a single loop. There is only one coupling capacitor per channel in the signal path, and it is enclosed within the feedback loop, thus capacitor colorations are eliminated. Separate, oversized storage capacitors are used on each channel to provide a rock solid supply voltage without voltage regulators to affect the signal. The circuit is configured so that audio signals from the one channel cannot couple to the other, preserving soundstage width and depth. The audio signal passes through the single vacuum tube valve which buffers and cleans the signal.

This unit can also be used to test the phase of a recording and also can test to see if your system is in or out of phase. The logic display on the top of the SS-X gives you visual confirmation of your system phasing using a configuration of four orange LEDs.

Did I mention that it also allows switched connection of up to three inputs to the output?

Jim Fosgate is the epitome of an inventor, and no stranger to TNT-Audio. He designed the first amplifier for use in a car. He also invented surround sound for television, Dolby Pro Logic, and high-end matrix stereo quadraphonic (SQ) 4-2-4 analog audio decoding.

The 2.1 kg unit is a solid coated 230 x 150 x 70 mm metal box, sporting the LED array and valve socket on top. On the front panel the mains power switch also switches the display. There's a three-way input switch, and rotary controls for the “bass EQ” and “dimension”. The rear panel has gold-plated phono input and output sockets and the power cable socket. The unit is supplied with a new Tung-Sol 12AU7W electron tube, and a printed owner's manual. A one year warranty on the unit is complemented by a six month warranty on the valve.

Addition to my system was quick and simple. I connected source(s) to the input(s) and the output to my preamplifier. Power on with or without display.

I began with only the dimension effect, set to wide - this became the default setting for me, as it has enlarged the sound stage in my listening room in a wholly pleasing way, making all my listening more engaging and exciting.

Having wowed myself with the sound stage expansion, I then reset the dimension control to the midpoint, and engaged the bass EQ at max. Immediately it was clearly not merely making the bass louder as would a normal graphic equaliser. I also listened with the min. setting and found that the bass was reduced without obvious tonal change. Crucially, in both cases, it wasn't tone that was changed; it was the weight of the bass. This was most clearly demonstrated in playing a couple of my go-to tests for dynamics: Charly Antolini's fiery drumming, and Dennis Chambers' sophisticated drumming on the Dean Brown album DBII: Live at The Cotton Club. Crisp and clearly distinctive skin, wood, and metal, with light subtle tickling all the way to explosive battering. This live recording is fantastically well recorded, with huge dynamics and intimacy.

Once I was certain what the effects were doing with my cherished music playback, I engaged both max bass EQ and wide dimension. That has been the default setting for several months now, and occasionally I return the controls to “neutral” as a check. But sure enough, the full effects do wonders for the dynamic range, heft, and realistic presence that is crucial to my listening pleasure, and there they will stay.

For those who are inclined, you can experiment with valve brands that sound different. I was able to try a range including Thorn Brimar, RCA, Röhre, Telefunken, and Philips Miniwatt, and I prefer the warmth of an old Mullard long plate.

JoLida are expert in products that deliver the euphonic sound of music rendered through vacuum tubes. It has a more natural sound character in terms of timbre, for example, explained in part by the even order harmonic distortion present that is heard as “warmth” in instruments and soundstage ambience. This unit continues that line of valve-based products. 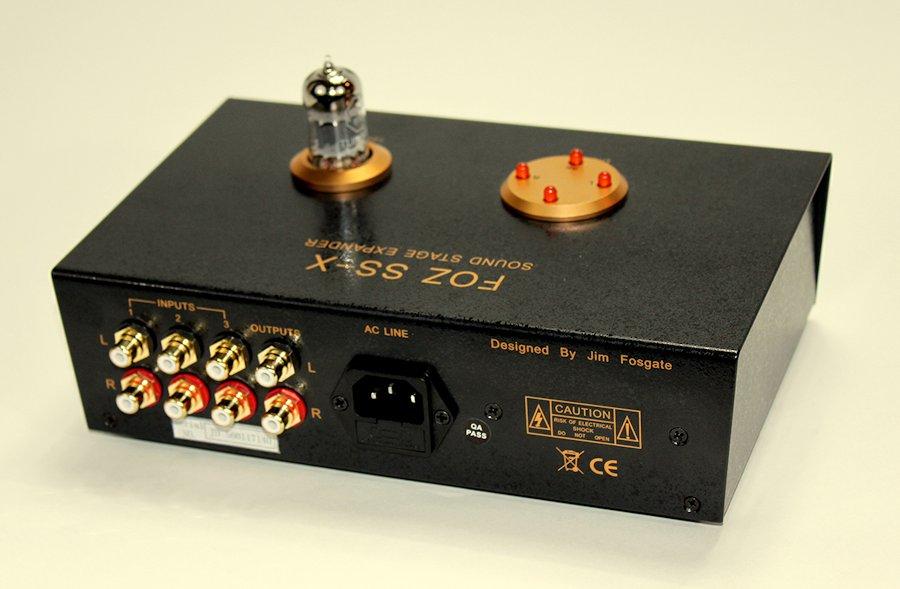 There is no doubt that an effect is created. This isn't one of those products that introduces a (questionably) subtle enhancement. It's not one of those products that you fret over for hours, days, and weeks, trying to convince yourself that it really does make the music sound better, and that you got a good enough buy for your hi-fi Dollar. The questions are really only “do you like it?” and “how much effect is to be applied in my system?” Perhaps not everyone will find it appealing, but there's no doubt that it's highly effective, and oh so easy to add to a system. For that reason this has to be considered both strongly worthwhile and great value for money. Add the Foz SS-X and make your system's presentation very obviously better. Recommended!

I can't say that this unit is really aesthetically pleasing in appearance, indeed it's modest and utilitarian. But, it conjures up the slogan in the long-running advertisement for Ronseal wood preservative stain, it does what it says on the tin. It does it very effectively, and that makes it remarkable value for money as a system upgrade.