The Miracle of the Low Cost Transport 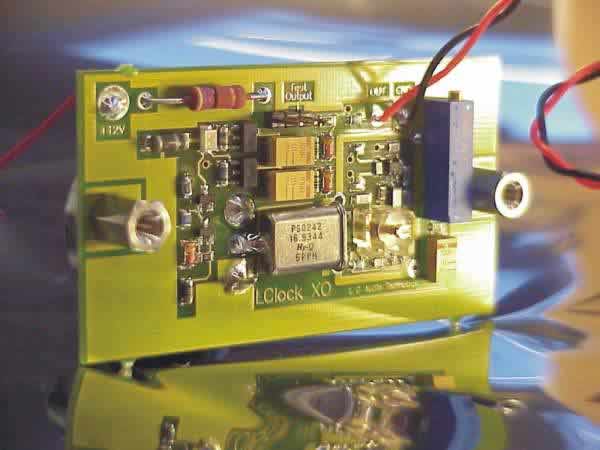 L C Audio is a Danish company with a large range of audio products, which are especially well known for their products related to CDs. These include a couple of CD players, one completely designed by the company (ZAP Player) and the other based on a well known commercial product (Rotel RCD-971) with some tweaking applied.

All the tweaks applied to the 971 are available to buy separately. They are essentially the LClock XO tested in this review, the ZAPfilter - a high quality output stage for CD players which doesn't use op-amps, and several modules designed to easily subtitute the normal quality operational amplifier chips present in CD players: these modules use very high quality, surface mount AD825 op amps, but their pinout matches the regular 8 pin dual in line footprint of normal op amps.

The LClock XO (XO stands for Crystal Oscillator) is a very high quality clock, with a crystal precision of 2ppm (parts per million) and an output jitter less than 2psec.

It is often said that a great improvement in overall sound quality can be achieved by substituting the low quality clocks present in all the commercial CD players (except perhaps only the very high end ones). This test aimed to understand to which extent this is true with LClock.

Not much information is available about the circuit. All components are also SMD, so that makes it impossible to understand their values. The only information available is that they used transistors with ultra high bandwidth (gigahertz) to obtain very fast and clean clock transitions.

The LClock and dedicated power supply arrived in a rather large box; the parts themselves are small, so the packaging is really safe and foolproof. 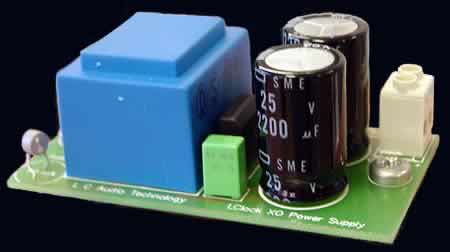 I had asked for a 16MHz clock: the exact frequency for a real lot of CD players is listed on LC Audio site, and you can find there the mounting instructions specific for each of these players: very detailed and with photos where no component identification number is present on the board. Precise and impressive.

Even if your player isn't listed, given the fact that most of the CD players are using the same kind of clock, the general instructions could be enough. If in doubt, get in contact with LC Audio for assistance.

The job, in case the dedicated power supply is used, is just as follows:

Total time? A couple of hours, taking into account the delicate phase of opening the player, understanding where and how to mount the clock and the dismounting of the board.

As a matter of fact the sound changed dramatically.

I tested the LClock on Pioneer PD-S505... the unit had previously been modified by adding an electrical S/PDIF buffered output. For a good description of its sound you can just read the PD-S507 review: they seem to be very similar. On other topics, anyway, I definitely cannot agree with Dejan: the transport does not feel cheap. The supporting plate seems stable enough, even though rather lightweight, and the laser seems to be mounted on a metal plate suspended via elastic elements to the rest of the (plastic) transport. I have hardly ever seen such details in other transports of the same cost!

Ok, I admit it... it is possible that I really appreciate the Pioneer because I have found a used unit in mint condition for 120USD... this can really make everything look better. But the sound is excessively brilliant (if not edgy), and it is "hesitating" as in most low cost players: something I assimilate to wow and flutter of old compact cassettes, but faster and with a different character.

Well, after installing the LClock XO, the sonic imprint didn't change much: the sound remained brilliant, and voices cried out more than necessary.

But at the same time the sound became stable, rounded, self assured, robust. Even more than Mimik's one, just to make a comparison: and Mimik price was five times the Pioneer's at the time.

So I decided to make a more balanced comparison, testing both units as transport and connecting them to the same Convertus.

I had made some comparison tests before adding the LClock to the Pioneer, and the result was that I largely preferred the Mimik+Convertus sound: apart the "uncertain" or "hesitating" character of the sound, the PD-S505+Convertus still sounded unnaturally brilliant even through the Convertus, which was really strange, given the quiet nature of this last unit.

After the treatment, in the beginning things did not appear so different. The sound from the PD-S505+LClockXO+Convertus was now really stable and solid - as stable and solid as the Mimik+Convertus one, or even slightly better, but the sound still seemed to me strangely, abnormally brilliant.

So I returned to vinyl for a while. And while listening to vinyl I started thinking over that comparison session, until I realized that a major difference between vinyl and CD is that the sound of vinyl is much more lively and pure, transparent in high frequencies than of the CD, and that in the end perhaps the PD-S505+LClockXO+Convertus was not so wrong in its presentation. I was just not so used to it.

In the end, I began another set of comparison sessions, in which I realised that the Mimik+Convertus was producing only noise and confusion in the high frequencies, compared to the detail that the PD-S505+LClockXO+Convertus was able to manage. Also, the slightly more present bass of the former was just added boom and bloom, while the bass of the latter was a little more tight, dry and detailed. The greatest difference was in apparent speed and pace: this was really very different, PD-S505+LClockXO+Convertus being incomparably faster.

Note that this comparison test is rather aseptic, and does not fully leverage the clock improvement achieved by LClock: as a matter of fact the highly pure clock generated from LClock is somewhat deteriorated by transferring the data retrieved by the transport to a DAC through any standard S/PDIF electric interface, like the one I used. Moreover at the DAC side the clock is retrieved from the transferred data through a PLL included in the digital receiver (CS8412, in the case of Convertus).

Nevertheless the improvement of the sound even under these conditions has been really great! Probably this is due to the fact that, even though the jitter of the clock retrieved by the CS8412 is said to be less than 200psec, it largely depends on the input clock jitter, especially for what it regards as low frequency jitter, that goes through the PLL with little attenuation.

Oooops... am I getting a little too technical? Well then, just let's say that the better clock makes the sound better even using an external DAC, and that there are good technical reasons for this to happen.

The only real problem was that my specific instructions were wrong (the capacitor numbers were mispelled). I asked Fabio Camorani for assistance, and received the answer the following day. A very good performance, I would say. Take also into account that the general instruction made the point clear, and I just checked with Fabio just to try the way a normal user would have gone.

For the rest, everything worked fine and without any problem.

Only one more complaint: the price is in absolute not really low, it costs more than a budget CD Player. But even taken into account the fact that the LClock XO cannot improve the analog stages, the improvement just related to the transport is probably worth the expense, if you think about the price of a commercial transport with similar characteristics.

One thing that you must have clear in your mind is that the modification in some cases (surface mounted devices, in particular) can be very difficult to eliminate: so it should be considered a one way mod. 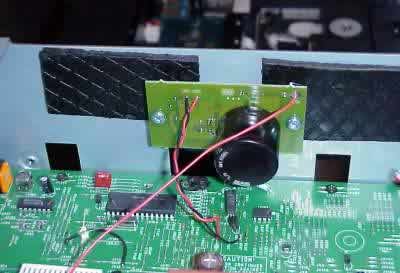 The LClock works fine and is easy enough to set up. It really does everything it is said to do: tighter bass, improved pace, smoother presentation of sounds, cleaner high frequencies. The cost is not low, but the improvements are really notable.

You also must absolutely take into account that it will make your CD player sound better, but will not make it a new one: its basic character and colour will remain exactly the same. Hence if you do not like it, it is not worth spending the money.

But if you like the overall character of your CD player, and want to increase its qualities, than this is a very simple and even rather inexpensive way to make it far better, compared with substituting it.