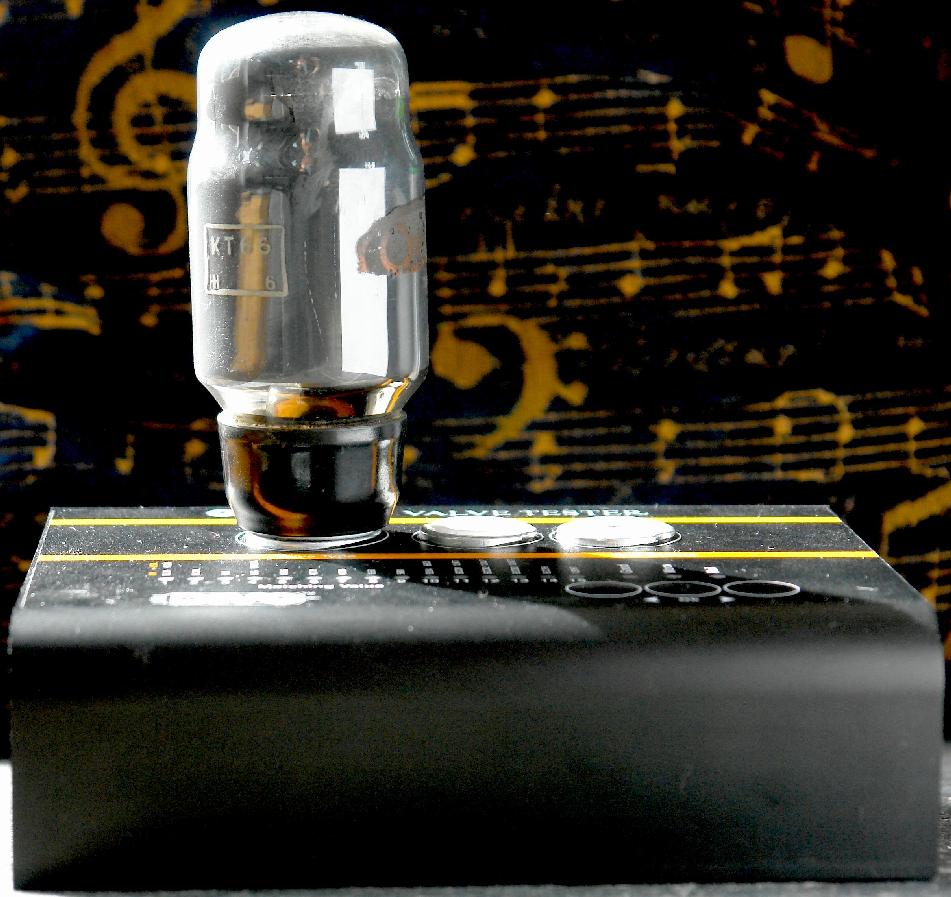 Orange, maker of those distinctive valve heads and speaker cabs, have introduced a clever valve (tube) field tester that can be operated by anyone capable of safely unplugging a valve and plugging it into the test box. Like their orange tolex covered guitar amps, the DIVO VT1000 is partly finished in distinctive orange on the base and sides that you cannot see in the pictures nor during use.

It is designed to be a plug'n'play device, performing a full test sequence in a claimed 2 minutes. I do not know which valve type they were testing to achieve that speed. In approximately two minutes, the VT1000 performs an extensive series of tests including:

Before starting the test, the operator must connect the power supply to the unit; the high current low voltage feed will provoke a slight arc on the coaxial socket so connect everything before switching the wall socket on. Use the OK switch to activate the unit and the left/right toggles to select the valve type. Press OK and watch it performing the above sequence.

The Orange DIVO VT1000 uses an extension of their clever TubeSync valve-monitoring technology that's found in its DIVO OV4 amp management tool, to be designed as a one-box go-anywhere solution to field testing the valve types typically found in guitar, bass and keyboard amplification. If it works, at this price, every studio and stage tech should have one, if it really does field test all the valve types encountered in everything from and old Vox AC30 to the latest Orange AD30HTC.

"The old scribe's writing for Roadie Monthly already; what use is this to audiophiles?" suggest plebs, stage left.

The Orange DIVO VT1000 valve tester answers both these criticisms, which is why it could be a better bet for bottlehead audiophiles. It has an Octal socket and algorithms for numerous power valves (especially the tetrodes and pentodes found in guitar amps) and a pair of B9a sockets for miniature power valves (EL84) and pre-amp double triodes. It lacks the base for one of the most popular audiophile valves, the 300B power triode even though it includes a test sequence for the modern ECC99 that is popular as a 300B driver and as an audiophile pre-amp output valve.

It also (despite your old scribe's attempts to find a workaround) does not test the octal equivalents of B9a valves that can be tested by the Orange DIVO VT1000 valve tester. This means it simply shows them as 'fail' without doing any harm as the tester sequence does not recognise the type when the test sequence is initiated. Many audiophiles prefer the lower crosstalk between the two triode sections of double triodes on Octal bases than B9a types, despite their reputed higher microphony. The very linear and hence very popular 6SN7 cannot be tested, nor can the lush 6SL7 be tested.

Orange claim, "Commercial valve testers have been available, almost since valves were invented, incorporating many excellent techniques and designs over the years. However' the vast majority have a number of common features, which we considered to be a barrier to the modern valve user namely:

"In a lot of cases previously available valve testers are not very portable and require correct mains voltage."

The Tube Imp, previously tested on TNT-audio.com, also overcomes those criticisms, but by virtue of being dedicated only to miniature double triodes is limited in application.

Orange continue, "When developing the VT1000 we decided to break the mould to produce a fully automatic valve tester, which performs a wide range of tests quickly and accurately.
It requires no user interaction other than inserting the valve to be tested into the correct socket, selecting the type from a list using two up/down buttons using an LED bar display, then finally pressing a 'START' button. The test then proceeds without any further input and an elapsed time is displayed on the bar graph display during the test, when one of three LED's is lit to indicate a 'PASS', 'WORN' or 'FAIL' condition. 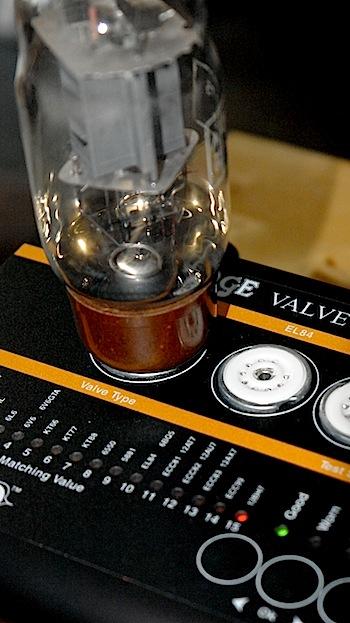 "In addition, the LED bar-graph display indicates a 'matching number' which is based on a summation of the many results obtained during the test and has been specifically designed to reflect the operation of the valve, according to its normal function in an audio amplifier. For example, power valves are graded with their emission and control grid performance as primary factors, whereas pre-amp valves are graded with different parameters to reflect their role in signal amplification and phase splitting applications. If the valve is faulty or worn, then this will be indicated at the end of the test.

"The simplicity of operation belies what is going on 'inside the box', where a sophisticated microprocessor controlled testing system is in operation' allowing full control over all inter-electrode switching and measurement operations. In addition all voltages required by the tester are internally derived, stabilized and controlled by the microcontroller, allowing us to perform static and transient tests rapidly and without generating unnecessary heat. The test algorithms used have been developed using data from tests on hundreds of new, used and faulty valves."

"In addition to the 'standard' range of tests, which include internal short circuits and open circuit heater, the VT1000 also performs inter electrode leakage measurements and tests for correct anode, cathode, screen (for Pentodes & Beam Tetrodes) and heater current values for each type of valve selected. Valves are extremely complex devices and attempts to categorize them using just one or two measured parameters are often unsuccessful in 'real' applications, such as audio amplifiers. The measurements made by the VT1000 throughout the entire test procedure are finally processed using a sophisticated software algorithm in order to report any existing problems and, in some cases, preempt future fault conditions. In a similar way, the 'matching number' indicated by the LED(s) at the end of the test' is based on a combination of measured parameters to give an indication of how the valve will perform, according to its typical function in an amplifier."

What the Orange DIVO VT1000 valve tester cannot do

The biggest criticism for audiophiles or users of some vintage North American instrument amplifiers, PA amplifiers or theatre amplifiers, is a whole class of valves is physically excluded while the VT1000 does have the electrical capability to test them. Of course, these are the octal base small signal valve. Arguably the most linear pre-amp valve is the 6SN7 double triode (and the far Eastern designated, virtually identical 6N8S that do appear as OEM in instrument amps) which are blessed with less crosstalk between its two triodes than the electrically quite similar ECC82 or even closer 6CG7 (as used by Doug Dunlop in some examples of his Concordant Excelsior). The ultra lush 6SL7 belongs in guitar amps for its rich tone but somehow has never made it. So just like the Tube Imp valve tester that was tested by TNT-audio, the Orange DIVO VT1000 is not quite the answer to all the tube tech's prayers.

The b9a ECC88 and it's pretentious cousins, the E88CC, CV5358 and 6922 (long life version), found in Audio Research, Conrad Johnson et al cannot be tested, even though the modern unofficial ECC99 driver can be tested. Spend more and sacrifice convenience if you need this versatility, start your search here. There are some increasingly popular Chinese types popping up in modern circuits, the 6H30 being one that the VT1000 could not be tricked into testing by failing to set any specific valve type immediately after switch on.

However, as noted above, the Orange DIVO VT1000 will test any valve it is designed for, even if no type has been selected. However, if the wrong type has been selected, as will typically happen as one works back from the output stage, through the drivers to the input tubes while fault finding under pressure, the tester will show a good valve as "FAIL" because it failed to be the type selected.


"We don't buy things for what they cannot do, so what can the Orange DIVO VT1000 valve tester do?" demand plebs, stage left.

What the Orange DIVO VT1000 valve tester can do

Your old scribe threw the Orange DIVO VT1000 a curved ball with a 6550 that previously took ages with conventional testing to identify a fault. Only when plate voltage was over 100V did it suddenly draw excessive current, overheating B+ resistors in amplifiers. The VT1000 conducted the tests and near the end of the sequence identified 'FAIL' as it applied increasing real world voltages. many 'quick' testers only apply low voltages and show vales as good that have this kind of problem.

Of course, there are more sophisticated and comprehensive bench testers like the Amltritex AT1000 at $2650 to cover those other valves, the fiddly Heathkit IT-21 (good for those 4 pin DHT's) and rivals like the octal MaxiMatcher and b9a MaziPreampII, which also apply plate voltages up to 400V but cost considerably more. The established Hickok 600, 6000, and 53's test a lower voltages so will not always stimulate output valve arcing that could happen in the amp.

The point of the Orange DIVO VT1000 valve tester is that it tests the valves in real world conditions at specified anode voltages. It is simple to operate to check whether a valve is working within accepted tolerances and provides a matching number so that you can sort your valves into the closest match available before putting the lid back on your Orange guitar amplifier, or your vintage audiophile amplifier. Unless you need to test directly heated triodes, ECC88/6922 or Octal triodes, the Orange DIVO VT1000 answers more prayers than the Tube Imp. For a stage tech roadie or guitar tech this will become as essential a tool as a multimeter.

The full range of operational procedures and tests can be read in the Orange DIVO VT1000manual.