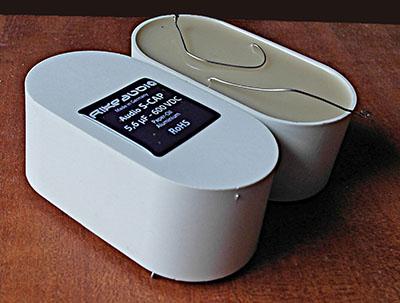 The pursuit of hi-fi excellence can follow two paths: upgrading your equipment to something better, or upgrading what you already have to make it better. As audiophiles know, both paths can become addictive, and there are 'dealers' who will supply our addiction, and happily take our money. Those on a tighter budget tend to be the ones who try and squeeze the best possible performance from what they already own. After all, components should in theory cost a lot less than a finished item. But start filling a DAC, amp, or even speakers, with exotic components, and you can easily spend far more than you intended to. And that brings us to the subject of this review, some paper-in-oil capacitors from German suppliers, Rike Audio, called the S-Caps.

Rike Audio make high-end (and very beautiful) valve equipment. In their quest for a better capacitor they chose the path of designing and making their own. The S-Cap is formed from aluminium paper in oil with a double layered dielectric, it is designed for 630Vdc rated use and has 10% tolerance. Every capacitor is tested with a test voltage of 1625Vdc so you can rely on these capacitors even when using the higher voltages typically employed in valve equipment. Capacitors 1,0 uF and less are supplied in a cylindrical housing, these are mostly axial types (lead outs at both ends), however 0.33uF and 1uF are radial types (lead outs are at one end only). Capacitors 1,5-4,7 uF are in rectangular shape and larger in oval axial shape.

The S-Caps come in a range of capacitance and sizes. The very first thing that I noticed about the review samples was the size (96mm x 49mm x 37mm) the largest capacitors that I had ever had in my hands, although not much larger than some Siemens 4.7uF polystyrenes that I had to hand. I had asked for 4.7uF as that's what I usually use for capacitors in the signal path, and had a number of different samples to try the S-Caps against. It turned out the UK stockist was out of 4.7uF's so I took 5.6uF's instead. I quickly realised that I had no equipment with the space to install the S-Caps so I set about building a small rig to hold them together with another pair of capacitors. The rig also included a switch to select the S-Caps or the alternatives, and it was situated between the interconnects, and an amplifier. The amplifier that I chose for the review was a Gainclone type chip amp. These amplifiers use so few components other than the chip, that they sound very transparent, and reveal differences in the other components quite clearly. The only modification that I made to the amplifier was to remove the DC blocking capacitor (as the capacitors in the rig would be doing that job). 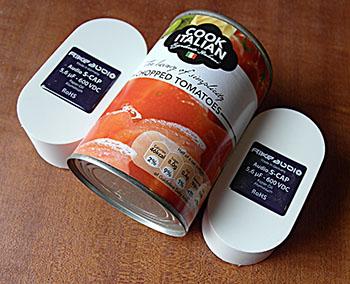 There's not a lot to report about a good capacitor as it is not a case of saying how they sound but more how little they change the sound. Against all the examples that I compared the S-Caps to, including some Russian paper-in-oils, Obligatos, Siemens, Clarity Caps, Ansars, LCR (all) polypropylenes, and Black Gate NXQ's, they were the least coloured, and the most transparent. And as Rike Audio claim, the S-Caps do nothing to limit the dynamics of the music, a quality that was noticeable against some of the other less expensive capacitors that I compared them with. We are not talking much though as the other capacitors were samples that I had selected over the years for their good qualities. But, when a (better) capacitor is required in the signal path, I would strongly recommend the S-Caps based on their performance during this review.

So are the S-Caps worth their fairly hefty asking price? First off, as expensive as they are, the S-Caps are nowhere near the most expensive capacitors in the world of boutique components. Whether they are worth so much more than some of the other capacitors that I tried them against considering some of those cost less than 5 UK pounds is something that only the individual can decide for himself. Personally, I know how much you can spend buying a shelf full of cheaper capacitors trying to find the 'magic bullet' only to find that they all perform similarly, and have collectively cost the price of a boutique component such as the S-Cap. It may well be better to go for something like the S-Caps at the outset, but then part of the appeal of DIY upgrading, is trying to get the most sound for your pound. As ever, that old law of diminishing returns is clearly at work here, and squeezing those last tiny bits of improvement out of your hi-fi won't come cheaply.

If the S-Caps appeal to you then do make sure that the capacitor with the capacitance that you require will physically fit inside your equipment. If you need a larger capacitance, you may well land up rebuilding the case to accommodate them. I wanted to try the S-Caps on the output of my valve pre-amp but it would have been too much hassle to do so. Other than that, if boutique capacitors are on your shopping list, I can recommend the S-Caps as performing as well as they look.