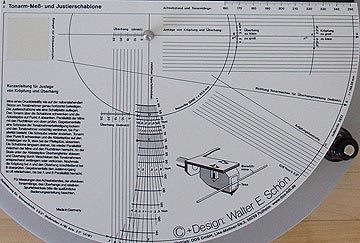 I've always found cartridge alignment a nerve-wracking chore, being frustrated by the innate inaccuracy of most tools involved, and of the tedious tiring eyeballing process itself, of course.

All of the templates I've used so far, including the old one and the new one that comes with the HFN&RR test records, the Rega protractor, the free designs found on the net, the official SME 2-point template, and even the dedicated template for the SME IV, all of these suffer from small errors in their printed patterns and in the location of the spindle hole. Nearly all of these have warps in various degrees. And being just printed on paper or on the thinnest of cardboard, they not only never match the actual thickness of an LP, but they also tend to catch the stylus with their roughly-textured surfaces, leading to scary moments on a wobbling spring-suspended belt-driven platter. And finally, most of them don't list the assumptions underlying the positioning of their zero points: Baerwald or Stevenson? 60 mm inner diameter, or 65? Etc etc.

Enter then the Schon Tonarm-Mess und Justierschablone. Printed on a white piece of plastic the thickness of a (thin) LP, this template allows the usual 2-point method for finding correct overhang and offset angle. But there are also diagrams that help setting overhang itself directly (i.e. cartridge and arm over the spindle, if and when possible), and indirectly (with a sightline to be aimed at the tonearm bearing). Then there is an area dedicated to measuring the actual, post set-up, relative tracing error at any radius. The Schon, when held vertically, can also be used to directly measure the tonearm's mounting distance, although this involves the aid of a suitably heavy and straight object to hold the template against. (Perhaps Michell should start giving little black monoliths with their Odyssey turntable? Although an old VHS tape will probably do as well.)

Finally then there is a mirror for checking azimuth with. This mirror looks, for once, useful as the reflective surface is at its top, as opposed to its bottom.

All in all this looks promising, not? Especially when one factors in the cost: a mere 50 euros or less. If you find the Schon template. I know of only one internet shop (see link above), and one real-life shop, in the Netherlands at that. VertrieberDOS-HIFI's own website doesn't even mention this protractor. Good luck to you getting hold of one, then!

The prescribed method for finding the correct combination of overhang and offset angle is smart. If you happen to own a cartridge with a flat, preferrably vertical front (think Denon DL-103, Gradoes, Jan Allaerts, EMTs, Benz Aces, most Ortofon MCs, Koetsus, Shelters, ...) then you are invited to tape a filler lead pencil to it. This makes the orientation of the cartridge body with respect to the template sight lines that much easier to see, allowing a quick zeroing in on the correct overhang, and an approximate offset. The correct offset is found then by twisting the cartridge to align the cantilever properly to the template.

Now, pencil lead sheds graphite, and this may leave marks and stains on the cartridge. Something I don't really entertain on my goldy-nosed MC1b. So I took the pencil, and painted it black. (Tiny pot of Humbrol, bringing back triple-decade-old memories of building Airfix models in the small office behind my grandparents' store. Ah ... les temps perdus!) Of course the pencil adds mass to the cartridge, and thus increases VTF during set-up. The lead I used weighed in at 0.03 g, and was of course compensated for. 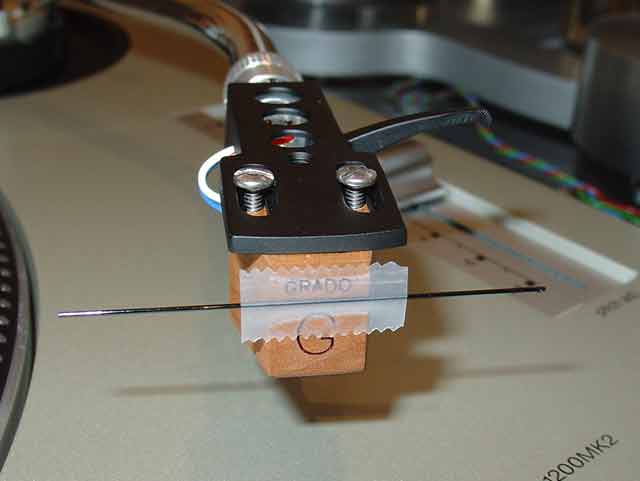 The Schon comes with instructions printed on the template, telling you at each null point, and for each orientation of the pencil/cartridge relative to the sight lines, what to do next in order to converge. Neat and fast. 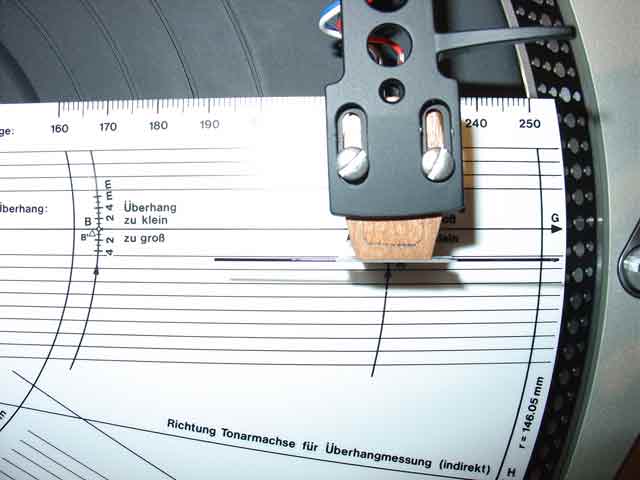 Put the stylus exactly in point A, and adjust the offset angle until the bar runs parallel to the sight lines. 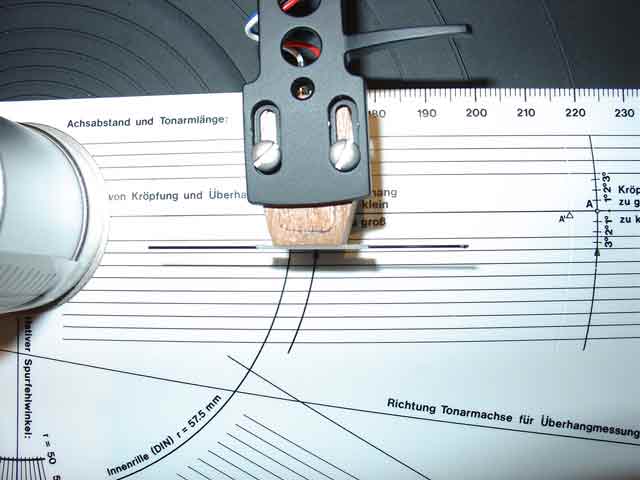 Move over to the inner area around point B. The Schon has a handy little groove there. Put the stylus in that groove, and rotate the platter until the pencil bar once more runs parallel to the sight lines. 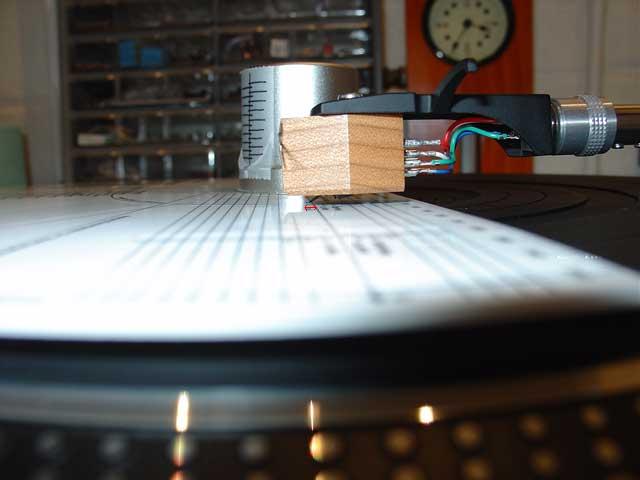 Now take a step back and regard the cartridge from the side. Here we see that the stylus is resting in front of point B, indicating an overhang too high.

Reduce that overhang by moving the cartridge back in its headshell, trying not to change the offset angle. 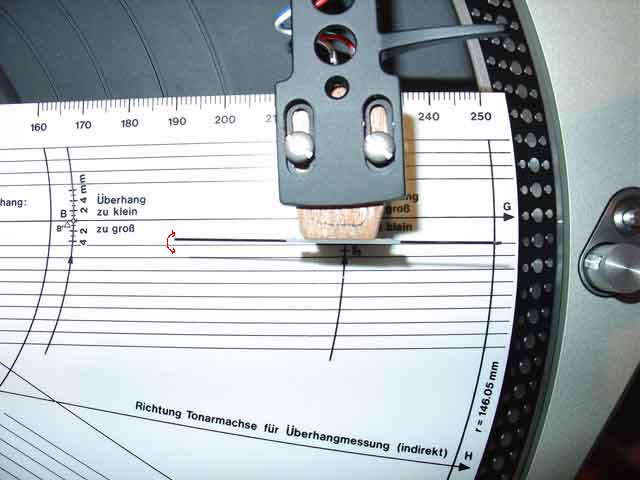 Now go back to the outer area, and rotate the template so as to put the stylus again exactly down in point A. Have a look at the bar and the lines. In this case they run not parallel anymore, indicating too much offset angle. 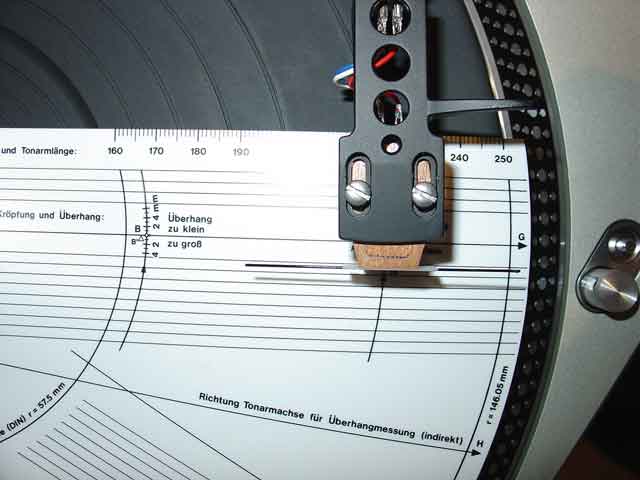 Compensate this by rotating the cartridge in the shell, trying not to change the overhang. Once parallellism is achieved go back to point B and repeat the whole procedure until both overhang and offset angle are correct in both points A and B.

Aided by the optical amplification effect of that pencil bar, and the rigorous discipline of changing only offset in point A, and overhang around point B, this method assures swift and painless convergence.

Of course it relies entirely on the assumption that the cantilever is perpendicular to the cartridge's body front, and that the stylus is perpendicular to the cantilever. But so many methods makes this assumption. And those of us lucky enough to own a suitable microscope can always investigate the cartridge first, then align to the body, and eventually compensate for any pre-measured cantilever or stylus errors.

So far so good, and at the first sight, or even the first casual use, this Schon template seems to be the end-all template.

For starters, the manual is in German only. Not a problem if you have done cartridges before, but probably a showstopper if you are an absolute beginner. An additional sheet with a translation of the most important notions and methods would be really nice.

Then the chosen LP radii, as advertised, are according to DIN: 57.5 mm inner radius, and 146.05 mm outer radius. This tries to optimise tracking angle and distortion over a very very wide area, wider than the area used on most commercial LPs. This is an approach that works well for records with long playing times, or for classical music with the finale at the end of a side. But for most other records a better result, i.e. even less average distortion, would have been possible with an inner radius chosen at 65 mm or so. (Clearaudio propose even 75 mm, but that is rather excessive and only applicable to present-day audiophile pressings with silly short playing times.)

But anyhow ... Using DIN radii and the Lofgren A (aka Baerwald) error minimisation criterion the resultant null radii should be 63.1 and 119.2 mm. The Schon measures 62.7 and 117.6 mm. And that's taking about 0.5 mm of error in the spindle hole location into account! What's the point of an alignment template machined in plastic if it is this inaccurate???

Now this isn't as bad as it sounds. DIN LP radii with Baerwald null radii yield peak distortions of about 0.7%. A set-up with the Schon's (erroneous) null radii would lead to the same amount of distortion, but now over the skewed LP area of 57 mm to 143 mm. At 146 mm the distortion would be 0.75%. Big deal. (Incidentally, the Schon sports a second set of null points, at 61.2 and 112 mm, optimising for 0.63% distortion over the 56 to 135 mm area. The reason behind this evades me completely.)

But even as the error induced by my particular sample's inaccuracies isn't lethal, that still doesn't make me like the DIN trade-off.

Now not all is lost, as the template's sight lines run uninterrupted over the full width of the record, and nothing prevents one from, carefully, adding one's own favourite null points using just a thin non-eraseable marker (even if this forces one to forego the joy of that nifty little point B groove). There are excellent shareware spreadsheets around that calculate null points to anyone's wishes (have a look at this one). The following table summarizes a number of possible solutions, with the distortion figures calculated for a cutting velocity of 10 cm/s:

We are not at the end of it. 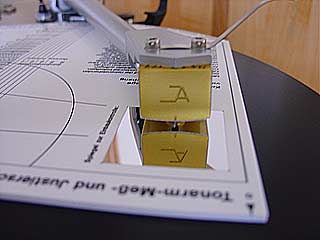 Despite being made of plastic, my Schon was warped. Almost as badly as all of these paper protractors I hold and hate. This slightly affects setting overhang and offset angle, but it also completely screws up any attempt at using the mirror for setting azimuth. A partial solution was found in a small yet heavy puck/weight I had lying around. Sited over the spindle it flattened the template enough to allow good cartridge alignment. When setting azimuth it had to be moved over to the area near the mirror to be fully effective, and even then there always remained doubts as to the measurement's validity. Very annoying, this, and in the end I believe a flat grooveless LP to be the best 'mirror' for setting azimuth. Try something like Joe Jackson's Big World side 4.

Here we are with a product that could have been truly wonderful, but that in the end is ruined considerably by its overall lack of construction accuracy and inept packaging. It is only to be hoped that Schon/DOS tighten up their manufacturing process.