Taking a walk on the wired side

I promised myself when I started writing for TNT that I would never review cables! It is one of the most hotly debated, and controversial aspects of hi-fi, and one that we are never all going to agree on. However, despite vast experience in experimenting with cables, mostly of my own design and construction, I thought that I should at least try some commercial offerings, partly to broaden my knowledge, and partly to fulfill my duties as a reviewer. After all, somebody has to review them.

Perhaps before I begin the review, it would be fair to state where I stand in the great cables debate. Do they make any difference, if so how much, and do I believe that you have to use exotic materials and complex manufacturing techniques to make a 'better' interconnect or speaker cable?

I believe that cables can and do sound different to one another. However, the differences between interconnects are mostly very small, and in no way as large as most of the advertising hype would have us believe. With speaker cables, the differences can be greater. But notice I am talking differences here, and I believe that whether a cable sounds 'better' in a system, is more to do with the synergy between that cable and the equipment (or rather the specification of that equipment, eg input/output impedance) rather than the properties of the cable itself!

As regards cable materials, it is true that a cable made from say silver wire, will sound different to one made with copper wire. However, whether one will sound better than the other depends on the system that they are used in. Silver wire typically sounds brighter than copper wire. In a system that sounds a little dull, a silver cable may well sound better than a copper cable. And visa versa of course! It is also my experience that the insulation materials used for cables make a difference to their sound, again, more so with speaker cables than interconnects.

So I stand somewhere in the middle of the great hi-fi cables debate, hopefully with an open mind. Let's remember that we may think that we are technically advanced at this stage of man's evolution, but they did in Victorian times too. No doubt in a hundred years time, we will be just as further advanced, and laughing (or horrified) at the state of today's technology. That said, it is an ocean of hype in the world of hi-fi cable selling, and we all need to keep a healthy degree of common sense on hand when talking about the subject.

And so on to the review. First up, I tried the two interconnects. All the Solitone cables are very well constructed and certainly look classy. I understand that the connectors are made to the supplier's own specification. The phono plugs are sturdy, gold-plated items that feature a clamping mechanism to ensure a good tight fit on the phono socket. The cables are finished in a silvery-white coloured braided material that again adds to the classy feel and appearance of these items. 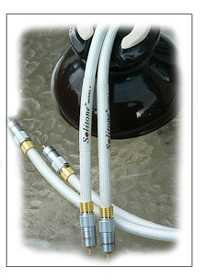 Now there are two ways of looking at my report of the Solitone interconnects. You could say that if they don't exceed the performance of some home-brew interconnects then they can't be very good. On the other hand, if you know how good the Shoestrings are, then you could say that if the Solitone interconnects equal them, they are about as good as you can get. I suspect which view you take will depend on whether you buy and use commercial hi-fi, or tend toward the DIY approach. I should stress that after many years of experimenting with interconnects (and I have spent much more time on them than I am happy to admit), I believe that the Shoestrings are about as good as interconnects come. And the feedback that I have received from Shoestring builders, and users, confirms my opinion of them.

So where does that leave us with the review of the two Solitone interconnects? Well, objectively, I have to say that they are both up there with the best that I have heard. Given that they are well-made from good quality components, there is nothing negative to report about them. If you are looking for interconnects that will give you possibly the best sound, are built well, and look good too, they meet those criteria. On the other hand, as a reviewer who has promised to write the truth, I have to say, if I cannot hear a difference between the two Solitone interconnects, then I cannot recommend spending the extra 110 euros on the more expensive Solitone-X model. As ever, I remind you that this is my experience, in my system(s), and if possible you should try to audition both cables in your own system, as much depends on the synergy of the cables with the system that they are used in! 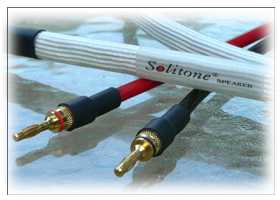 Moving on to the speaker cables, I'll start with the less expensive Solitone cable. Like the interconnects, the Solitone speaker cables are well built and nicely finished with quality connectors and a covering that is identical to the finish of the interconnects. Replacing the Anticable clones that I use in my main system, I installed the Solitone cables and sat down to listen. I could hear a slight difference between the Solitones and the Anticables with the latter having slightly more bass. There honestly wasn't much more to say about the Solitones other than they sounded very good, offering a reasonably balanced sound and good detail. I listened to both the Solitones and Anticables, swapping back and forth each day until I was happy that I had made an accurate assessment.

Then I connected up the Solitone Speaker-X cables. Immediately I heard more top end detail. It was like the amp was turned up but the actual volume level wasn't increased. Somehow, more detail was being dragged out of the amplifier. What was most obvious, was the atmosphere that was apparent on some types of music, typically live performances. It was more than just the usual sounds in the background, eg people coughing, it sounds a bit weird but it was almost like I could hear the air, feel the tension. I went back to the Anticables, and that 'air' definitely wasn't there with them. I switched back and forward between the two a few times to listen for other differences. Being totally critical of the Solitone Speaker-X, I noticed a slight blooming of the bass but I must clarify that this was with electronic bass rather than acoustic bass that was perfectly reproduced. And I would go further and say that when I noticed the 'bloom' it was more to do with the bass being boosted artificially, as it is on some recordings. However, I didn't notice the same bloom so much when using the Anticables.

I was keen to see if I could bring the Anticables nearer to the performance of the Speaker-X cables so I brought my old CAT5 speaker cables out of retirement and ran them in parallel with the Anticables. This certainly added more high frequency detail to the sound, and did make the differences between them and the Speaker-X cable much smaller. If I had to choose between the two now, I honestly have to say that I would go for the Anticables (CAT5 in parallel), foregoing some of that extra 'atmosphere' and transparency for a very slightly better defined bass. But my honest opinion of the Speaker-X cable is that it is a very good speaker cable, capable of revealing detail that many other speaker cables can't. Certainly a good enough performance to recommend them for a short-list if you are looking to buy cables in that price-range.

But there is one other important aspect of the Solitone speaker cables to mention before I close. Solitone suggested a method of testing their cables to me and I wondered why they should be telling a reviewer how to audition hi-fi. One of their instructions was to listen to each cable and then turn up the volume. The reason for this little exercise is to demonstrate how well the cables cope with issues such as EMF. If you look at the Solitone web site, you will see references to names like Heaviside and Lenz. If you can cope with the science involved, you can Google these names and read about the theory that the Solitone cables are designed around. In short, I will just say here that if you don't get the cable construction 'right', you build in problems that may not show up at lower volumes, but do when you play louder. I have heard this for myself trying out different types of speaker cables over many years. What I can report is that the Solitone speaker cables, both of the models that I auditioned let the music flow 'freely' at higher volumes. With cables that are not properly constructed, you will hear some compression as the volume level is increased.

So there it is, my first cable review! I do wonder how much value such a review can be given that so much depends on the synergy between any cable and the equipment that it is auditioned with, (and personal taste) but I guess we have to start somewhere! I tried these cables with Gainclones, Class-T amps, and a monster solid-state amp with a 1kVA power supply. I have tried to walk a very narrow path in this review, remaining both honest and factual, while respecting the product and the supplier. I will also add that in comparing the Solitone cables to my home-brew items, I am not making any comment on the prices of the former. We should not forget the (considerable) cost of producing and marketing something commercially and I leave the question of value-for-money up to the prospective purchaser.

What I have learned is that you can never really sit back and say that 'I have the best'. Putting together your ideal hi-fi system is more to do with trying as many different items as you can - and learning from that experience as you go along. It's also about the compromises that crop up all the time, with different components often sounding 'different' rather than 'better or 'worse'. I guess what we as reviewers are trying to do is narrow down the choice for the reader, or at least point them in the right direction to something worth auditioning for them self. As such I am happy enough to include the Solitone cables on that short-list! At least their sales information relies more on sound scientific theory than unsubstantiated hype!