I admit to having a long-standing curiosity about the Swedish Supra line of cables. First of all, they're from Sweden, hardly a country known as a hotbed of high end design. Secondly, most Supra products employ a tin plated copper conductor which really interests me.
The vast conventions of high end cable design tend toward a pursuit of conductivity. Copper is better than tin, gold is in between and silver is the very best of all.
Beyond this, there is the tendency on the part of buyers to find validation in the use of precious and semi-precious conductors to pave the way for their music's electrons as they while their way through their systems.
Still, it does make one wonder whether high conductivity always yields high fidelity. Supra's Tommy Jenving explains the issue more completely: "The higher resistivity of the tin minimizes the current jumps from strand to strand in the conductor (twisted strands, and the current tries the straightest way.)
These surfaces are malign to the signal when of copper oxide. They not only act as double directivity diod thresholds but the electrochemical potential is very different, actually up to 1 micro volt between copper oxide and copper. As it acts as a semi-Litz (semi-insulated wires), it also minimizes the skin effect."

Surely there have always been those willing to swim upstream. One of my favorites was the now long forgotten Lindsay-Geyer Highly Magnetic cables of the early 90s. Supra's philosophy in the use of tin clad copper is that is totally eliminates the inevitable corrosion of the encased copper while retaining its inherently superior conductivity. One of my favorite attributes of all of the Supra cables is their supreme flexibility.
Whether thin or thick, short or long the Supra cables are a joy to install and position. Perhaps this is more something to be valued by a reviewer than a typical user, but still it is far preferable to the unbending and unwieldy conduits which have become all too common. 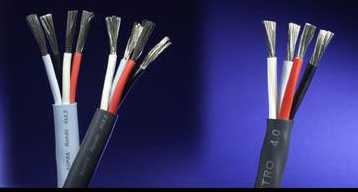 I first used the Rondo 4x2.5 in a long 4 meter run. Supra makes and supplies some intriguing spades that they call the Fork XL. They are cleverly designed to be usable in a variety of positions and can be affixed to the conductors with either a set-scew or solder (or both, as Supra terminated the more expensive Sword).
The quality of gold plating is not the best as a number of the spades had their plating lift off in strips almost like gold leaf. At only $2.60 per foot, the Rondo is an excellent cable. Most cables at this price point suffer from what can only be called haze or an unnatural accentuation of treble frequencies that is really true distortion.
The Rondo's were instead very relaxed in their presentation and possessed of a fine musical balance. Even in a long run and with speakers of extended low frequency capability, the Rondos approached the performance of a genuine full range cable. The high end was particularly good, with an excellent sense of clarity without sounding forced. The midrange was generally transparent if somewhat less palpable than one may prefer.
The sonic backdrop was silent while the sound stage was of reasonable size, Images were well placed and focused. At the price, the Rondo is quite an amazing cable and is well suited to modest high end systems. 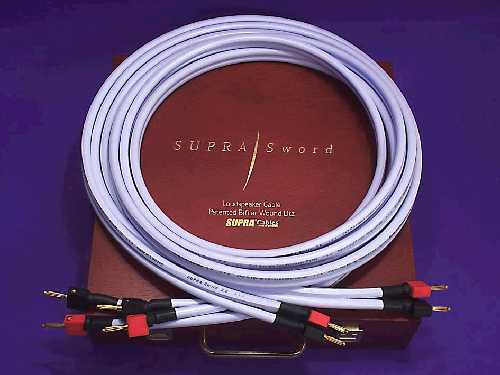 The Sword is Supra's flagship cable, though quite modestly priced. It manages to make quite an initial impression as it arrives in its own hardwood case, complete with a gleaming metal handle. Very nice at a price where some cables arrive in a plastic bag!
The Sword is a more physically substantial cable and it was used as a 3 meter factory terminated pair. The same Supra Fork XL spades are employed and are secured by both the screws and solder. The more massive Sword retains much of the flexibility of the Rondo.
However, it does create an operation problem of note: Since the diameter of the cable is quite large, the "end" of the cable actually overlaps with the Fork XL in such a way that it can be hard to get the tines of the fork to fully engage on the amplifier and speaker binding posts. One ends up with only the very thin tines being secured by the posts while the more substantial "base" of the spade is off the post.
Not the best in terms of contact quality and something that Supra would be well advised to address at some time in the future.

The Sword builds upon the fine sound of the Rondo with a more authoritative presentation and greater top and bottom octave extension. This allows a system to seem to breathe more easily and make dynamics more flowing and effortless.
The top octave was especially well rendered and natural, in fact all of the Supra cables excel in creating a top octave that is both extended and very much free of lingering distortion or grunge. The sword's midband was more forward than the Rondo, and quite a bit more revealing.
At the price of just $795 for a 3 meter pair, the Sword has to be considered every bit as much a bargain as the Rondo. It is well suited to systems with a combination of greater dynamic range and low frequency extension.

Without going into specific system details, I can say that all of my evaluations involve testing review samples in a number of system configurations. This includes planar speakers with high powered solid state amplification and dynamic speakers driven by fairly low wattage tube amplification.
When used in the tube based systems, I found that the Supra products could sound somewhat reticent or polite. This was never heard in the solid state systems but was perhaps merely the other side of the coin that allows the cables to sound to very relaxed and natural in the transistor systems. This is not a huge concern, but did merit noting in this review.

Supra cables are obviously superbly designed and engineered products as each of them performs far beyond their price points. They have a natural and musical balance which makes them well suited to a variety of systems. More than anything, they prove once again that there is more than one way to accomplish the goal of fidelity.
While many cable makers would frown on the use of tin in any aspect of their cable's designs, Supra has found a way to use the material in a way that allows for a fine and musical sound. There's a lesson to all of us: Keep your mind open to new ideas and your ears sharp! Supra cables are recommended for your audition.