Can Fancy Capacitors Rescue Passive Crossovers?
&
By How Much? 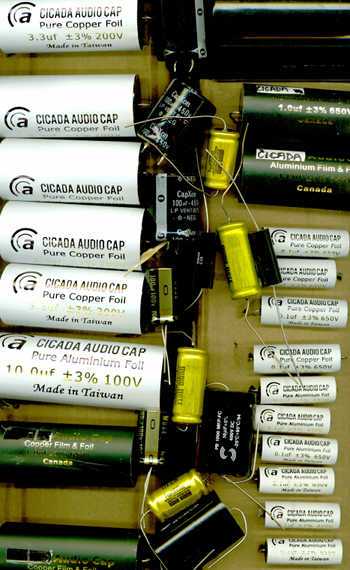 Cicada capacitors' current biggest market is OEM loudspeaker crossovers. With the big cylinder larger capacitor values and high power handling needed by passive crossovers, falling ESR with frequency ceases to fall at a much lower frequency as the capacitor hits its series self resonant frequency. Just another reason NOT TO USE PASSIVE CROSSOVERS AT ALL. However, this reviewer has to comply with the dominant hegemony in order to review stuff, otherwise passive crossovers would have no place in the old scribe's listening room.

Having got that caveat out of the way, we must turn now to minimising the damage done by passive crossovers. The least problem (despite the misinformed ramblings of much of the audio press) arises from the inductors (or chokes in olde English). Big core air cored inductors behave reasonably linearly above the DC resistance. Ferrite cores enable smaller, cheaper lower DCR inductors but they are much more non linear at higher power levels as the cores approach saturation, acting first like a compressor then clipping with a loud crack on peaks. The crossovers used in this test use low DCR litz wire on a big air core without any bobbin material. The symmetrical tweeter section uses high power non-inductive wirewound resistors and the crossovers are mounted outside the loudspeaker cabinet in their own spacious boxes with layout designed to avoid mutual inductance.

In big high power capacitors, capacitance varies not only with input level voltage (particularly near maximum operating voltage), but also with frequency. Any DC on the amplifier output will bias the capacitors too (avoided in this test by transformer coupled amplifier outputs), raising dielectric absorption with some dielectric materials. Hence, every statement in this review should be preceded by the phrase, "I'd rather be dividing loudspeaker pass bands at line level than like this!".
"Enough already," protest plebs, stage left, "The old fool doth protest too much!"

Tom Fung's Cicada capacitors have already been reviewed in these pages at line levels in various contexts and compared with some of the established references. The established references in loudspeaker crossovers are different from amps for some curious reason. Curious because providing the power handling and values are OK, any capacitor ought to perform anywhere. Using the popular Solen crossover capacitors in local valve amplifier bypass locations (between anode load and earth, or plate load and ground, if that's your preferred nomenclature) has been very successful, as have paper-in-oil types in passive crossovers, so it's a mystery why builders stick to the same dull old narratives.

The MKP/SCR/Solen/Châteauroux family of metal film capacitors have been mainstays of high performance passive crossovers since your old scribe first soldered a crossover as a schoolboy in the 70's. The good folk of Falcon Electroacoustics (then in Bexhill-on-Sea, later of Norfolk) were patient enough to explain the importance of appropriate capacitor choice in crossover building and as funds allowed, the bright blue non-polar electrolytics were replaced by metal films with surprisingly big improvements as a result. Other well established types, like Bennic, Wima and Dayton, usually polypropylene types, have also become the established 'good value' choices. These too will be compared.

This is not a truly controlled experiment as some values will have to be made up of series/parallel multiples of capacitors in either the reference types or the Cicada types. The first and mind bogglingly obvious thing to observe is that ALL THESE FILM TYPES ARE CLEARLY AUDIBLY SUPERIOR TO NON-POLAR ELECTROLYTIC CAPACITORS IN ANY POSITION IN A CROSSOVER NETWORK. Even positions like Zobel networks or parallel LCR resonance 'traps' demonstrate the obvious superiority of film types in passive crossovers.

There are claims on the net that crossover capacitors can have no effect on sound quality, provided they are of the correct value and power handling. These claims are made by those whose belief system will not allow them such an idea as variables and uncertainties frighten them. There are very basic reasons why capacitor types affect sound, even as bluntly as changing frequency response due to easily measured parameters like ESR. Capacitors store energy, that is why we measure them in joules for power supplies. Stored energy is a jolly good thing in power supplies but a terrible thing in crossovers, and the storage and release linearity is affected by the design priorities and parameters and materials chosen. The microphonic tendencies of some capacitor constructions may also explain the benefits of removing crossovers from inside loudspeaker cabinets, but equally might apply in the room soundfield. As stated in the previous test, "to believe that any 100V 5% capacitor will sound similar to any other 100V 5% capacitor is deluded and equally, to believe that all 630V paper in oil capacitors sound better than all polypropylene dielectric capacitors in all applications is equally deluded." Prejudice has no place in the pursuit of knowledge and we should no more trust the naysayers than the purveyors of pixie dust until we have tested claims for ourselves in repeatable experiments. Check out the explanation in the previous test.

Simply put, this test in the passive crossover context, tested in 3 positions:

Predictably, the third order series high pass crossover demonstrated differences more strongly than either of the alternatives. In a modest cost loudspeaker system the differences would relatively modest compared to the cost of the capacitors and the possibility of spending the money elsewhere on better drivers or power amplifier.

In a high resolution loudspeaker system with passive crossovers (if such is neither oxymoron nor paradox) the differences are similar to those found in the previous test at lower currents. The results might be less predictable in loudspeaker crossovers, but are explicit and repeatable nonetheless. Much as it sticks in the old scribe's craw to admit it, these expensive capacitors do make a significant and repeatable improvement in passive crossovers compared with the established first choice picks. High frequency timing is slightly improved, which is always the bane of passive high-pass crossover filters, although curiously in line level filters an interstage passive filter usually times better than the traditional feedback filter. Clarity is much improved, as if some smearing is reduced.

The high pass filters both show improvements in transparency with the Cicada capacitors. They both also improved soundstage depth and the spatial relationship between cymbals and the rest of the band. Obviously a change in capacitor value would have just the same effect, but these were measured to within 10% (±5%) using a capacitance meter at the end of the lead out wires, not at the capacitor body. Screw strip connectors were used to make up values and allow easy substitution and values were measured on the screw tops to ensure as close an overall match as possible, most being within 2 or 3 percent. Hence the differences must be mostly explained by differences in type.

The low pass parallel capacitors also demonstrated a difference. In this position the difference seems in the domain of transparency. However, integration between high pass and low pass sections was notably improved when both crossover legs were fitted with the Cicada caps.

More paranoia audiophilia. Despite the conclusion in Part 1 that these very expensive capacitors (in context of commercial grade, run of the mill price for audiophile grade) have more effect the nearer they are to the information source, the Cicada capacitors did make a massive difference to passive crossovers. However, a bigger difference will always be had from upgrading to active crossovers and an amp channel per driver.