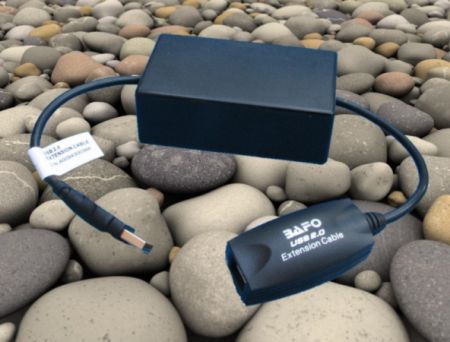 I have already auditioned two or three up-market USB cables and heard for myself that they can produce a small but definite improvement with computer audio sources that use a USB connection. The Odyssey Audio TOD2 USB lead goes a stage further in that it improves both the 5 volt electrical supply, and the signal itself. To avoid any confusion, let's make it quite clear from the outset that this is not a DAC despite bearing a close resemblance to the Devilsound DAC. What it is designed to do is to remove electrical noise that may be transmitted from the computer to the audio system via the DAC. The TOD2 uses a virtual battery circuit to clean up the 5 volt supply that then powers a USB repeater circuit. The regenerated USB signal output is therefore no longer mixed with noise coming from PC. The TOD2 will work with both USB 1.1 and USB 2.0 devices.

The TOD2 is a shortish USB cable with a small black box situated toward one end. Although nearly all USB equipment is hot-swappable, the TOD2 should only be plugged in and out while the computer is shut down. It requires no special drivers, so having plugged it in between my PC running Ubuntu, and the KingRex UD-01 USB DAC, I powered up the PC. I should say that I had previously listened to the system (KingRex USB DAC, KingRex Preference pre, Virtue Audio V1 amp, open-baffle speakers with Goodmans 201 drivers) to get an idea of how it sounded while using a standard USB lead.

There is always a worry that when you have to wait a while before comparing two pieces of equipment that you will not be able to discern any difference and of course, having to power down the PC to install the TOD2, there was a delay before I was able to listen again. But even with the delay, the difference was quite apparent. The sound became 'larger' stronger, more pronounced. It was most noticeable using the Roger Waters album 'Amused to Death' where all the Q sound effects were brought out further into the room, and were slightly more tangible. As with the VertexAQ USB lead, the background was slightly 'blacker', and macro detail easier to differentiate. The sound was less digital, and generally more natural sounding. In essence, the TOD2 does what it claims to do.

I should point out that the KingRex UD-01 uses its own 12 volt power supply. I did try the Trends UD-10 USB DAC, that uses the 5 volt supply from the PC but I don't think that I heard a larger improvement with the TOD2 than I did with the KingRex UD-01. However, if you use a USB DAC that takes its power from the PC, the TOD2 will provide it with a much better supply than via a basic USB lead, and possibly an even greater improvement than I heard.

And that's about it. Another tweak for the computer audio source, and at the price, something worth trying if you run a USB DAC, more so if it takes its power from the PC.