SPDIF, electrical or Toslink, and which Toslink? 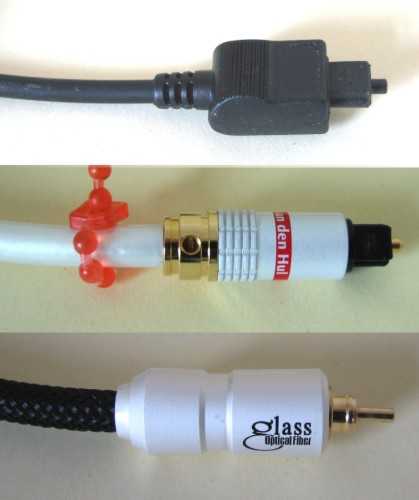 (*) prices refer to items bought from the named suppliers, in the UK (YMMV).
Reviewer: Nick Whetstone - TNT UK
Reviewed: May, 2008

A friend of mine bought a Logitech SB3 and a used Entech 205.2 DAC (I don't think the Entech is still available). After a few mods to the DAC, he reported excellent results using a Toslink (optical) connection between the SB3 and the DAC, as recommended by the manufacturer. It got me thinking about trying an optical connection between my own SB3 and the external DAC. To make things a little more interesting, I decided to get together a few different Toslink cables and compare their performance against each other, and the electrical coaxial connection.

Well I would have liked to have had five or six Toslink cables but it wasn't to be. I don't know if some suppliers are wary of their cables going through such a review, but in the end (after much wasted time chasing up some parties) I had to settle on two samples supplied for this review, and one that I purchased myself.

The first cable to arrive was from TM3 Connections who kindly sent me a sample of their Audiophile Glass Optical Cable that sells for just under 28 UK pounds for the 90cm length. It's a nice looking cable with a textured finish to the insulation. It's connectors are different to the ones on the other two Toslink cables in this review in that they are round and do not have to be exactly orientated to make the connection with the socket.

The Van Den Hul cable arrived next via their UK agents Henley Designs. Called 'The Optocoupler MK II' it comes in a smooth white jacket with classy looking connectors, and is one metre long.

Last but not least, I went to Ebay (UK) and purchased the cheapest Toslink cable that I could find for the huge sum of 99 pence! Yes, that's right, under one UK pound. It is thinner than the other two cables but has similar connectors to 'The Optocoupler',even if they are plain black in colour.

The electrical cable was made by me from 75 ohm Sharkwire coaxial cable purchased from Maplin. It cost 2.39 UK pounds for a metre. Connectors cost approximately four UK pounds.

To do this review, I connected the cables between my SB3 and the Behringer DEQ2496 that goes between the SB3 and the external DAC. This made it possible to switch back and forward between the electrical connection and the optical. Unfortunately, changing between the Toslink cables was more of an effort, more so as my sciatica was particularly bad at the time! The Optocoupler was also a real pain to remove due to being such a tight fit.

Well, I don't intend to waste much time on going into massive amounts of detail here. The truth is that I honestly couldn't detect a difference between any of the Toslink cables! There, I've said it! Shock, horror, reviewer says that he can't hear a difference! I also found that the electrical connection was very slightly 'sharper' than any of the optical connections. By that I mean that one of those mystical 'veils' was removed from the music. So I'll be sticking with the electrical SPDIF although I could live with the optical connection without too much angst! I'll leave it you to decide how much you want to spend on a Toslink cable - if appearances matter that is!