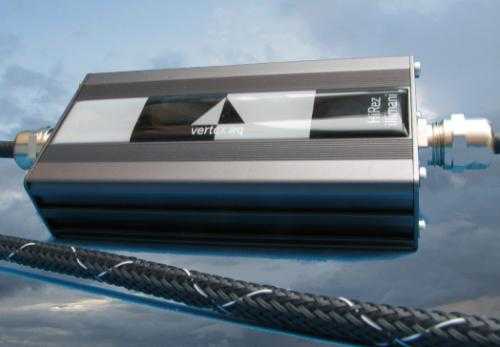 Ask most hi-fi reviewers and I bet they will tell you that they don't really like reviewing cables. There is so little to say about them, pieces of wire with connectors at either end. The best we can do is to compare them against something similar, that's why you often see several cables reviewed together for a shootout. So why have I agreed to review a single USB cable? Well it comes from VertexAQ and I have been more than impressed with everything that VertexAQ have shown me so far. They specialize in preventing mechanical noise traveling between one part of a system and another. And of course, the interior of a computer is quite noisy. Apart from carrying the music signal, cables can and do carry mechanical vibration as well. I've already heard that there can be differences with USB leads, the Locus Design Group Polestar USB Cable that I reviewed here being one example.

The Illimani looks different from all the other USB leads that I have seen. Like the other VertexAQ cables, there is a smart looking metal enclosure part way along the lead. Total length of the review sample cable was 1.5 metres. The cable, wrapped in a black braided sleeving with a silver thread criss-crossing it, exits the box at either end via some expensive looking cable glands. The USB connectors look fairly standard. Apart from the usual VertexAQ trick of stopping any mechanical noise from passing from the PC to the USB devices at the other end of the cable, the Illimani also has added technology to reduce RFI/EMI.

To try out the Illimani, I used a PC running Ubuntu and Exhaile for the music play back. The Illimani went between the PC and a Trends UD-10 that was in turn connected to a Scott Nixon DacKit. In use the Illimani pulls off exactly the same trick as the Polestar, i.e. it provides a blacker, quieter background, reduces some 'glare' and brings out the micro-detail in the music. No, it's not night and day and you really only appreciate the improvement over an extended audition. I can't say from memory how much better it is (or isn't) than the Polestar as I no longer have the latter to hand.

So who on earth is going to pay over a thousand pounds for a USB cable that makes a small but definite improvement? The answer to that is going to be existing VertexAQ customers who have the rest of their system optimised with other VertexAQ products, and know from experience that these products do squeeze the maximum amount of performance from their systems. For the rest of us though, it is another indication that using something better than a standard USB cable can squeeze an extra bit of quality out of PC based music systems.

And that's about the most this reviewer can squeeze out of a single cable review without resorting to the unrelated ramblings that TNT tries carefully to avoid. No doubt most of you will find it somewhat obscene to pay that amount of money for a USB lead. But believe it or not, VertexAQ will hardly need to market it!

Not long after I submitted this review to the editor, VertexAQ contacted me and asked me to try the Illimani between my USB hard drive and the PC. I did so, and at the same time mounted the USB drive on a block of granite. I had carefully listened to my main system that uses a Logitech SB3 prior to making the changes, and when I went back to listen, there was a definite improvement. The Q sounds on the Roger Waters 'Amused to Death' album had come out from the speakers approximately another foot (30 cm) into the room. On a jazz recording the piano, double and bass, and drums were all more clearly located within the sound stage. I wasn't too surprised by this having already noticed that when using a USB DAC, playing music from a USB stick (ie solid state memory) it sounds better than when the music is stored on a hard drive. There is clearly more to digital music than ones and zeros moving from point A to point B!

There have apparently been a number of enquiries to TNT regarding the comment that I made about moving ones and zeros from A to B, and I have been asked to explain that a bit further.

I don't subscribe to the theory that ones and zeros are ones and zeros, and providing they arrive at their destination, eg DAC, in the right order and at the right time, that nothing else will influence the sound. If that waw the case, we could not hear differences between cables used to carry a digital signal(our editor says that analogue cables tend to sound better to him than digital types for SPDIF), or between electrical SPDIF and optical TOSLINK, or between inferfaces that use coupling transformers and ones that don't etc. In the case of a USB lead, there are other factors. They also carry a 5 volt supply in addition to the digital signal. Finally there is the matter of any cable mechanically linking two pieces of equipment together and providing a 'bridge' for mechanical noise to move from one to the other, particularly not good when one of those pieces of equipment is a noisy computer.

The editor also wanted me to say whether I thought the cost of the Illimani was worth the improvement that it made, and that is a particularly difficult to call to make (for what I would hope are obvious reasons). There is no doubt that if you look at the cost of the Illimani against a standard USB lead it isn't worth the money. However, the pursuit of the ultimate hi-fi system for those that want to go to the limits does involve the law of diminishing returns. If you have spent a fortune on hi-fi, and then discovered how much improvement the VertexAQ gear makes, you will probably consider the Illimani is worth its price to you. As I said above, the Illimani is going to appeal to existing VertexAQ customers.

I'm aware that the review of such an expensive piece of hi-fi that produces only a small improvement will cause debate. Should we as reviewers refuse to write about such items? Should we play it safe? Should we avoid controversy? I think that it would be a very boring world if we did so!