In Part 1 we examined some of the destructive effects vibration may have on our experience of audio equipment. Part 2 will begin to listen to some products that claim to ameliorate these problems

Sounds complicated? It gets worse. The pick-up cartridge is merely a little electrical generator being driven by the turntable motor, so the quality of that drive affects every aspect of the cartridge output. Conventional wisdom used to suggest that if the motor spins at the correct speed reasonably constantly all would be well and measurable wow (slow variations below the audio bandwidth) & flutter (rapid variations near or within the audio bandwidth) would be minimal and any residual effects could be smoothed with a big heavy flywheel called the platter. If the motor vibrates (and it will because nothing is perfect), conventional wisdom suggested that this will raise the playback noise floor (motor rumble) and various systems of belts and springs have been employed to minimise these effects.

Then the whole thing is chucked into a noisy environment (the listening room) where it is excited by mechanical vibration through the structure of the room, principally from the speaker output and acoustic energy through the air, again from the loudspeakers.

The little wiggles in the vinyl surface can be just microns across. Drag a human hair along the side of your stylus with the system volume setting at a typical playback level. You are hearing the stylus transcribing the roughness of the surface of hair, that's how sensitive the cartridge has to be to tiny surface textures. With the amount of energy, airborne & structural, in the room this sensitive little device needs all the help available to keep that spurious vibration away from its task of following the groove wiggles.

If the stylus was the size of a house, its task of accurately tracing the subtle instrumental overtones of a violin or a cymbal could be as small as the tread pattern of a tyre. With this in mind it amazes me how much information we hear from even mediocre systems, and illustrates how useful it might be to introduce more vibration control elements.

I invited several companies to contribute their products. The standard of response fell into 2 categories:
1. British manufacturers & importers
2. American Manufacturers

Barry Kohan, President of Bright Star Audio, manufacturers of Isonodes sent information and products immediately. This company have won Stereophile Accessory of the Year 4 times and their website is an excellent source of technical discussion and explanation of their philosophy & products so I won't repeat it here. The Isonode is the simplest & most inexpensive of their range. It is a hemispherical soft foot made of some kind of polymer exhibiting plastic & elastic qualities best described as squidgy. Despite capacity for enormous deformation the material has excellent memory and returned to shape after every use.

Robert Stein, of UltraSystems was also very helpful, promptly offering tips & suggestions for their Polycrystal ISO-3 isolators. These are again best described on their website, but in essence are multi-radius cones manufactured from clever stuff designed to make the best of both worlds: vibration dissipation with firm support. There are notches on 2 sides which might be for handling but might equally be for vibration reasons, given that a notched bell doesn't ring.

The UK distributors of Clearlight RDC (Resonance Dampening Compound) cones & cups failed to respond to emails & phone messages, despite several attempts. Their cones are therefore excluded from this review, but their cups have been included as they are the only product of their type.

Particularly irritating was Steve Mason's lack of response from Spectra Dynamics (UK based makers of Foculpods, Polipods & Deflex loudspeaker treatments) as I have purchased many of their products in the past for pro-audio installations. They are also not included.

Stone Audio, importers of Vibrapods have also been disappointing in their tardy response, although the manufacturer has promised a direct supply that should arrive before Part 2 of this test.

The products
Squidgy products in this test might be compared to a spring with internal losses like a coil-over shock-absorber in a car or motorcycle suspension (in the way that the early Leyland/Morris/Innocenti Mini car used a rubber cone as suspension and Spectra-Dynamics who make Deflex also do Mini suspensions too). It is a flawed comparison in that the Isonodes behave like a multiplicity of spring rates and damping rates combined in one hi-tech blob. I did try to measure their compliance by conventional means but there was no single derivable figure despite my bizarre assemblies of weights & levers.

The BrightStarAudio Isonodes are the submitted named product in this category tested in this review. I did test alternatives from other manufacturers and similar generic products from household & industrial suppliers, including ferrules for walking sticks! They are shown inverted on the website making them look like little U.F.O.s: 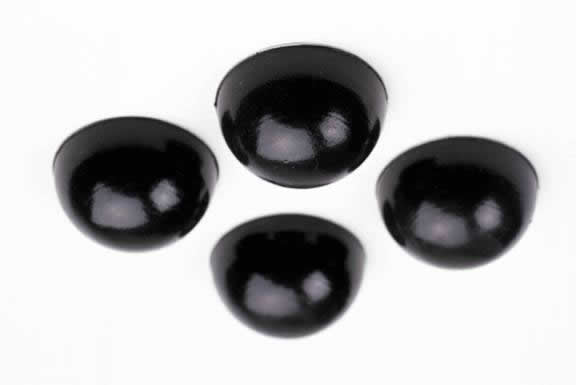 "Polycrystal is a composite made up of numerous inert materials crushed to the sizes of their crystalline structures. The result is a high density material with extremely irregular boundaries between the interlaced crystals, which dissipates energy within the Polycrystal construction" it says on the box, and who am I to argue? They are very inert when tapped, and they bounce when dropped on a tiled floor and that is the full extent of my material analysis of this product.

There is also an intermediate kind of product available from hardware or ironmongery stores. Cork pads are really cheap and available in self adhesive or plain varieties in several sizes. The Ringmat system is based on cork so this seemed like a good idea too.

Also a much modified Thorens TD160S fitted with SME3009 series II improved as an example of a conventional-plinth subchassis turntable.

Plus a hi-fi system of course.

Human memory is an unreliable method of test data storage, so I devised a recordable test data strategy. I chose a reference condition to which I compared each set of products. Each was compared only to this condition in order to ensure repeatability.

A trial session noted 17 different aspects of the sound or musical performance that are noticeable altered by these products and these were written out in a table. These are all subjective judgements and the use of numerical notation does not imply any attempt at objectivity; and there has been no application of clever qualitative data management (e.g. Grounded Theory). The qualities are a mixture of musical ones and hi-fi parameters. Compared to the reference the test sample could be marked in each parameter:

The reference condition of each support's standard spikes or pads was used between each test item. The totals were added up out of curiosity and confirmed the immediate impressions.

Spikes: 4 spikes is terrible. No amount of adjusting will get the pressure exactly equal between them. The Apollo shelf originally came (15 years ago) with little steel discs to put between spike & chipboard shelf and this made the sound even worse. Bashing the chipboard down onto the spikes was better but removing one spike altogether (front-right spike where weight is lowest) was much better still. The same applied to anything with 4 solid feet (even my old Linn LP12 sounded better with one central rear foot despite their obsession with system optimisation). 3 spikes under the glass shelf was the better spike combination, but bettered by all of the stiff products under test.

Isonodes: these scored the most minuses as well as an almost equal number of plus points compared to the reference. I tried various ways of supporting the turntables with them, including sandwiched between boards & shelves and every time the same results. The only significant areas of improvement were in human voices and mid-band complexity but they destroyed every musical aspect of the performance. Pace was sluggish, rhythm fell apart, transients were softened, bass lost all clarity, impact and tunefulness. In the later electronics support tests these really do well but they do not belong under these turntables.

Polycrystal: scored no minus points at all. Compared to the reference they made an audible improvement in almost every area of performance. They only managed 2 points in 2 areas (male voice naturalness & complex crescendos) and only failed to make a difference in just 2 areas (soundstage depth & height) but they were clear winners.

On the Gyro SE they worked best facing upwards under the shelf, two at the front corners and one centre-rear. I tried them between the shelf & the Gyro's 3-legged Perspex chassis, but this meant using shims to level the system so it is not recommended. The difference is more dramatic with the conventional plinth Thorens where they worked best facing up to the two front corners of the plinth and facing down at the centre rear. Readers can guess how many permutations & combinations I tried.

RDC cups: these are unique in that they can be used on top of the spikes that are already fitted to many supports, or alternatively in combination with other products like their own cones or the Polycrystal cones. My Origin live shelf has 3 spikes welded to the frame so there is no chance of slack, or vibration as there would be with screwed spikes. The RDC cups were the best of all between the Origin Live frame and my laminated glass shelf. Under the Gyro SE adjustable aluminium feet they made very little difference and under the Thorens they were not as good as the Polycrystal cones. I tried them in combination with Michell Tenderfeet (aluminium cones) where they were almost as good as the Polycrystal cones.

The generic cork pads were good under the laminated glass shelf but not under the hardwood, chipboard or mdf shelves.

Under turntables squidgy products are not a good thing.

With the right peripheral support laminated glass provided more detail than any other shelf material, but sounded predictably glassy with the wrong support. Hardwood would be second choice or even sometimes first choice with some less sophisticated frames. Chipboard was clunky & mdf dull.

The Polycrystal ISO-3 cones outperformed any other product under the glass shelf, except on the Origin Live support. Here the welded spikes topped by the RDC cups was marginally better for bass tightness & complex crescendos. I would be really pleased if there were Polycrystal cups for comparison.

The Thorens benefited even more dramatically from the Polycrystal ISO-3 isolators (cones) than the Gyro SE, perhaps because there is much more plinth to vibrate.

None of the other freestanding products (including those unnamed) were better than the Polycrystal ISO-3 for supporting the turntable shelf. The Gyro SE was better on its own feet than any of the alternatives tried but the Thorens improved by having a second set of Polycrystal ISO-3 between plinth & shelf as described.

And in every case 3 points of contact were better than 4.

Prices seem to vary around the world but are less than a low-budget interconnect and are therefore good value for the magnitude of improvement they bring, with no drawbacks. These differences are much greater than a similar spend on interconnect upgrades.

Part 3 will try the same tricks with amplifiers.