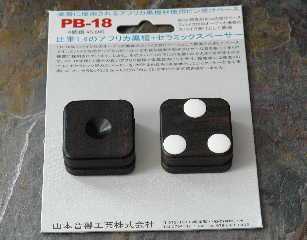 Yamamoto Sound Craft's extensive range of ebony, ceramic and metals tuning products include two variations specifically designed for loudspeaker cabinet support tuning. While all of their ebony 'setting bases' may prove useful as speaker supports or isolators, and the V-groove supporting bases VB-25 & VB-18 (review to follow) longitudinal bases are designed principally as speaker supports, the PB-18 African Ebony Spike Receiver Base are the only products in the present line-up marketed exclusively to tune the spikes or cones already fitted loudspeaker cabinets or stands.

The Yamamoto Sound Craft PB-18 are manufactured from AFRICAN ebony that is nearly 30% denser ebony than the striped SouthEast Asian ebony of their inexpensive PB-22 setting bases reviewed last time. Each receiving base has a countersunk cone routed from one surface and three (hooray because three is stabler and better sounding than four) ceramic discs in machined sockets on the opposite face. The ceramic discs are either interference fit or very firmly adhered in place, because there is no trace of adhesive or hardener residude so I suspect the former. The fit is superb and the exposed surface is radiused to provide approximately 1mm of clearance. The PB-18 are designed to be used directly on hard floors. I imagine a heavy speaker would cause the ceramic domes to settle into softwood (pine or deal) floor boards and reduce the effectiveness of the PB-18. Mr Shigeki Yamamoto recommends masonry floors and experience in many listening rooms leads me to agree with him. That is how I tried the PB-18.

All my speakers have three spikes or cones or equivalent so two of the beautifully made PB-18 remain in the packet throughout the test. Hardened steel spikes, brass spikes, aluminium cones (Michell) and granular cones (RDC) are all available to test with the PB-18 and all nest neatly in the coutersunk cone on the PB-18 top surface. Interfaced directly with the slate flagstone floor of my listening room, the top 3 order of merit under the Hammer Dynamics 30cm driver transmission lines and the Focal Audiom 12VX2 reflex bass boxes is:

If PolyCrystal had not stopped being made, I am sure their PolyCrystal compound covered brass cones would have been best, as my experience with their $2.95 cone cups was way out of proportion to their cost and size. The RDC cone cups work better than their cones (whether with their cones or with other spikes) and are a more suitable size for speakers, but still the tiny PolyCrystal cone cups sound better (although I wouldn't leave them under speaker spikes as they are too small). The tiny PolyCrystal cone cups will not be compared in this review because it is impossible to get them steady and level on the uneven surface of the slate flagstones. The RDC cone cups will be compared. The Michell Tendercups (similar size made from aluminium) will also be compared.

Immediately apparent is the increased scale of soundstage. Width gained +2 on my rating scale, extending beyond the outer edges of the speaker cabinets, but gaining continuity at the centre too. The delusion of height (I still maintain stereo height has to be a delusion prompted by subtle psychoacoustic cues rather than directly from phase information present in the signal) also gains +2, mostly above, but also a little below the main Hammer driver axes. Depth gains +1 and realism/stability also gains +1. The whole soundstage gains in scale and tangibility.
"Soundstage?" stage left, the plebs' voices rise in incredulity, "The old fool never mentions that first, it's usually at the end, almost as an unimportant afterthought."

Inded, as usual I initially relax to enjoy the musical parameters of rhythm and pace and pitch and melody but was taken aback by the bigger lump of sound lurking at the speaker end of the listening room. There is no discernible difference in PRaT or treble qualities with the PB-18. Vocal and instrumental timbre are slightly more realistic and convincing (+1) with the PB-18 set in place.

Bass pitch and tunefulness is slightly improved as is bass speed (as might be expected from a truer interface with the unyeilding slate floor). The brass spikes have gradually eroded in contact with the slate, to the extent that they now sport 2mm diameter circles where the point once was. This is an inevitable consequence when soft metal meets hard stratified stone. An interface like the PB-18, if present from the start of a spike's life would surely extend its pointy service life.

Micro-dynamics and macro-dynamics both increased by +2. Tuning devices often affect only one or other of these two important conveyors of the nuances of musical performance, perhaps the combination of materials in the Yamamoto Sound Craft PB-18 enable the PB-18 to enhance both these qualities. The mix of brass and PolyCrystal on their little spike sockets didn't quite pull off the same trick, but they only cost $2.95. The PB-18 invites the old cliché musicality.

I did not test whether four PB-18 interfaces improve four spike situations to approach the performance of three spike situations. All tests were undertaken with three spikes or cones, I'll try four when I replace my camera tripod with a quadropod.

The Yamamoto Sound Craft deliver an immediate and audible improvement over the loudspeaker spike-to-floor interface. An improvement between stand spikes and floors too, although somewhat less stable if the whole caboodle is knocked.

I resent paying for four rigid speaker support devices when anyone with ears must attest to the superiority of three, even if a flexible support is added in a fourth position.

The PB-18 have the strongest effect under the baffle spikes, so you could buy one set of four and use two each under the spikes that support the baffles of your stereo pair and use an alternative support for a single central rear spike or cone. At the price, one set of these Yamamoto Sound Craft PB-18 Spike Receivers this position is a bargain.

Two sets of Yamamoto Sound Craft to treat a pair of loudspeakers is still much better value than cable upgrades anywhere in your system. I am sure all manner of 'objective' tests could be devised to suggest an explanation for the differences we can hear with such tuning devices, but such an excercise is futile to anyone except a manufacturer seeking to improve or develop their products. For less than 90€ (at Summer 2009 exchange rates) two sets of Yamamoto Sound Craft will upgrade a real stereo system. The improvement will be less than if that sum were spent on source component support, but better than wires or amplifier supports.

The Yamamoto Sound Craft PB-18 Spike Receiver Base are intelligently designed, well manufactured, simple improvemnts sold at a price which reflects their materials. The PB-18 African Ebony Spike Receiver Base (to remind you of its full name) does what as it promises.