A pre-power combo from Germany 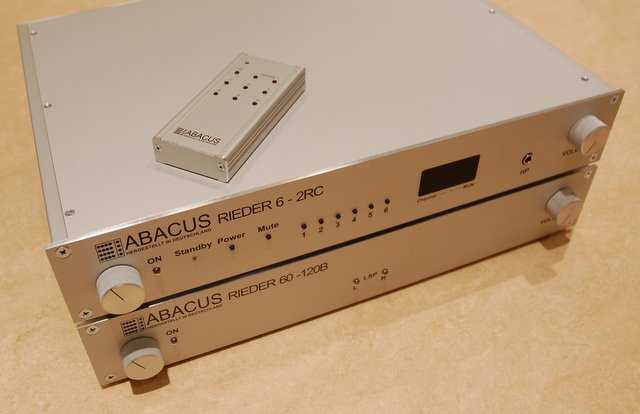 Abacus is a German hifi brand and quite unknown outside of their own country, even if they seem to have a bit of a reputation there. The website and manuals are all in German, with no translation available. Abacus make a range of active loudspeakers and a number of amplifiers. I'm currently interested in power amps, so I requested their top-of-the-range model, the 60-120B in the 'powered edition', which means that this version has a larger power supply than the standard 60-120B. The numbers 60 and 120 refer to the power rating of this amp in stereo and mono mode. I was only interested in the power amp, but Abacus' Karl-Heinz Sonder told me that the preamp and the power amp are designed to work together and send me a preamp too. ABACUS claim their preamps use 'line drive' technology, which makes them completely immune to the quality of the interconnect used between them. According to Karl-Heinz I could use 'barbed wire' and still get excellent results. An interesting experiment that I nevertheless didn't execute.

These amps are distinctly different to any other amps I’ve had in my system until now. To begin with, the build quality, although sturdy enough, reminds me of DIY projects and the whole case has a clear non-high-end feel about it. And the power amp actually has a volume control. This is realised differently than in most amps, as the attenuator is in the feedback loop of the input opamp, so not directly in the signal path. This is claimed to be superior. The power amp also uses its output transistors in a different way, with the collector as output. This enables the output stage to deliver current more easily according to Abacus, and makes this amp a bit like the Porsche 911, I suppose: German and 'the wrong way around'.

The preamp is a straightforward affair, the only luxury being a headphone output on the front. There are 6 inputs, with no phono stage on the review sample but an MM stage can be specified for only 69 euro. There's both a fixed and variable output. The display is nice and big and the remote control is excellent. Actually, the preamp was a pleasure to use and feels like a well sorted bit of kit.

I do have to say that I am a little bit puzzled by the volume control on the power amp. It makes perfect sense when you only have a single source, in which case the power amp turns into a perfect, minimalist and very affordable integrated. But most people have more than one source and will have to add the accompanying preamp, thereby almost doubling the cost of amplification. And no matter how good the preamp is, it will have difficulties competing with no preamp at all. Annoyingly, even with the preamp in use, the power amp's volume control is still active, leaving you with two volume controls. Why not just have two version of the 60-120B amp: one with volume control and a selector switch, and one that is just a pure power amp? The current solution seems a strange half way house to me. 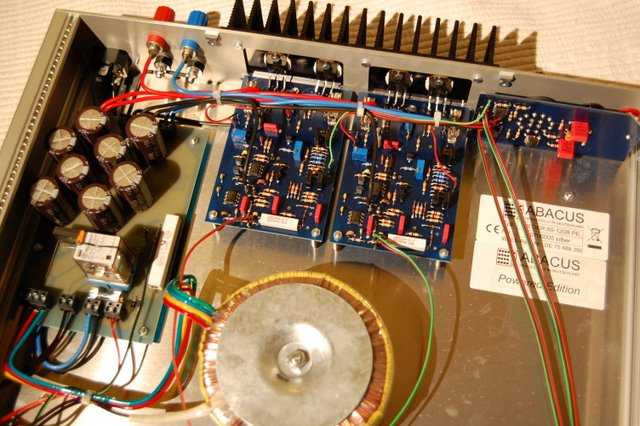 Looking inside the power amp shows a neat and sensible setup, with a separate PCB for the power supply, identical power amp sections for each channel and a small PCB for the input section. Component quality is good enough, but certainly not highly audiophile and tweakers will be tempted to replace things like the MKS input capacitors, the opamps and perhaps the rectifier diodes. The case could also do with some damping, in a perfect world.

I started with just the power amp, being used as a single source integrated, without any preamp. I later tried it with both my Django transformer linestage as well as with the Abacus preamp, but the first impressions are for just the 60-120B powered edition, used on its own. In all cases the speakers were my Dynaudio Contour 1.8 mk2 and the source was my Astin Trew At3500 CD player, upgraded with the EAT ECC88 valve.

The manual states that the 60-120B will keep your speakers in an iron vice and produces a high-end sound. Both these statements are not really true: I have heard tighter bass in my system and the sound is not refined enough to be called high-end. But this doesn't matter one bit, as the 60-120B actually sounds quite good, certainly for the money. That bass might lack the last little bit of control, but it is precise enough and has a pleasant touch of warmth to it. And the mids and highs might be a little bit rough, but the whole sound has an exciting energetic and dynamic feel to it which brings out the music in an engaging way. It will also go plenty loud enough, even with my, slightly power hungry speakers.

The most remarkable thing about this power amp is the way it just sounds ‘right’. I always hate it when reviewers say this, but in this case I feel reduced to using the expression myself. When you analyse the sound of the amp there is actually nothing that really stands out, with the possible exception of dynamics, and if you would score it for all the ‘hifi parameters’ separately it wouldn’t reach a very high total score at all. But in reality is also doesn’t do anything really wrong and the whole is very much better than the sum of the parts in this case. It simply manages to convey the music in a believable way, even if it isn’t perfect. Perhaps it is the even tonal balance, maybe it's the fact that this amp is quite good at PRaT, I don't know, but convincing it is.

To be honest, I was a little bit surprised at this amp from time to time. It is capable of holding its own when being compared to more expensive amplifiers, by simply being itself and allowing the music to be enjoyed. This is not to say that it is without flaws, and the most serious problem is a slight tendency to induce fatigue after a few hours of listening. Some people are more concerned with this than others, but for me this is important. On the other hand, I don't think there are many power amps in this price range that do much better in this respect, and if they do you pay for it with a less engaging sound. You pays your money and you makes your choice, I suppose.

When I added my Django preamp I didn't detect much difference. Of course, there's lots more in the signal way: an additional set of interconnects to begin with, but also all internal wiring, switches and the transformers themselves in the Django. Inevitably this will degrade the sound a little bit, and the 60-120B lost a tiny bit of its directness this way, but the difference wasn't enormous. Swapping my Django for the Abacus preamp did make a difference. Now the sound seemed a little bit more processed and lost some of its immediacy. Everything was just that little bit flatter and sounded somewhat grey, as compared with the 60-120B used alone. When I removed the 6-2RC preamp again and went back to using the 60-120 as an integrated I had the feeling the music was liberated again. The preamp makes things feel somewhat restrained, choked even. Without the preamp the 60-120 had more air and a bigger soundstage with better focus. There's still an edge to the top end, but sibilance is much better controlled now and individual instruments and voices have much more personality. In integrated mode, the power amp also sounds louder while the pre-power combination was slightly muffled and made me want to turn up the volume all the time, just to bring things alive. In all fairness I do have to add that the Django as I use it is about twice the price of the Abacus preamp while lacking a remote control and a headphones output. 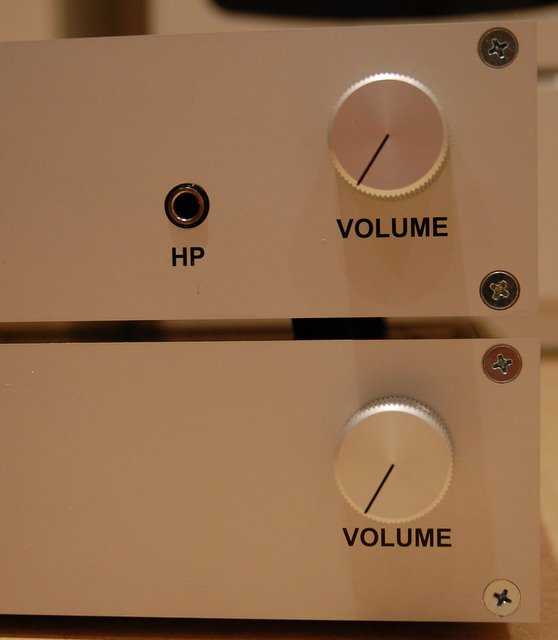 I’m more impressed with the power amp than with the preamp. Not that there’s anything deeply wrong with the pre: it actually works very well and sounds about as good as you would expect at the price, but the power amp simply is better value. The power amp does have a particular personality though, that has to go with your system and preferences. It lacks some refinement, but also is very engaging and enjoyable. The only problem is that it can cause some fatigue after a while, but if you can live with that then this is a fine amp for the money. The addition of the preamp almost doubles the price of amplification and takes it into a range where very serious alternatives are available. I'm afraid I would prefer a good integrated, like the Anatek A50, to the Abacus pre and power combination. But I do not hesitate to recommend the 60-120B power amp. Actually, if you only use a single source it is a bit of a bargain.

ABACUS is not present in the UK. The productions capacity does not allow flirting with new national markets at the moment. However there will be a bilingual website soon.

ABACUS does not see itself as a typical high-end-producer; in fact we are developing audio products from a pure physical point of view. Many of the typical high-end-philosophies and miracles are not fulfilled by ABACUS. That is why we offer solid products at fair prices, even though handmade in Europe.

In ABACUS circuits volume controls are not in the signal flow, but directly control the amplification. A power amp should have a variable sensitivity, for being adapted to different levels of different sources. The volume control of the 60-120B adjusts the sensitivity and even acts as volume control, if no preamp is used. One could also use fixed resistors. Maybe this is High-End, but not really better, especially due to the fact that ALPS-precision-potentiometers are used in ABACUS amps.

ABACUS claims, that ABACUS preamps are sound neutral. If the reviewed 6-2RC has changed the sound, this means that ABACUS lies or the device is not working correctly. Perhaps even the difference is caused by the special character of the other given components, or by the cable with its inductance, capacitance and resistance, or even everything at the same time.

As long as the truth could not be measured, the general confusion will survive and also the discussion about which one being the best. For 25 years ABACUS has been questioning why still products of other manufacturers are bought... Also TNT cannot give the answer!